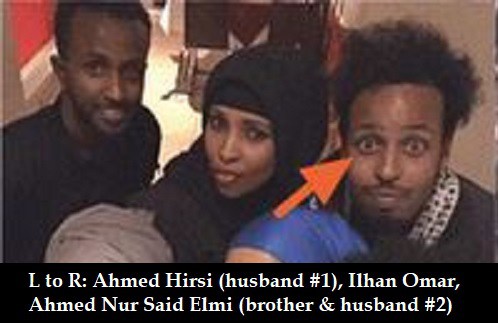 Immediately after being elected to her current seat in 2016, Omar faced allegations — soon backed by a remarkable amount of evidence — that she had married her own brother in 2009. (They officially divorced in December 2017.)

Omar said she had married “British citizen” Ahmed Nur Said Elmi in 2009, but that the allegation that he is her brother is “absurd and offensive.”

According to official student enrollment records archived by St. Paul Public Schools and the state of Minnesota, an “Ahmed N. Elmi” was enrolled as a senior in the Class of 2003 at Arlington Senior High School in St. Paul, MN, from September 6, 2002, until June 10, 2003. He graduated and received a diploma.

The enrollment record states that “Ahmed N. Elmi” was born on April 4, 1985 — the same date of birth for Omar’s husband, Ahmed Nur Said Elmi, in both Omar’s 2009 marriage documents and her 2017 divorce proceedings.

Steinberg conducted an extensive background search, but did not find any other person named “Ahmed Nur Said Elmi,” “Ahmed N. Elmi,” or “Ahmed Elmi” with the birthdate April 4, 1985. Omar’s husband and the boy who attended Arlington Senior High School in St. Paul, MN are one and the same.

Steinberg contacted several members of the Class of 2003, and was told that Ahmed Elmi “was living with his father” while attending Arlington Senior High School. Elmi’s father was the same man Ilhan Omar has always publicly referred to as her own father: Nur Said Elmi Mohamed.

No one responded, but Omar intimated in a tweet that “the Republican/right-wing propaganda machines” are behind the allegations she had committed incest by marrying her brother.

The motivation for the marriage [to her brother] remains unclear. However, the totality of the evidence points to possible immigration fraud and student loan fraud. As this implicates Rep. Omar in multiple state and federal felonies, I have contacted the U.S. Attorney’s Office in Minnesota to submit all other information uncovered during our investigation.

Back in August 2016, Scott Johnson of Powerline revealed that when Ilhan Omar married her brother Ahmed Nur Said Elmi in 2009, she was still married to Ahmed Hirsi, whom she’d married in 2002 and with whom she had three children. Johnson wrote:

Inputting the name Ilhan Omar, I have confirmed both marriages as noted in the Somalispot post via the online Minnesota Official Marriage System….