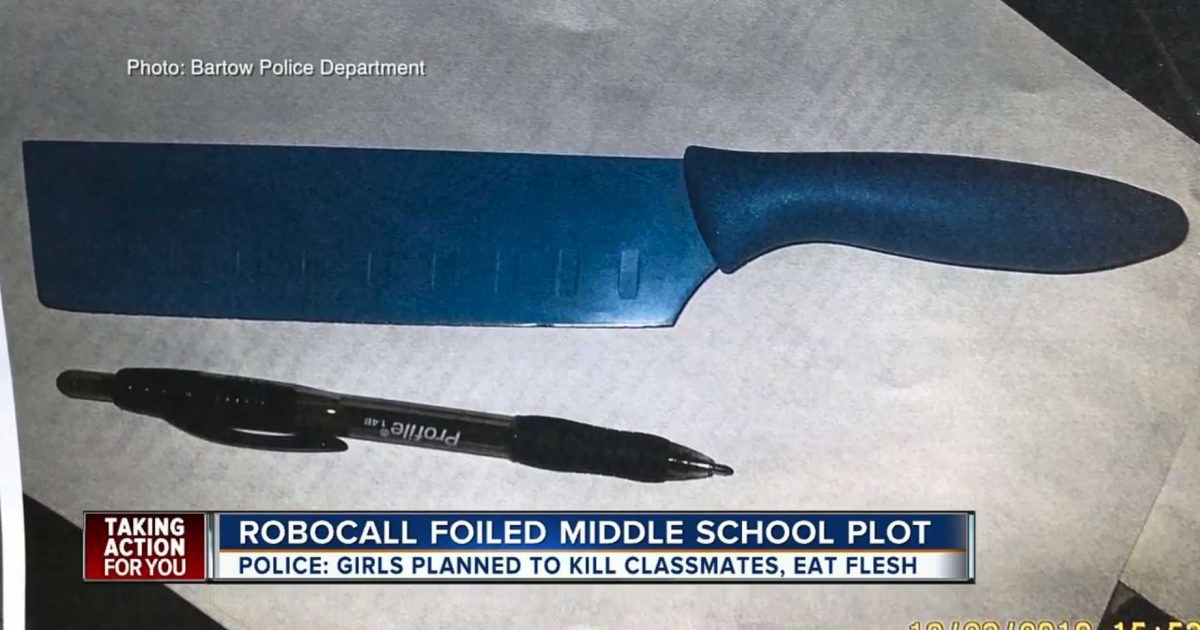 On Wednesday, the Associated Press reported that authorities foiled a plot by two Florida middle-school girls who planned to kill their classmates, drink their blood and eat their flesh.  The two knife-wielding girls, aged 11 and 12, were arrested by the Bartow, Florida, Police Department and now face charges of conspiracy to commit first-degree murder and possession of a weapon at school.

According to the AP:

The girls planned to stake out a school bathroom and wait for smaller students to enter, according to the police affidavit. They planned to cut their victims’ throats, cut up their bodies, eat the flesh and drink their victims’ blood, authorities said.

The students then planned to fatally stab themselves.

“The plan was to kill at least 1 student but were hoping to kill anywhere from 15-25 students,” the affidavit said. “Killing all of these students was in hopes it would make them worse sinners ensuring that after they committed suicide … (they) would go to hell so they could be with satan.”

Detectives said the girls devised the plot while watching “scary” movies at one of their houses over the weekend.

According to reports, the plot was foiled after one student warned a teacher on Monday that the girls were overheard discussing the planned attack.  One of the girl’s mothers apparently received an automated call telling her that her daughter was not at school.  She called the school, prompting a campus-wide search for her.

“Once in the principal’s office, the girls were told to empty their pockets, which revealed a knife and knife sharpener,” ABC Action News reported. “After that, their bags were searched, and several weapons including a pizza cutter and butcher knife were found on the girls. The two admitted to planning to kill students as they entered the bathroom.”

Parents and guardians of children in our Bartow Schools: I understand that the recent news of a plot to kill students at Bartow Middle School is troubling. In fact, it shook me to my core when I was notified of it. However, I want to make it clear that your children are our most precious citizens here in the City and we do everything we can, every single day to make sure our children are safe. We work very closely with the Polk County School Board and I want to assure you that I will do everything in my power to ensure safety.

I am very proud of the staff at Bartow Middle School and my staff at the Police Department for thwarting this plot from becoming a tragedy. There are several measures in place to make sure our children are safe and that ALL threats of violence are addressed. In this isolated incident, these protocols worked. I believe in these protocols and we will continue to follow them.

Remember, if you see something, say something. It worked in this incident.

Fortunately, no one was harmed.