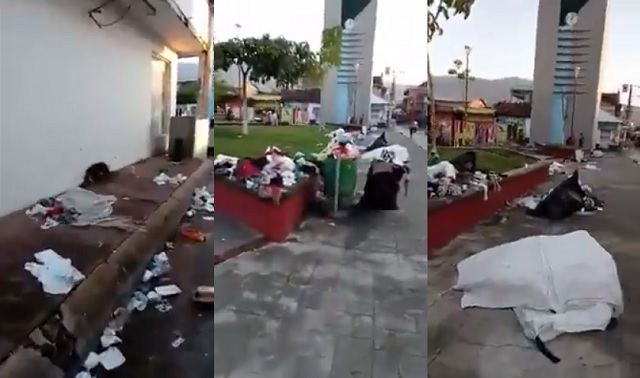 Viral video purportedly shows a Mexican woman lamenting how a park in her city was left covered in trash with wasted food and clothing strewn about after a group of migrants passed through.

“This is Juarez street, of the central park, and the migrants left and left us the garbage,” the woman can be heard saying in Spanish. “Like we had said before, what a waste of food, when they said they don’t even have enough to eat.”

"This is Juarez street, of the central park, and the migrants left and left us the garbage."

Viral video purportedly shows streets in Mexico covered in trash and wasted food after migrant caravan passes through on the way to the US. pic.twitter.com/Kb29QNXYiM

“And the fact that they travel to a foreign land, doesn’t mean they shouldn’t at least be clean and avoid leaving the trash everywhere,” she says. “The truth is it’s not fair that in place that offered its hospitality, they left all this trash, and the clothes that were so kindly donated, also left strewn.”

She continued: “So it begs to question, are they really people that have needs, educated people, tranquil people, clean people? Or is there something else behind this caravan?”