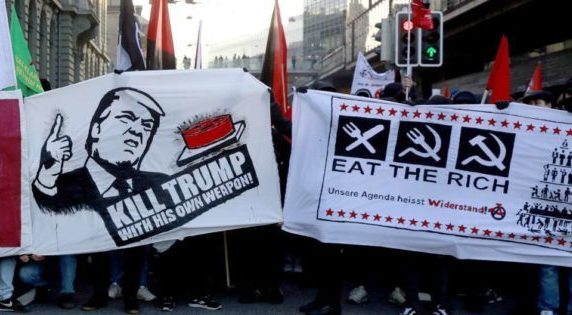 While mainstream media outlets balk at the suggestion that they may have been guilty of ramping up the division and political tensions in the United States, one of those outlets actually published an assassination story about president Donald Trump.

While those in the mainstream media blame Trump’s inflammatory “fake news” rhetoricfor half a dozen bombs mailed to prominent Democrats and CNN, the New York Times ran a short story envisioning Trump’s assassination.  The story detailed a failed assassination attempt by a Russian but what happened next was incredibly disturbing.

Frustrated by the failure of the Mueller investigation to turn up the requested dirt on their “enemy”, Trump, the media “resistance” asked a few spy novelists to predict a more “appealing future” for the president in the Times‘ literary supplement., according to RT. The results revealed some shoddy writing work, even putting aside their predictable endings. Spoiler alert: Trump was colluding with the Russians all along!

The story is typical leftist fantasy garbage: violence, death, and permanently silencing those with whom they disagree.

The president didn’t seem to notice. He waved, in his desultory fashion. The Secret Service agents clustered around him, ushered him toward the armored limo idling outside at the curb.

The Russian waited until they were a few steps past before he drew the gun. He sighted on the center of the president’s back, and squeezed the trigger.

The Secret Service agent at the president’s shoulder heard the click, spun into a crouch. He registered the scene instantly, drawing his own weapon with razor-edge reflexes.

The Russian tasted failure. He closed his eyes and waited to pay the cost.

It did not come.

He opened his eyes. The Secret Service agent stood before him, presenting his Glock, butt first.

“Here,” the agent said politely. “Use mine. …” -Zoe Sharp, The New York Times

This is a highly hypocritical stance for the mainstream media to take.  On the one hand, they demand Trump cool down his rhetoric toward them, but on the other hand, they insist on publishing violent leftist trash meant to incite glee over the president’s assassination.

New York Times: Be sure to read the story we published depicting Trump getting assassinated.

New York Times: We need to have a serious conversation about Trump’s rhetoric.

Trump’s election has hastened a decline in journalistic standards that has seen once-respectable media outlets like the Times jettison fact-checking, accountability, and taste standards in favor of grinding their political axe. Journalists’ concerns about the Trump regime are not unfounded, however – his Justice Department has prosecuted more whistleblowers and leakers than even media darling Barack Obama, who previously held the record. -RT

If you think the media is not inciting violence, just take a quick look at an article by Breitbart titled, 613 Acts of Media-Approved Violence and Harassment Against Trump Supporters.

Journalism is dead at the failing @nytimes

The 2018 elections have been marked by vicious rhetorical attacks. Hillary Clinton, Eric Holder, and Maxine Waters have all been accused of calling for their supporters to physically attack GOP candidates and their voters. Several candidates actually have been attacked in the last month, and one man was arrested for mailing ricin to the White House and Pentagon.