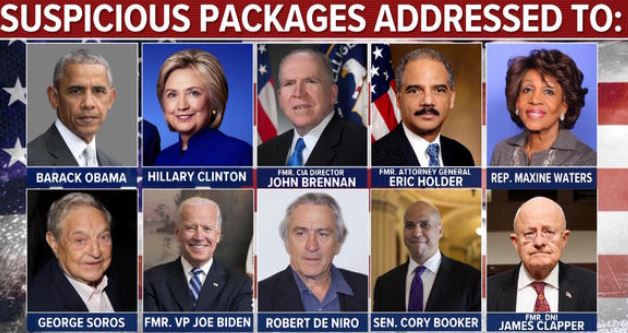 Friday morning, October 26, 2018, a man was arrested in Broward County, Florida, in connection with at least 12 packages containing what appeared to be pipe bombs sent to prominent Democrats.

All of the packages listed the return address as the office of Rep. Debbie Wasserman Schultz (D-FL) in Sunrise, Broward County, Florida.

The suspect, Cesar Sayoc Jr., 56, of Aventura, Florida was taken into custody at the Auto Zone auto parts store in Plantation, FL, after the FBI used DNA evidence and a fingerprint on the package mailed to Maxine Waters to identify him, sources said. (New York Post)

Sayoc was charged with five federal crimes — including interstate transportation of an explosive, illegal mailing of explosives and threats against former presidents. He will be prosecuted in Manhattan, and faces up to 48 years behind bars. (CBS News)

This is what the media say about Sayoc:

The Pieces That Don’t Fit the Media’s Narrative

(1) According to the New York Post, at least some of the parcels had passed through a USPS mail processing center in Opa-Locka, Florida. New York Times says: “Though investigators initially believed that some of the packages were delivered by hand or courier, they have now concluded that all 10 were likely sent through the mail, a person briefed on the matter said.”

(2) During Sayoc’s arrest, law enforcement officers were seen hauling away a white van covered in stickers, including images of Trump and anti-press messages like “CNN SUCKS.”

(3) Strangely, for a registered Republican and Trump enthusiast, Cesar Sayoc doesn’t follow any Republicans or conservatives on Twitter, not even President Trump. Instead, the 32 people Sayoc follows on Twitter include only left-wing personalities like Ellen DeGeneres, Lena Dunham, Jimmy Kimmel, Seth Myers, Barack Obama, and John Oliver. (Infowars)

However, he was identifed on MyLife (https://www.mylife.com/cesar-sayoc/e750795670848) as 56 years old; born March 17, 1962; lives in Aventura, FL; previously lived in Fort Lauderdale, FL, Hollywood, FL, and Edison, N.J.; and his political party is Democrat, before MyLife scrubbed all information on Cesar Sayoc. Fortunately, some netizen had archived Cesar Sayoc’s MyLifeprofile here.