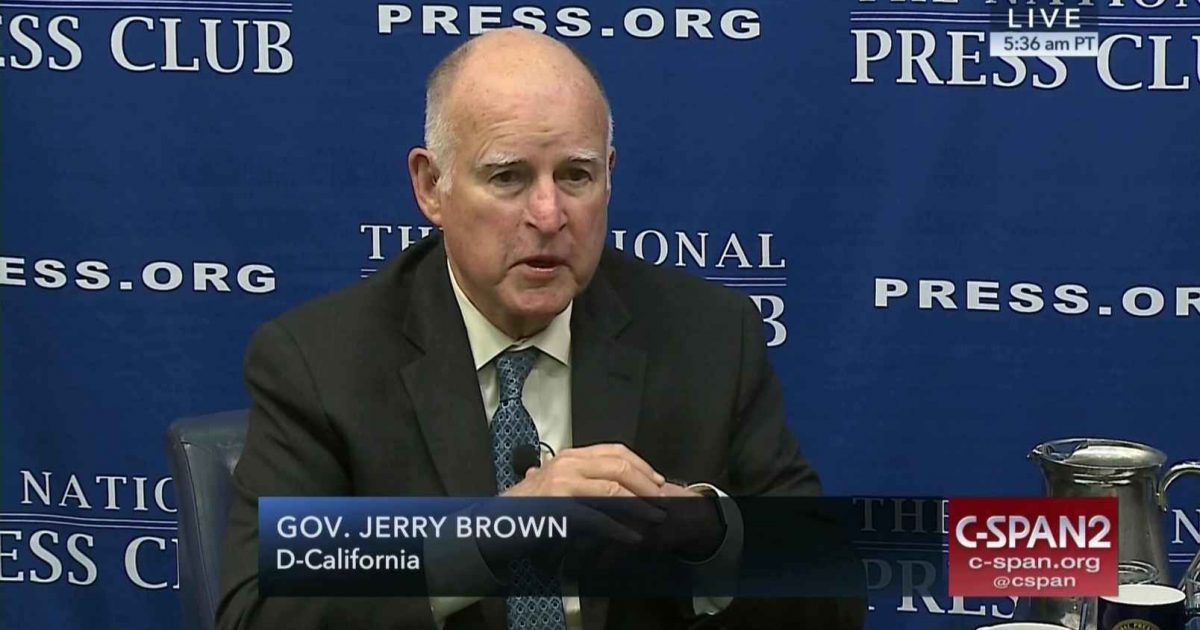 Governor Brown has really made California into a great place for criminals. His abuse of pardon powers to protect foreign criminals is the latest example. Brown has already pardoned a number of violent criminals. But the worst of them all may be Borey Ai, aka “P.J.”

By his own account, Borey Ai was a 14-year-old gangster when he killed a woman during a robbery that netted about $300.

Ai is now 37 and asking California Gov. Jerry Brown to wipe away his criminal conviction and likely prevent his deportation to Cambodia, a nation where his mother was born but he has never seen. After prison, he spent 18 months in federal detention but was freed in May after Cambodia refused to accept him — for now.

Parole officials recommended a pardon for Ai last week. Dozens of advocates turned in more than 36,000 signatures Wednesday asking Brown to pardon Ai and others before he leaves office in January.

The prospect frustrates relatives of Ai’s victim, Manijeh Eshaghoff. The governor in the last 10 months has pardoned seven ex-convicts who otherwise faced the threat of deportation to Cambodia, bringing an angry tweet from President Donald Trump in March.

There are parallels between Ai’s journey and that of the woman he killed. Both are from immigrant families who fled oppression from opposite sides of the world only to tragically intersect in a strip mall convenience store in San Jose shortly before midnight on Feb. 4, 1996.

Her son David Esh, who uses a shortened version of his family’s name, was 25 when she died.

“She bled out in less than a minute — it was instant how quickly she died. That’s the only solace I’ve had over the years; she didn’t suffer,” he told AP.

His father, Essag, was standing a few feet away and held his wife as she died, soaked in her blood.

“This was premeditated murder, accident or not,” Esh said. “They already had the money, all he had to do was run.”

Like Ai’s mother, Esh’s father had fled for his life from his home country. An Iranian Jew, he had done work for the shah before the Iranian Revolution in 1979.

“My father fled in the trunk of a car through the desert,” Esh said. “They worked hard. They sacrificed.”

Esh wants the governor to deny Ai’s pardon request. A majority of the state Supreme Court will have to agree that Ai may be pardoned before Brown makes his decision.

I don’t doubt that Governor Brown will go for it. In California, criminals have all the rights. And their victims have none.

The AP story does at least interview the victims. Much of the campaigning for Borey Ai, a brutal murderer, left out why he was in jail.

One social justice blog claims that Borey Ai “struggled — as many Southeast Asian refugees did — in the face of racism, xenophobia, and local hate crimes.”

His struggle or Kampf consisted of murdering an innocent woman for money.

The Daily Kos petition states, “Borey Ai, known to many as PJ, was caught in the raid and could be re-detained and deported at any moment. PJ entered the U.S. as a refugee when he was 4 years old. Bullied at school and on the streets, he turned to a gang for protection and acceptance. At 15, he was tried as an adult in criminal court and sentenced to life.”

No mention of the woman he murdered.

Yet another petition blames the woman whom Borey Ai killed for her own murder. “At 14, Mr. Ai and three older gang members committed an armed robbery at a liquor store. The store owner grabbed Mr. Ai’s gun, which discharged, killing the store owner. ”

Elsewhere, Borey Ai claimed, “I didn’t know I had killed someone until my co-defendant told me.”

Interestingly enough, Borey was described by the authorities as 16 at the time.

Criminal refugees often lie about their ages, as we’ve seen lately in Europe, claiming to be young teenagers, when they’re actually older. Or their parents lie on their behalf. And then the Left lies for them.