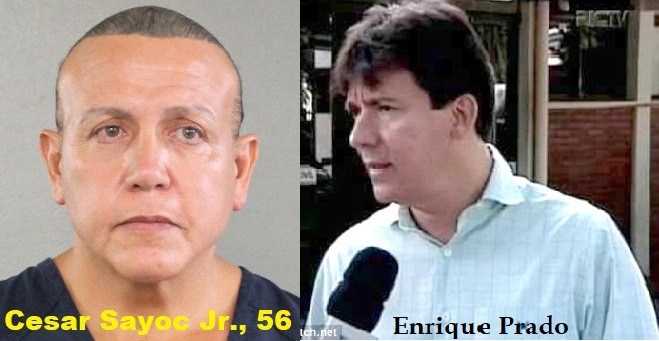 Ronald Scott Lowy is an attorney in Miami, Florida.

Lowy had represented accused package bomber Cesar Altieri Sayoc, 56, in the past (Sayoc had been arrested nine times, not including his arrest yesterday for sending package bombs to a plethora of prominent Democrats), and currently represents Sayoc’s family — his mother and sister.

Friday, in an exclusve CNN interview, Lowy described Sayoc as mentally ill — a “sick individual” who is lost and needs help, who “didn’t react like a normal individual” and “wasn’t working on all cylinders”.

Although Sayoc in a tweet had claimed to be a Seminole, Lowy said:

“Well, he was clearly not Native-American. His father was Filipino and abandoned him as a child and his mother is Italian. And he adopted this claim to being a Seminole because he was trying to create an identity. If you ask me, again my layman’s opinion, is that manifested from his lack of a father and his desire for an identity. This was someone lost…. And he found a father in Trump.”

A Seminole tribe spokesman says Sayoc has no affiliation with the tribe. (Blue Lives Matter)

Despite Anderson Cooper’s efforts to cut him off, Lowy persisted and said this at the end of the interview (3:12 mark):

“He [Sayoc] never seems sophisticated enough to do something like he’s accused of.  And I wouldn’t be surprised to find out that there were either others who helped prod or encouraged him to do this, or that the bombs in fact were so crudely made, they never could have worked, because he didn’t seem to have the intellectual capacity to plan a conspiracy like this in my opinion.”

A longtime friend of Cesar Sayoc is a former CIA officer.

In a social media post in 2016, Sayoc wrote: “I would like to wish my great friend from Academy 9 yrs military school Ricki a happy birthday and lifetime from CIA. Congrats on your invention and many successes my brother.”

Sayoc’s social media accounts have now been expunged from the net. But early yesterday morning, an enterprising netizen managed to take a screenshot of Sayoc’s 2016 post:

According to Forbidden Knowledge TV, Sayoc’s CIA friend Ricki is former CIA agent Enrique “Ric” Prado. This is Prado’s self-description on his website:

Enrique “Ric” Prado is a twenty five year veteran of the Central Intelligence Agency where he served in six overseas posts, including as Chief of Station in a Muslim country. Domestically, he served as Chief of Operations for the DCI’s Counterterrorist Center under Ambassador Cofer Black during the 11 September, 2001 attacks and the subsequent war on terrorism. He also served as the Deputy on the original bin Laden Task Force. Highly decorated, he received the CIA’s Distinguished Career Intelligence Medal (highest award given to Senior Officers), as well as CTC’s George Bush H. W. Bush Award for Excellence in Counterterrorism, among others. He is a native Spanish speaker and a graduate of George Mason University.

As C/OPS at CTC, then a Senior Intelligence Service (SIS) officer, Mr. Prado oversaw CIA’s counterterrorist efforts post 9/11 and coordinated SPECOPS activities with the NSC and FBI, as well as elite U.S. Military representatives from DELTA, and SEAL-Team Six then detailed to the CIA. Mr. Prado was also Deputy Chief East Asia Division, running CIA’s Korean Operations and previously, as Chief of CIA Liaison in Seoul, Korea. He spend his first ten years in CIA as a Paramilitary Officer serving in dangerous areas, to include 18-months in the jungles of Central America as the first CIA officer living in the anti-Sandinista “Contra” camps, and running CT operations in Peru and the Philippines. He is a former member of the elite USAF Pararescue. Upon retirement he worked as a Special Advisor to MITRE Corporation and subsequently as Vice President for Special Government Programs at Blackwater U.S.A.

Throughout his Agency career and post-retirement work in support of the U.S. Intelligence Community, Mr. Prado has developed a substantial network of intelligence operation officers, investigators, military and police officer contacts worldwide. He now brings these resources to the private sector.

In his 50-page e-book How to Get Away With Murder in America, author Evan Wright tells the story of Enrique Prado, a high-ranking CIA-officer-turned-Blackwater-employee who oversaw assassination units for both the CIA and the contractor. A federal organized crime squad run out of the Miami-Dade Police Department tied Prado to seven murders carried out while he worked as a bodyguard for a narco crime boss. At the time, the CIA declared him unavailable for questioning; the investigation was shut down before he was arrested or tried. (The Atlantic)

Prado is said to have moved a secret death squad from the CIA to Blackwater. (Wired)