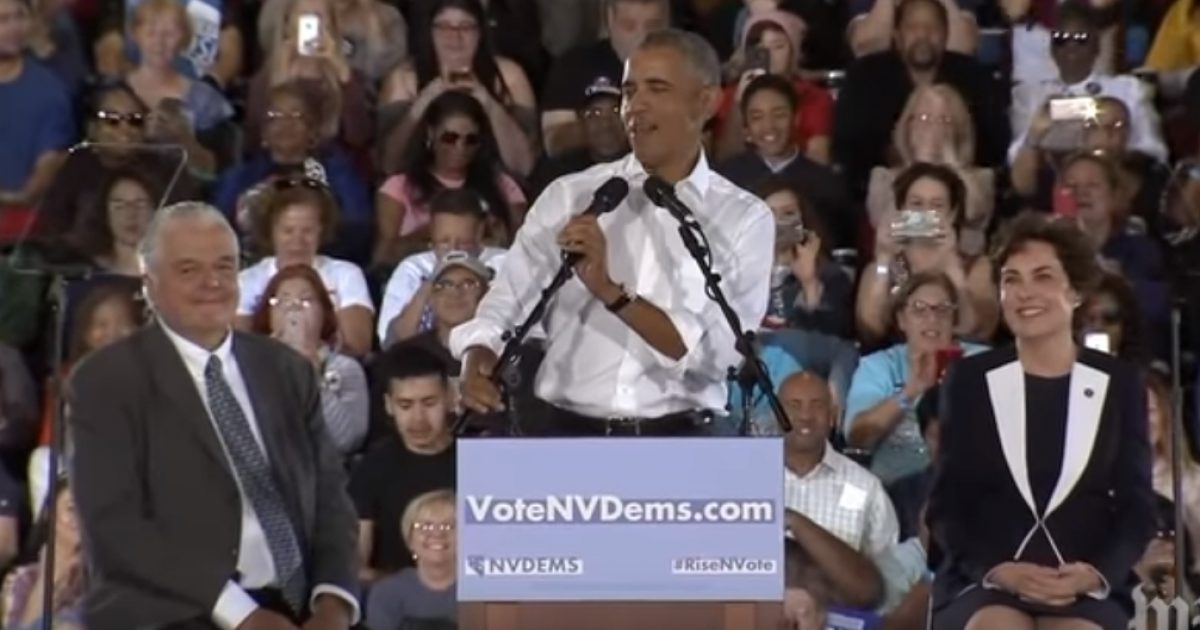 Ah yes, the Democrat Party!  They are the party of hypocrites, Socialists, Communists and alleged woman abusers, even though they claim to be for women, only so they can promote baby murder.  In the latest hypocrisy of the party that proudly proclaims that we should listen to all women who make accusations against men who abuse or sexually assault them, except when those men are Democrats, the former usurper-in-chief Barack Hussein Obama Soetoro Sobarkah has endorsed Nevada gubernatorial candidate Steve Sisolak just days after his ex-wife leveled charges of physical abuse, complete with diary entries and photos.

Lori “Dallas” Garland told The Daily Caller News Foundation that she felt like “a total prisoner” throughout her 13-year marriage with Sisolak, and said the single-father backstory he has leveraged throughout his gubernatorial campaign is “bull.” Garland also said Sisolak bruised her neck in an August 2000 incident.

Sisolak stands to be Nevada’s first Democratic governor in 20 years if he wins a tight race against his Republican opponent, Adam Laxalt.

A spokesman for the Republican Governors Association similarly called the allegations “disturbing.”

The Sisolak campaign did not deny that a physical altercation occurred between Garland and Sisolak in August 2000. The campaign provided sworn statements from Sisolak’s two daughters, Ashley and Carley Sisolak, who were, respectively, 13 and 10 at the time.

Their statements, put together, share similarities with the account Garland detailed in her diary, but said Garland was the aggressor and injured their father.

Here’s a photo reviewed by the DCNF.

Photo Dallas Garland said was taken of her bruised neck the day after the Aug. 24, 2000, incident with Steve Sisolak. Courtesy of Dallas Sisolak.

Interestingly enough, Nevada Senate candidate Jacky Rosen, who seemed to voice support for lying Christine Blasey Ford back in September by tweeting “Believe women,” was strangely silent about the allegations.

Is Ms. Rosen pulling a Minnesota Democratic–Farmer–Labor Party chairman Ken Martin, who said that he doesn’t believe a woman and her son’s allegations of abuse by aspiring attorney general of Minnesota Keith Ellison?  It sure sounds like it.

Furthermore, Garland recounted what took place to the DCNF.

Garland, whose legal name is still Sisolak, said the incident occurred on Aug. 24, 2000, the day after she moved out of her marital Las Vegas home. She said she had returned to her home to pick up her makeup, but Sisolak stopped her at the door.

Garland said there was no court order at the time that prevented her from entering her house.

She said she tried to force her way past Sisolak.

Garland said she and Sisolak pushed against each at the door for a few moments until her ex-husband suddenly “stumbled back on purpose and fell on the floor,” allegedly saying he was injured while yelling at their daughter, Carley, that she had to stay away from her “dangerous” mother.

Garland said Sisolak was 6 feet 3 inches tall and weighed over 200 pounds at the time of the incident, over double the weight of Garland, who was about 100 pounds. She denied forcing Sisolak onto the ground.

Garland said Sisolak drove a wedge between her and her children and said that it has been 10 years since she has seen either of her daughters. But she added that she had an active role in her children’s lives until they had both had graduated high school.

Both daughters have appeared in campaign ads with their father, and Garland disputes the claims of Sisolak that he raised the girls as a single father.

One of Garland’s friends also admitted that the campaign ad made her “sick.”

“He acts like he’s a single man, and I tell people he’s not a widower,” the friend told The DCNF.  “She raised those children too. But people don’t know that. It’s such a misleading ad.”

Isn’t that how most politics is played?  Misleading?

Even more hypocritical is that way in which Democrats, who without evidence or corroboration, blasted Judge Brett Kavanaugh as though he were guilty of the charges leveled against him by the clearly mentally disturbed Christine Blasey Ford.