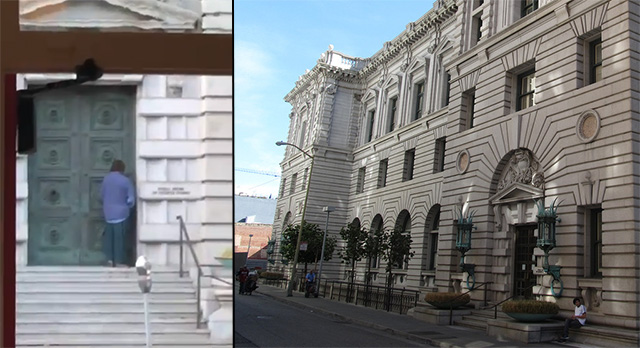 Video out of San Francisco shows a homeless man casually urinating on the 9th District Circuit Court of Appeals in broad daylight.

BetterSoma shared the video Friday on Twitter, writing: “Here in San Francisco this is how people do on the 9th district courthouse.”

Here in San Francisco this is how people do on the 9th district courthouse. pic.twitter.com/4PDIdUWBcA

The action is rather notable considering the 9th Circuit just last month ruled it’s “cruel and unusual punishment” for cops to arrest homeless people sleeping in the street.

Only fitting. That’s the court that ruled that enforcing laws against living on the streets constitute cruel and unusual punishment under US Const.

As KRON 4 reported in September:

The 9th U.S. Circuit Court of Appeals in San Francisco sided with six homeless people from Boise, Idaho, who sued the city in 2009 over a local ordinance that banned sleeping in public spaces.

The ruling could affect several other cities that have similar laws, including San Francisco.

Another video shared this week on Twitter by BetterSoma shows the homeless population seems to be coming down with some sort of plague:

It’s probably wise for those who disagree to get out and vote Republican while you still can.

WHOA! This Is Why Kamala’s Husband Doesn’t Speak Much- This Explains EVERYTHING!
AFF

BREAKING: Protests ERUPT Across The U.S. Over THIS- It’s About To Get UGLY
AFF

Pennsylvania joins 10 other states in withdrawing from National School Boards...