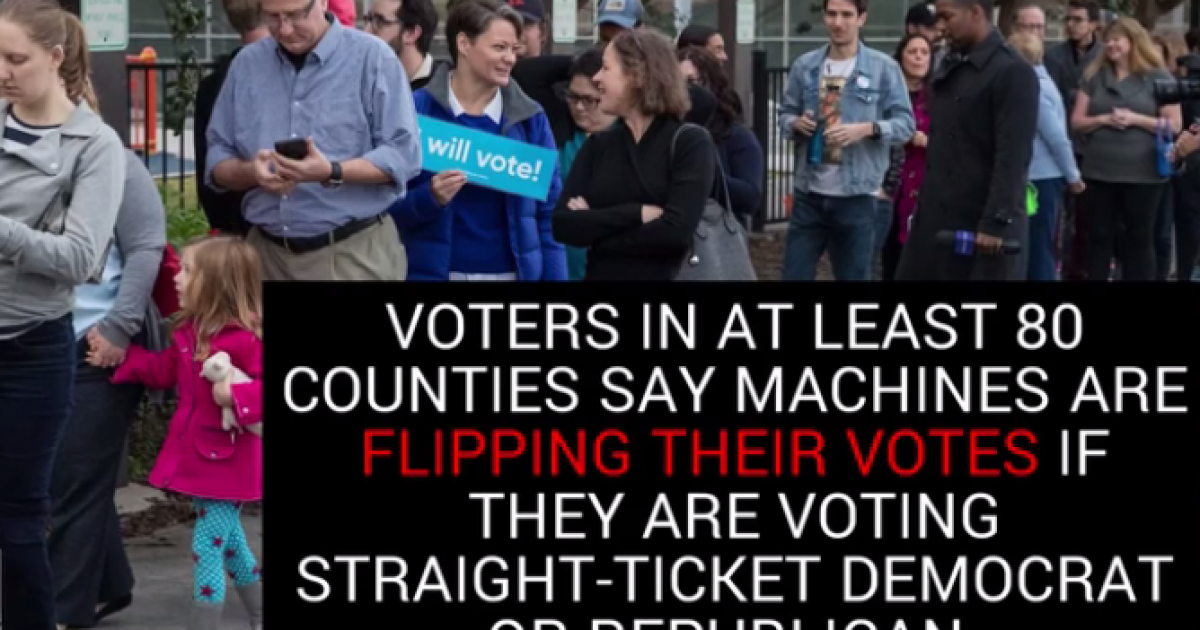 Well, this has been going on for some time and should not come as a surprise seeing that under testimony, we know that electronic voting can be manipulated and it can be done in such a way as so that no one knows it is even happening.  However, as early voters in Texas are discovering, some altering is taking place right before their eyes just like it did in 2016.

In Texas, the hotly watched contest between incumbent Ted Cruz and Democrat Beto O’Rourke is at the center of the voting.

Texans are claiming that their straight-ticket voting is being flipped to the other party in this key race and others.

This is occurring in at least 80 counties in Texas!

Some straight-ticket voters have reported that voting machines recorded them selecting the candidate of another party for U.S. Senate, exposing a potential problem with the integrity of the state’s high-profile contest between U.S. Sen. Ted Cruz and Congressman Beto O’Rourke and leading good government groups to sound the alarm.

Several Democratic voters, for example, have complained the voting system indicated they were about to cast a vote for Cruz, a Republican, instead of Democrat O’Rourke as they prepared to send it. Some said they were able to get help from staff at the polling place and change their votes back to what they intended before finalizing their ballots.

Most of the 15 to 20 people who have complained to the state so far said that their straight-ticket ballot left their vote for U.S. Senate blank, according to Sam Taylor, communications director for the Secretary of State. A spokesman for the Texas Civil Rights Project said the group has received about a half dozen complaints, mostly of Democratic straight ticket voters whose ballots erroneously included a vote for Cruz, and one Republican straight ticket voter whose ballot tabulated a vote for O’Rourke.

The problem occurs on the Hart eSlate voting machine when voters turn a selection dial and hit the “enter” button simultaneously, according to the state. Eighty-two of the 254 counties in Texas have these machines, although complaints have only come from Fort Bend, Harris, McLennan, Montgomery, Tarrant and Travis counties, according to Taylor.

In a report by ABC 13, several voters told their story about how their votes were flipped right before their eyes.

While Democrats and Republicans alike had their votes flipped, the state of Texas says, “Don’t worry, it’s user error.”

It’s popped up across Texas often enough for the Secretary of State to put up a statewide advisory on Monday to every Texas election advisor.

The Secretary of State calls it ‘operator error.’

“We’ve heard from voters over a number of elections about this,” said Ft. Bend County Election Administrator John Oldham.

He even told the Secretary of State about it years ago and it’s still happening.

“It’s not a glitch, it’s a user-induced problem that comes from the type of system that we have,” Oldham said. “I think both sides could be equally hurt.”

Sam Taylor, at the Texas Secretary of State’s office, tells 13 Investigates the problem is “user error” and not something their office could fix. Taylor suggests a vendor could or should handle any upgrades, but the state has not asked vendors to do so.”

That’s not all, Fox News adds this:

Taylor said his office “has no legal authority whatsoever to force any” voting machine vendors “to make upgrades if their voting systems are otherwise in compliance with federal state and law.” He said the Hart eSlate’s system was certified in 2009. He also said it was the county’s responsibility to purchase new voting equipment if needed.

“We will continue to educate Texas voters using existing resources,” Taylor said, “and urge all Texans casting a ballot to take their time, slow down, and carefully review their ballot before casting one.”

Really?  What about not using the faulty voting machines Mr. Taylor and go to written ballots, where only the voter is in control of that ballot?

It looks like this is the electronic version of the hanging chads of the 2000 election between George W. Bush and Al Gore, or could it be much more malicious?

Just to remind you, these voting machines have remote access control.

Just keep this in mind when you evaluate what is going on with electronic voting machines.