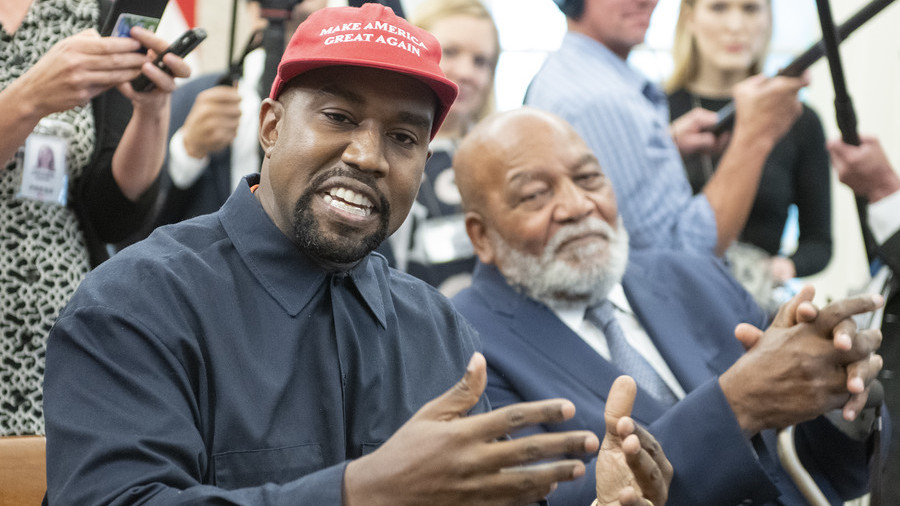 A movement, calling for ‘Blexit’ or exit of blacks from the Democratic party has been launched, and quickly got designer treatment by a prominent Donald Trump supporter – rapper Kanye West.

The branded merchandise was unveiled at the Turning Point USA’s Young Black Leadership Summit (TPUSA), a meeting of young black conservatives held in Washington on Saturday. The shirts feature the word ‘Blexit’ and ‘We free’ slogan’.

#BLEXIT – The BLACK EXIT from the Democratic Party.@RealCandaceO has been working on this for awhile and we’re launching it HERE at #YBLS2018

Retweet if you’re with us and think it’s time for Black Americans to leave the Democratic Party FOR GOOD! pic.twitter.com/jWQdmO9LKT

“Blexit is a renaissance and I am blessed to say that this logo, these colors, were created by my dear friend and fellow superhero Kanye West,” TPUSA’s Communications Director Candace Owens told Page Six.

At long last, https://t.co/nUoq5DBrzU is launched!!!

The official Black Exit from the Democrat Party.

Next year, the Blexit movement will hold rallies “in every major city in America that the Democrats have destroyed,” Owens announced. While West was not present at the event, he was there “in spirit,” according to her.

The first seven black Americans elected to Congress were ALL Republicans

Democrats try to erase the truth from our history books

Kanye West is making "Blexit" merch to encourage a black exit from the Democratic Party. What he actually seems to be encouraging is acceptance of the Republican Party's decades-long racist effort to silence black voices via mass incarceration, voter suppression & gerrymandering.

Apart from clothing, the Blexit.com website was launched, featuring stories of the black defectors from the Democratic Party. Owens herself has left the Democrats, urging other black Americans to follow suit and get rid of the “hamster mentality” that the party is somehow by default the only good one for black people.

My two favorite hats. #BLEXIT is about making America great by recognizing that we are ALL AMERICANS. We will no longer allow the media rhetoric and angry leftists to keep us apart.

The Blexit clothing surely goes well with the red MAGA hats, since Kanye West is a prominent supporter of US President Donald Trump. The two recently met in the White House, with the rapper giving one of the most fiery and slur-ridden speeches the US President’s office has ever seen.