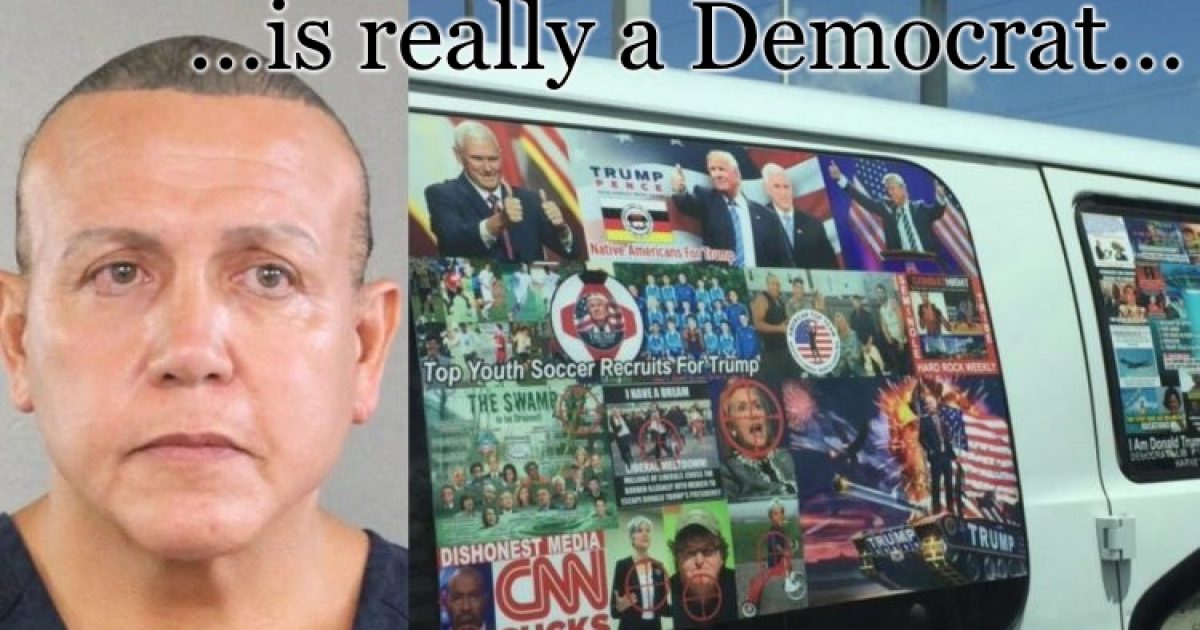 It was hardly a surprise to those on the right that the so-called “mail bomber” turned out to be an alleged Trump supporter. The timing for this couldn’t have been more perfect, or suspect, being two weeks away from an election. For most of the year, the nation was led to believe that voters would turn out in droves and vote Democrat in repudiation of Donald Trump. As the election draws closer it is becoming painfully obvious to them that this isn’t the case. Their agenda and ideology are being rejected outright. Their childish, deceptive tactics have backfired in many ways and the American people are seeing the Democratic party for what it is. An America hating criminal cabal willing to do anything to retain power. Hopefully, the American people will question the authenticity of this latest event as well.

The left has been working hard to portray their political opponents as right-wing extremists and terrorists for many years. They have a way of making excuses for their violent behavior claiming that it is justified in the face of right-wing bigotry. They claim that we are the fascists while continually projecting their own racist past onto the Republican party. In 2009, at the onset of the Obama Administration, Homeland Security Secretary Janet Napolitano released a report entitled “Rightwing Extremism: Current Economic and Political Climate Fueling Resurgence in Radicalization and Recruitment”  where nearly everyone of a right-leaning orientation was labeled as a potential extremist. Veterans returning home from the war and unable to find jobs in the dismal economy were listed as being vulnerable to recruitment into radicalized groups. Gun owners were listed as potential extremists for being worried about further gun restrictions and erosion of their rights. Protestant Christian groups, pro-life activists, anti-tax advocates, if you held onto the notions of limited government and individual liberty you were a potential extremist. Ironically, the report does mention that while these are “potential threats” there was no information to lead anyone to believe that there was any real planning or criminal activity going on. What was missing, however, was any reference to Islamic terrorism or violent left-wing groups.

A report from the Southern Poverty Law Center claims that “almost two thirds” of recent terrorist attacks in the United States have been committed by “right-wing groups.” Mind you, they consider the KKK to be right-wing even though it was founded by the Democrats. The report goes on to say that the remaining attacks were committed by Islamic terrorists or left wing radicals. Almost two-thirds is a pretty vague estimation that could mean just slightly over half, leaving the remaining attacks as being “almost half.” In any case, the Charlottesville incident was listed as one of these attacks and if you remember the organizer turned out to be an Obama supporter and a member of the Occupy Wall Street Movement. In other words, he was likely an agent provocateur deliberately working to portray the so-called “Alt-Right” as violent extremists.

While many may scoff at this as some kind of conspiracy theory, the truth is that there is a history of infiltration into right-wing groups with the intent of portraying them as radicals. The most recent event was in the 2016 “Oregon Standoff” at the wildlife refugee where armed patriots stood against an illegal takeover of land by the federal government. Local Fire Chief Chris Briels went on the record and claimed he had caught federal agents posing as militia members harassing locals and snooping around the town’s armory. He later resigned, as a result, saying he couldn’t be a part of a government he couldn’t trust or have faith in. It would be one thing to infiltrate a criminal organization with the intent of proving criminal activity but to deliberately give the impression that such activity is occurring is another thing altogether.

Conspiracy theorists believe that the FBI often times deliberately sets people up to commit acts of terror in order to justify their existence, so to say. In 2016 a schizophrenic man in Oklahoma City was given cash, a vehicle and a fake bomb by the FBI in a so-called sting to carry out a bombing at an Oklahoma City bank. The FBI claimed that the individual prescribed to an anti-government, right-wing ideology. The question in this scenario remains as to whether or not the individual could have carried this out of his own accord. According to his parents, he had no money, no job and no vehicle of his own.

According to a National Security Studies Policy Paper entitled “The FBI’s Secret War Against the Patriot Movement and How Infiltration Techniques Relate to Radicalization Influences” the FBI conducted an extensive infiltration program into many of America’s so-called “right-wing extremist movements” or militias. They established a fictitious veterans group called the Veterans Aryan Movement and spent two years, 1991-1993 infiltrating militia groups and gathering intelligence. Despite following alleged plots, hundreds upon hundreds of hours spent investigating these groups resulted in negligible results as far as actual prosecutions or even criminal activity goes. Funny, didn’t we see this in another report? As the name of the report suggests, one result of this infiltration was increased paranoia and a reinforcement of the belief that the U.S. Government was turning against the very values it was supposed to protect and stand for, namely the Constitution. There was even an instance, according to the report, where militia members would join in on the mind games and feint that they had plans to do something so they could flush out the infiltrators.

While our government is hard at work trying to portray the right wing ideology as extreme, they are doing the exact opposite when it comes to Islam. According to Judicial Watch, the FBI, in 2012, under the direction of the now infamous Robert Mueller, purged all FBI training materials of any references to Islamic terrorism or any material that may in any way, be offensive to Muslims. In all fairness, however, the report mentioned in the previous paragraph does expose the same type of infiltration programs being conducted against Muslims by the New York City Police Department without any justifiable evidence or any actionable results. Here’s an idea, let’s treat terrorists like terrorists and leave innocent people alone, no matter who they are or where they come from.

The left will certainly treat this mail bomber incident as all the evidence they need to prove that the right wing ideology is driven by violent tendencies and that conservatives are hate-filled bigots. CNN has been continually blaming Trump for this and even suggesting that he apologize for his “divisive rhetoric,” which they claim is the cause. Is it possible that the man was a right-wing Trump supporter? Sure it is, but we all know that the Democrats are desperate and terrified of losing the midterms. If they are capable of prosecuting a man on trumped up sexual assault charges and carrying out the Russian collusion charade for two years in an effort to discredit Trump, I think they are quite capable of pulling this off as well.

Don’t forget to check out my books available at Amazon:

Psychopolitics in America: A Nation Under Conquest.  Also available in Paperback.

Not on my Watch: Exposing the Marxist Agenda in Education