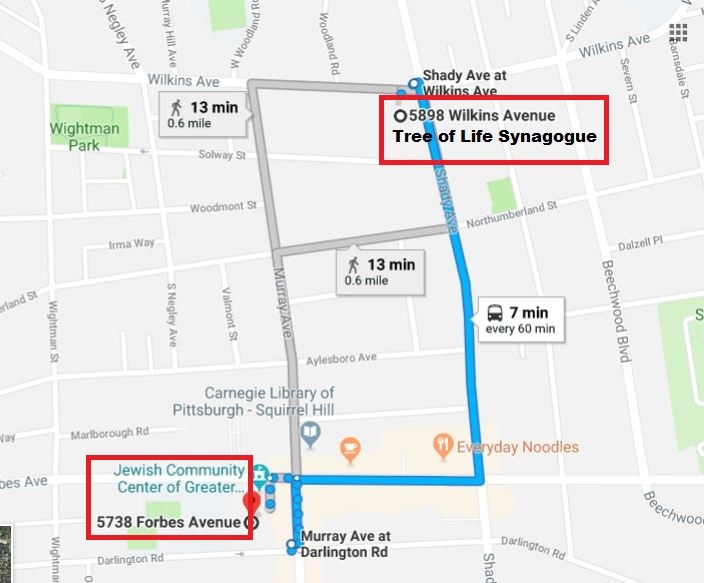 It is said that false-flag mass shootings share certain characteristics, one of which is that the shooting was preceded by an active shooter drill at the place of the subsequent mass shooting or a nearby place.

And so it is with the mass shooting at the Tree of Life Synagogue in the Squirrel Hill neighborhood — a Jewish enclave — of Pittsburgh, Pennsylvania. Eleven were shot dead, ranging in age from 54 to 97; the average age is 74.

We are told that yesterday, at around 10 a.m., armed with an assault rifle and three Glock handguns and screaming “All Jews must die!,” Robert Bowers, 46, burst into the Tree of Life Synagogue during Sabbath services, shooting and killing at least 11 people and wounding a half-dozen more, including four police officers, before surrendering.

A rabid anti-Semite, Bowers was treated for gunshot wounds, incurred in a shootout with police. He has been arrested, and faces 29 federal courts and state charges. He’s expected to appear before a federal magistrate on Monday afternoon. (New York Post)

Here is the report by Emily Balser for TribLive on an active shooter drill planned for the Jewish Community Center in Squirrel Hill, PA, on Thursday, January 25, 2018:

Pittsburgh and Allegheny County police along with the FBI will hold an active shooter drill Thursday night in Squirrel Hill.

The drill will take place from 8 p.m. to midnight at the Jewish Community Center, 5738 Forbes Ave.

Darlington Road will be closed from St. Edmund’s Way to Murray Avenue.

Residents may notice a large police presence in the area.

The exercise is closed to the public and the media.

The exercise is to ensure the area is prepared and ready to respond in an active shooter situation. The exercise will include apprehending a shooter, evacuations and treating victims at the scene.

At least 50 volunteers from the Squirrel Hill community and the Jewish Community Center staff will serve as role players for the exercise.

This Google map shows that the Tree of Life Synagogue is a 7-minute drive from the Jewish Community Center where the active shooter drill took place in January 2018.

The synagogue shooting is already used as a pretext to silence the Alternative Media, specifically Gab, a libertarian alternative to Twitter. Unlike Twitter, Gab does not censor speech, although Gab vehemently condemns acts of violence and terrorism.

Bowers has been active on social media, including Gab, where he calls himself @onedingo. His bio on Gab says “Jews are the children of satan. (john 8:44)”. (New York Post)

Upon learning of the Pittsburgh synagogue shooter’s identity, Gab immediately took down Bowers’ page, but not before backing it up and sending it to the FBI.

For letting Bowers speak freely on Gab, first PayPal banned Gab, followed by Gab‘s hosting provider, Joyent, saying it will discontinue hosting Gabon Monday morning because of an unspecified “breach of the Joyent Terms of Service”.

But Facebook and Twitter aren’t facing any backlash although Bowers had accounts on both. Likewise, package bomber Cesar Sayoc was allowed to spout threats on Twitter for two years. Twitter suspended Sayoc only after he was arrested two days ago, on Friday, Oct. 26. (RT)

In a tweet this morning, Gab says they’ve secured a new hosting provider.

This morning, Gab issued this statement on its website:

Gab.com is under attack. We have been systematically no-platformed by App Stores, multiple hosting providers, and several payment processors. We have been smeared by the mainstream media for defending free expression and individual liberty for all people and for working with law enforcement to ensure that justice is served for the horrible atrocity committed in Pittsburgh. Gab will continue to fight for the fundamental human right to speak freely.

As we transition to a new hosting provider Gab will be inaccessible for a period of time. We are working around the clock to get Gab.com back online. Thank you and remember to speak freely.