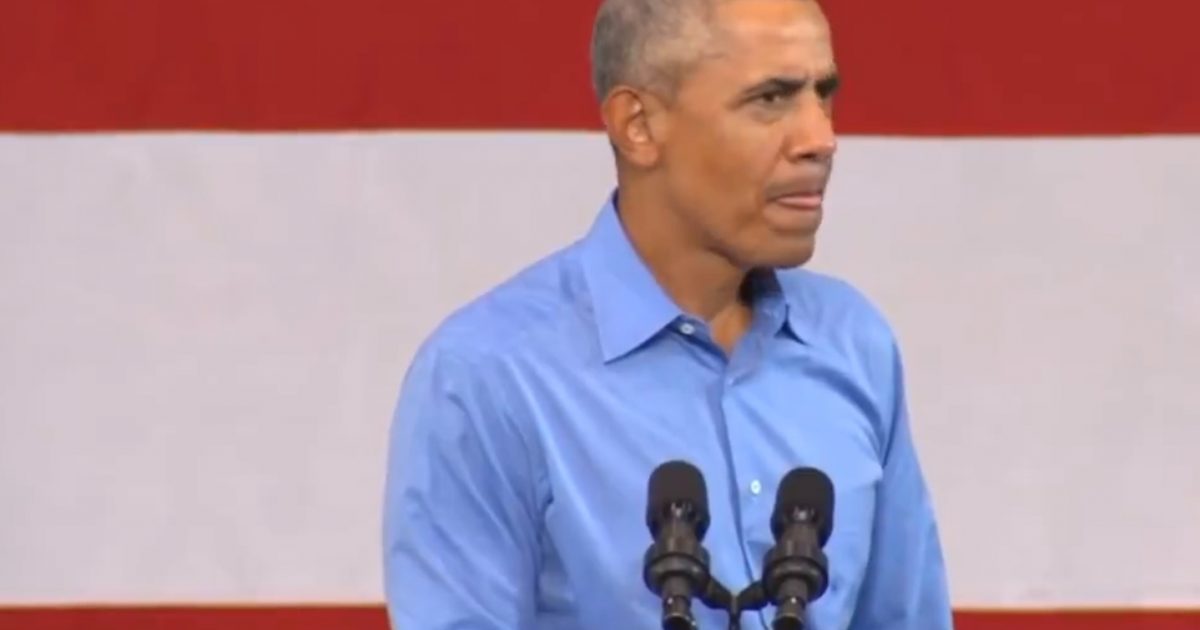 The usurper-in-chief Barack Hussein Obama Soetoro Sobarkah commented during a Democratic campaign event in Milwaukee about the number of indictments handed down to President Trump’s former advisers.  During his comments, Obama uttered, “Nobody in my administration got indicted.”

Why yes, yes, that probably is the issue.

“They promised to take on corruption. Remember that?” Obama asked the crowd at Milwaukee’s North Division High School Friday.

“They have gone to Washington and just plundered away,” he added.  “In Washington, they have racked up enough indictments to field a football team.  Nobody in my administration got indicted.”

Well, that’s not really true, not that many indictments, but there was a promise to deal with corruption.  As you can see, Obama, Hillary, Lynch and Holder remain at large, which should tell us something about the current administration dealing justly with corruption in DC.

Take a look at this hypocrite’s statements and note his smug look and attitude.

It's because his administration was so corrupt that they wouldn't turn over to the people's representative documents needed to investigate their crimes or witnesses pleaded the 5th. https://t.co/BgXBIyWgEz

Mr. Obama responded Friday, “I would like to think that everybody in America would think it’s wrong to spend all your time from a position of power vilifying people, questioning their patriotism, calling them enemies of the people and then suddenly pretending that you’re concerned about civility.”

“It shouldn’t be Democratic or Republican to say you don’t try to punish political opponents or threaten the freedom of the press just because you don’t like what they say,” he said.

This article is brought to you by the words “hypocrisy” and “shameless.”  That’s exactly what this guy is engaging in shameless hypocrisy.

Obama vilified people, spurred racial tensions like no other, questioned true patriots to the point of labeling them potential terrorists and acted as though he was concerned about being civil.

With all of that said, Obama’s Attorney General, Eric Holder, was the only attorney general in US history to ever be held in contempt of Congress because he would not provide them documents they requested in Operation Fast and Furious, an unlawful operation that smuggled guns across the US/Mexico border into the hands of drug cartels that resulted in the deaths of 2 federal agents, hundreds of Mexicans, including a beauty queen and a Mexican police chief, other deaths in the US and even in Paris, France, as well as and even in Paris, France..  Who aided and abetted Eric Holder in his crimes?  Why, none other than Mr. Obama himself by way of executive privilege, which was shot down by a federal judge.

On top of that, if the current administration was actually serious about performing the duty of the president under our Constitution, they would be ensuring the not only Holder, but Obama, Lynch, Hillary Clinton and a plethora of their lemmings would be prosecuted to the fullest extent of the law, but they aren’t interested in that because this makes for good political theater so that each person remains deceived in thinking that either party truly cares about upholding the Constitution.

For instance, the FBI has already investigated Hillary Clinton and though they didn’t recommend her for prosecution, it was clear that she broke the law.

Obama Health and Human Resources Secretary Kathleen Sebelius clearly broke federal law not once but at least twice and yet, nothing was done to her.  She just continued on, walking between the raindrops, as it were.

Let’s not forget the fiasco of the IRS targeting of conservatives, the attack on our veterans, Benghazi, Extortion 17, partnering with America’s sworn enemies, working with terrorists, and the list goes on.

So, yeah, while Obama may not have had the indictments, largely because he covered for the criminals in his administration, there is no doubt that his administration was arguably the most corrupt that America has ever seen.

All we need now is for President Donald Trump to make good on the promise he made the American people about dealing with the corruption that came from the Obama administration with justice.