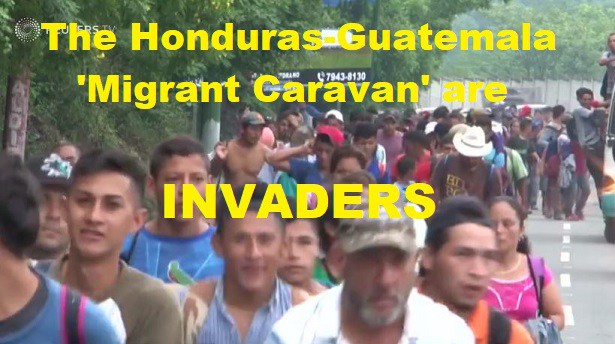 Last week, we learned that the Pentagon is sending 800 to 1,000 troops to America’s southern border, to deal with the thousands of so-called “migrants” in the so-called “caravans” that are traveling through Guatemala and Mexico, with the intent to crossing the border into the United States. Earlier this year, the military had already deployed about 2,000 National Guard troops to the border.

Monday, in a tweet, President Trump called the “caravans” an “invasion of our Country” and warned the “migrants” that “our Military is waiting for you”.

As reported by the Wall Street Journal, the mission of the 5,000 troops is “Operation Faithful Patriot” — a military force equal to about one-third the number of U.S. Customs and Border Patrol (CBP) agents currently working at the border, and a larger deployment than we have in Syria and Iraq, and about half of what we have in the field in Afghanistan.

Of the 5,000 troops, about 1,800 will go to Texas, 1,700 to Arizona, and 1,500 to California. The troops will be drawn from about 10 U.S. Army installations and consist largely of military police and engineers. U.S. Marines also will be deployed.

The three officials are:

Canadian Free Press posted a nearly 23-minute video of the press conference, with neither a transcript nor summary. To view it, go here.

Below is my transcripton of the press conference.

“An update on enhanced security operations in order to address potential for large groups of migrants who arrive at the US border as part of the so-called caravan. As of this afternoon, we continue to track a large group of some 3,500 traveling through southern Mexico with the stated intent of reaching the US border…. We’re also aware of a second large group of around 3,000 migrants at [a] border crossing between Guatemala and Mexico. This means that at any given moment, there are tens of thousands of migrants between the Guatemalan border and the US border that are moving towards us. Within that flow are included about 17,000 criminals last year, along with hardened smugglers and people from over a hundred countries from around the world.

Our immigration system is unable to effectively process and repatriate those without a right to remain in the United States due to an extensive backlog in our courts. What is new and challenging about this caravan phenomenon is the formation of multiple large groups that present unique security and safety threats…especially the second large group still in Guatemala has deployed violent and dangerous tactics against both Guatemalan and Mexican goverment security teams.

Yesterday we launched Operation Secure Line, a multiphase and flexible response designed to ensure we are prepared for any number of contingencies involved with the arrival of a large group of intending migrants at our border. Whether they attempt to cross at a port of entry or unlawfully in between ports of entry, an important principle here is that border security is a law enforcement mission, and as the unified border security agency of the United States, CBP is well equipped along with support from interagency federal, state and local partners to manage multiple contingencies of variious size. Since we initiated our planning two weeks ago, we have completed updated assessments of each of our 26 crossing points on the southwest border, and already deployed 100 specially-trained special-response team operators to prepare plans for each location…. We have at the ready 1,000 CBP officers, including 250 tactical enforcement officers and mobile response team professionals with training on managing contingenceis, including riot control. Between ports of entry, we have an additional 830 border patrol agents on standby ready to deploy, to include 140 special operations agents, 385 mobile response team agents, and an additional 350 agents from unaffected sectors. These agents will be augmented and supported by two dozen CBP air assets for surveillance and mobile response, including 4 blackhawks [helicopters], 6 additional helicopters, as well as multiple fixed wing assets and unmanned aerial systems [drones]. Due to the large size of the potential caravans that may arrive at the border, however, the Department of Homeland Security has further requested support from the Department of Defense. This is in addition to the 2,000 National Guard personnel already augmenting operations under Operation Guardian Support.”

“Our mission of homeland defense is inextricably linked to Homeland Security’s mission of homeland security.Operation Faithful Patriot, as we have named the military operation supporting CBP in hardening the southwest border, is the latest example of this critical partnership. In a macro sense, our concept of operations is to pool our military assets with a priority to build up southern Texas and then Arizona and then California, reinforce along priority points of entry so as to enhance CBP’s ability to harden and secure the border. The specific request for assistance is for the active duty military to enhance the capacity and capabilities of CBP by providing robust military capabilities.

First, the U.S. Army Corps of Engineers. They bring amazing expertise earned through years of experience under challenging conditions, including the current work of building the border wall.

We’re also bringing three highly experienced and capable combat engineering battalions with expertise in building temporary vehicle barriers, fencing, and are bringing them with heavy equipment which, as we speak now, is line hauling toward Texas.

We are bringing military planning teams that are already actively engaged with their CBP counterparts. This integrated command and control capabilities we are working with our aviation,  engineering, medical and logistic resources to bring them to bear.

We are bringing three medium web helicopter companies in. These are aircraft equipped with the latest technology. They are enhanced with optics; they have MVGs; they have sensors that allow them to operate at night, and be able to provide assistance to bring our CBP personnel exactly where they need to be regardless of the conditions. We will be able to spot and identify groups and rapidly deploy CBP personnel where they are needed. The helicopters will ensure that CBP agents can arrive in the more austere locations. They can fast-rope down if they need to; they can conduct and work their law enforcement activities. These aircraft will also ensure those agents needing medical assistance will be able to get that assistance when required.

In addition, we are bringing in military police units, we are bringing strategic airlift to bear. As we sit right now, we have three C-130s and a C-17 ready to deploy CBP personnel wherever they need to be at any time.

We have deployable medical units, we have the logistical support, we have command posts so we can combine with CBP command posts for our operational commanders who will work side by side to integrate our efforts and make no mistakes.

We’ve already brought critical material that’s already in place.We have enough concertina wire to cover up to 22 miles already deployed to the border. We have additional concertina wire that we can string, with over 150 miles available.

Additionally, we are working wherever reinforces are needed so that we can be exactly where CBP wants us to put it. By the end of this week, we will deploy over 5,200 soldiers to the southwest border. That is just the start of this operation. We’ll continue to adjust the numbers. Note that is in addition to the 2,092 that are already employed from the National Guard’s Operation Guardian Support that’s been so effective.

In my final point, I’d like to stress that everything I have discussed here fully adheres to our current authorities and governed by law and policy. We know border security is national security, and the U.S. military will advance CBP’s capability to harden the border. The Department of Defense is all ready and will continue to provide support to CBP to secure the border.”

The press conference concluded with Questions-and-Answers, beginning with a first question from a female reporter asking whether the troops deployed to the border will be armed (13:43 mark).

Gen. O’Shaughnessy answered that the 2,092 National Guards will remain, that the military’s Operation Faithful Patriot is to support and assist the CBP, and that “everything we’re doing is in line with and in adherence to Posse Comitatus” — the Posse Comitatus Act of 1878.

The reporter persisted and repeated the question of whether the troops will be armed. Gen. O’Shaughnessy said:

“We have the authority given to us by [Defense] Secretary [Jim] Mattis, units that are normally assigned weapons, they are, in fact, deploying with weapons.“

CBP Commissioner Kevin McAleenan emphasized that the the “caravans” are different from previous groups seeking to enter the U.S. illegally because of their violent tactics, as seen in their crashing of the Mexico-Guatemala border. That is the reason for the deployment of troops because “we want to be ready for that” “for the potential of the arrival of a large group like this”.

In response to a question whether this is a “national emergency,” Gen. O’Shaughnessy said: