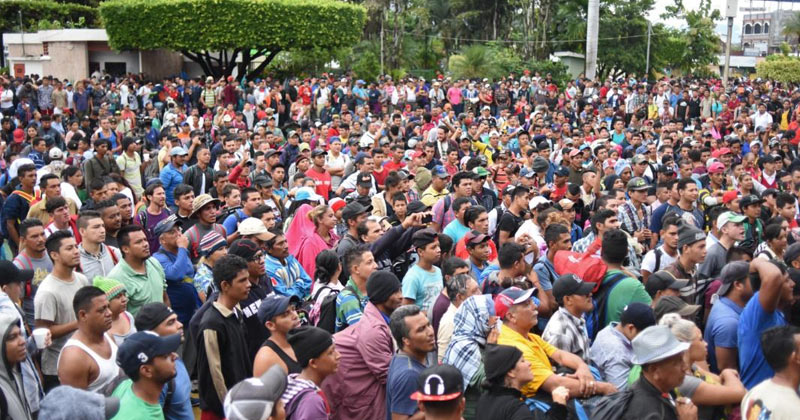 A second migrant caravan has been attempting to breach Mexico’s border with Guatemala, and the media is reporting that some migrants in that second caravan are armed with “guns” and “bombs”.  This is a very serious claim, and it needs to either be confirmed or retracted, because it is not helpful to have unconfirmed reports spreading like wildfire on social media.  There have been endless discussions about these migrant caravans on all the major news networks in recent weeks, and they are getting so much attention that they are almost overshadowing the midterm elections which are going to happen next week.  And if this latest report is true, concern about these caravans is certain to reach a fever pitch…

The second group back at the Guatemalan frontier has been more unruly than the first that crossed. Guatemala’s Interior Ministry said Guatemalan police officers were injured when the migrant group broke through border barriers on Guatemala’s side of the bridge.

Mexico authorities said migrants attacked its agents with rocks, glass bottles and fireworks when they broke through a gate on the Mexican end but were pushed back, and some allegedly carried guns and firebombs.

That quote comes from a Daily Mail article, and it sounds quite ominous.

But elsewhere in the article we find out that the “bombs” are actually “gasoline bombs made of soft-drink bottles, and improvised PVC tubes to launch fireworks”.  So they aren’t exactly military grade bombs, but they could definitely cause damage.

In response to these caravans headed toward our border, President Trump tweeted the following on Monday…

Many Gang Members and some very bad people are mixed into the Caravan heading to our Southern Border. Please go back, you will not be admitted into the United States unless you go through the legal process. This is an invasion of our Country and our Military is waiting for you!

And subsequently we learned that approximately 5,000 U.S. troops are going to be deployed to the border…

The US military will deploy 5,000 troops to the southern border – up from initial estimates of 800, according to the Wall street Journal, citing US officials. The troops will be sent to Texas, Arizona and California as Central American migrant caravan makes its way north through Mexico.

So it looks like we may have some sort of major border confrontation just before election day.

Needless to say, whatever happens at the border is going to be broadcast all over the world, and it could potentially swing a lot of votes one way or the other.

Meanwhile, the mainstream media is getting a lot of mileage out of this controversy, and some hosts are receiving a tremendous amount of criticism for the things that they are saying.  For example, Brian Kilmeade of Fox News is in hot water for stating that the migrants could potentially bring “diseases” into this country…

Fox News’ Brian Kilmeade is being taken to task over comments he made about the migrant caravan.

During his Fox and Friends show which was discussing the migrant caravan which is headed toward the United States, he explained how one of his biggest concerns about the group is the ‘diseases’ the migrants could bring.

And he went on to say that “keeping some people out is ‘part of the reason why America’s America.’”…

He then went on to ponder why those who want to block the caravan from entering are seen as ‘hardhearted,’ even though ‘we already give 40 to 50 percent of our taxable income to the government for social programs.’

‘We can’t have countries’ entire populations come in’ to America, Kilmeade continued, ‘because keeping some people out is ‘part of the reason why America’s America.’

On the other side, the New York Times is being criticized for linking criticism of the caravan with the attack that we just witnessed in Pittsburgh…

But as the country processes the cumulative trauma of two actual crises that occurred inside its borders — a spate of pipe bombs sent to the president’s political opponents, and the massacre of 11 people at a synagogue by a man who spewedanti-Semitic vitriol and called immigrants “invaders” — there is clear overlap between the hatred and delusion that drove this lethal behavior and the paranoia and misinformation surrounding the caravan.

As I have stated repeatedly, this is the most divided that I have ever seen America in my entire lifetime.  The midterm elections that will happen next week will certainly not solve that problem no matter who wins.  In fact, those elections could be a flashpoint that will escalate the anger and frustration in this country to an entirely new level.

We no longer have a single set of values that define us as a nation.  Instead, the left hates the right and the right hates the left and the mainstream media continues to invent new ways to divide us and pit us against one another.

I would never suggest that we should compromise our values, but if we do not learn how to love those that disagree with us we are not going to make it as a nation.

Anger and hatred are not going to get us anywhere.  Yes, we must always stand for what is right, but we must always endeavor to love our neighbors as well.

If America continues down the road that it is currently on, it is a recipe for chaos, civil unrest and societal collapse.

America may seem strong today, but a nation is only as strong as the people that make it up, and right now it is very difficult to be optimistic about our future.