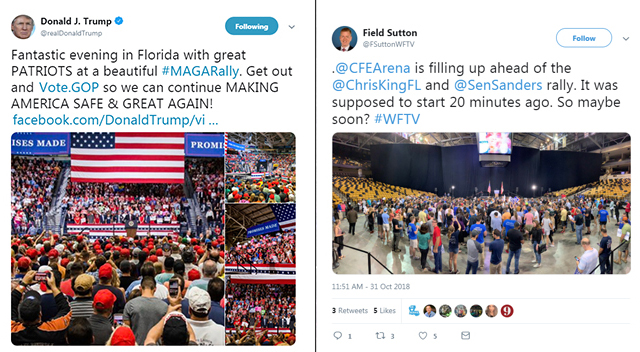 President Donald Trump’s rally on Wednesday night in Fort Myers for Ron DeSantis and Rick Scott packed the Hertz Arena to the brim whereas Bernie Sanders and Andrew Gillum struggled to fill half the floor of the CFE Arena during their competing rally held earlier in the day.

Time lapse of line waiting to get into Hertz Arena in Fort Myers, Florida, for the @realDonaldTrump rally tonight. Trump is expected at 7pm. pic.twitter.com/z3gKDhhtrI

Fantastic evening in Florida with great PATRIOTS at a beautiful #MAGARally. Get out and https://t.co/0pWiwCq4MH so we can continue MAKING AMERICA SAFE & GREAT AGAIN! https://t.co/c3fqrEdzFU pic.twitter.com/VrmaMHPhl3

If previous rallies were any indicator, thousands were likely turned away at the door.

On the other hand, Bernie Sanders and Andrew Gillum didn’t fill a single seat at their much smaller rally at the University of Central Florida:

It appears they put up giant black curtains to cut off at least half of the stadium, which can hold around 9,500-10,000, but since they only had 200-300 people show up they still couldn’t fill the place.

This picture from WFTV reporter Field Sutton was taken 20 minutes after the rally was supposed to start:

[email protected] is filling up ahead of the @ChrisKingFL and @SenSanders rally. It was supposed to start 20 minutes ago. So maybe soon? #WFTV pic.twitter.com/NQgN2YCp5C

“Floor is full. Seats are empty,” Sutton said in a follow-up tweet in response to someone laughing at the small crowd size. “I have no idea how many people that translates into.”

Floor is full. Seats are empty. I have no idea how many people that translates into. https://t.co/avNDTFcSJi

As The American Mirror reported last week, Sanders’ rally crowds are “down 90 percent” from 2016.

Despite the huge difference in turnout, Republicans should not become complacent. Democrats bus their voters to the polls and entice them with taco trucks to get out and vote.

Trump only won Florida by around 110,000 votes and Democrats have been working hard to get the least informed voters possible to the polls.

Watch President Trump’s full hilarious and entertaining Florida rally below and make sure to get out and vote no matter where you are: