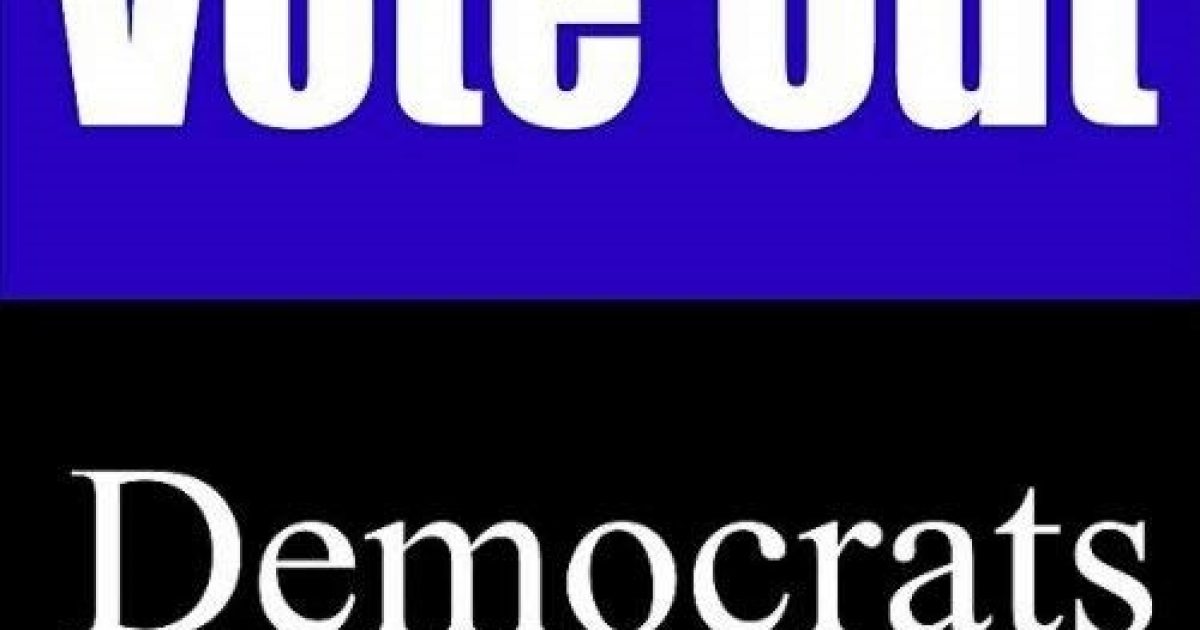 This is going to focus on why Democrats must be voted out. We usually kind of exhibit the facts and let people make up their minds, but Democrats have many ways to defeat that idea. For one, they are now mostly promoting the Socialist/Communist ideology. If you don’t believe that just look at the top of the Democratic Party.   Go ahead, look up the names like Dianne Feinstein, who takes money from Emily’s List and J Street, both close affiliates of George Soros, Communists and Socialists. Nancy Pelosi has more connections to Socialists than Bernie Sanders. Bernie Sanders is the President of the Democratic Socialist Party. Elijah Cummings is associated with the Communist Party, as is Keith Ellison. And don’t forget Elizabeth Warren, who is also closely associated with the Socialist Party.

Democrats do not care what you want.  They want power back so that they can continue to walk the United States towards becoming a Socialist nation. The proof is in what has been exposed recently by undercover videos where nearly every Democrat has stated they are not for gun control, but in reality, they want gun confiscation.

Democrats have learned their tactics from Saul Alinsky.

“RULE 10: “If you push a negative hard enough, it will push through and become a positive.” Violence from the other side can win the public to your side because the public sympathizes with the underdog. (Unions used this tactic. Peaceful [albeit loud] demonstrations during the heyday of unions in the early to mid-20th Century incurred management’s wrath, often in the form of violence that eventually brought public sympathy to their side.)”

Read this rule from Alinsky that the Democrats use to the max.  They use this daily in the media and in their ads. The Democrats use violence and blame the Republicans for it.

“RULE 12: Pick the target, freeze it, personalize it, and polarize it.” Cut off the support network and isolate the target from sympathy. Go after people and not institutions; people hurt faster than institutions. (This is cruel, but very effective. Direct, personalized criticism and ridicule works.)”

You can see this done on a daily basis from CNN, MSNBC, and many other media networks that come out against the President. Democrats were working on making the United States into a Socialist nation in 2016, but President Trump threw a wrench into their gears and he is still driving them mad because he speaks the truth. Democrats, on the other hand, do all they can to destroy everything and anything they show Trump in the negative (see Alinsky Rule # 11).

“RULE 11: “The price of a successful attack is a constructive alternative.” Never let the enemy score points because you’re caught without a solution to the problem. (Old saw: If you’re not part of the solution, you’re part of the problem. Activist organizations have an agenda, and their strategy is to hold a place at the table, to be given a forum to wield their power. So, they have to have a compromise solution.)”

Here’s the entire “Rules For Radicals” by Saul Alinsky.  Check and see that every rule presented is being used by the Democrats to smear the Republican Party and the President.

“Saul Alinsky was born to Russian-Jewish parents in Chicago on January 30, 1909, but was personally agnostic regarding religion. Author and political commentator David Horowitz writes that Alinsky “came of age in the 1930s as a Communist fellow-traveler (as his biographer Sanford Horwitt tells us in Let Them Call Me Rebel

).” Philosopher and podcaster Stefan Molyneux says that Alinsky, for his part, described himself as a “small-c communist,” meaning that he embraced the principles of communism but never formally joined the Communist Party. Chicago alderman Leon Despres, a Communist Party member and a college classmate of Alinsky, once said: “I don’t think he [Alinsky] ever remotely thought of joining the Communist Party, [but] emotionally he aligned very strongly with it.” And Alinsky biographer Sanford D. Horwitt wrote that Alinsky was “broadly sympathetic” with the politics of his friend Herb March, who worked as an organizer for the Young Communist League.”

We have shown the method the Democrats used to get what they want, one promoted by a Communist.

Now, check this out!

Norman Thomas, the six-time Socialist Party candidate for U.S. President, said the following in a 1944 speech:

That statement above shows how much the Democrats changed in 1944.  Today, Democrats are even worse, using people’s race and nationally to further their ideology of obtaining hate for their opponents. The Democrats are the very group that has destroyed more hopes and dreams than any other party in the system politics.

Take a look at just some of what Democrats today follow: ideas no reasonable man or woman would ever think about. They are NOT what they claim to be.  Project Veritas has exposed a number of the Democrats recently and over the years.

In a few days, we vote and if we allow Democrats to gain seats in the House or Senate, they will once again begin to work on tearing our nation apart. “WE THE PEOPLE” should never allow any party with backgrounds deeply entrenched and in bed with Socialists and Communists to hold any office and be trusted to uphold our Constitution.

Let us show you a small part of who the Democrats are today. Read this twice if you have to, but make sure you are ready to accept the truth as it is and vote them out.

“Late in 2010, Communist Party USA member C.J. Atkins called for his comrades to drop their “communist” label, so that they could work more effectively inside the Democratic Party. Soon thereafter, Joe Sims, co-editor of the CPUSA publication People’s World, acknowledged not only that collaboration with the Democrats “will be an area of engagement for those wanting to make a difference,” but also that communists might someday be able to “capture” the Democratic Party entirely. Sims warned, however, against dissolving the CPUSA entirely into the Democratic Party. Rather, he advised his organization to remain a separate entity, working both inside and outside the Democratic Party as circumstances required.

In January 2015, Communist Party USA National Committee chairman John Bachtell published an essay in People’s World stating that American communists were eager to work with the Democratic Party in order to advance their goals. For details, click here.

During Bush’s first term, Democratic Party politicians demanded that he enact Campaign Finance Reform, ostensibly to reduce the influence of wealthy contributors to political candidates. But the Democrats included in the legislation a tiny provision for so-called “527” organizations that would allow ultra-wealthy radicals such as their ally George Soros to contribute unlimited sums of money to the parties and candidates of their choice. The leaders of one of these “Shadow Party” organizations, MoveOn.org, jointly said of the Democratic Party following the 2004 election (in which Democrat John Kerry lost by three million votes to George W. Bush): “Now it’s our Party: we bought it, we own it….”

Look at the first line above, the Communist Party were told to drop the “Communist” label so they could merge into the Democratic Party. Under a Communist-Democratic Alliance, it clearly shows as late as 2015, that Democrats were embracing that ideology. Read it and click to the points to see what the Democratic Party really is. Also notice that George Soros is deeply connected to the Democratic Party, along with others who support very radical, Socialist-Communist ideas that do not conform to our Constitution or to freedom.

We have shown but a very, small part of what the Democrats really are and we do hope and pray that you not only pass this article on but also print it out and hand it to all of your friends and tell them to read it and pass it on. We have allowed the Socialists and Communists to get deep into the Democratic Party to the point that Democrats are not even close to what they were in 1856, when they supported slavery. If you wish to read about the real Democratic Party and just who they are today visit Discover The Networks.  Democrats are more interested in keeping power and they are not shy about that claiming that they will only be more “civil” if they win, which to many is an indication that if the Democrats lose this election, they will become even more obstructive, angry, and take more action against the people of our nation. That is not a veiled threat, they openly make that statement.

In closing,  it is up to us, “WE THE PEOPLE,” to get this right or that slippery slope many talk about will be upon us and the Democrats will act swiftly to destroy our rights, our Constitution, and our very lives.

If “WE THE PEOPLE” do not go out and vote for the only party that honors our forefathers, we all lose, jobs, money, faith, rights, guns, ideas, and so much more.  The Democrats know this and they hope “WE THE PEOPLE” forget this. Don’t forget, go out and Vote Red, bring everyone you can, and most of all, spread this article over the next few days before the election so “WE THE PEOPLE” win and not the Socialists/Communists, formerly known as Democrats!