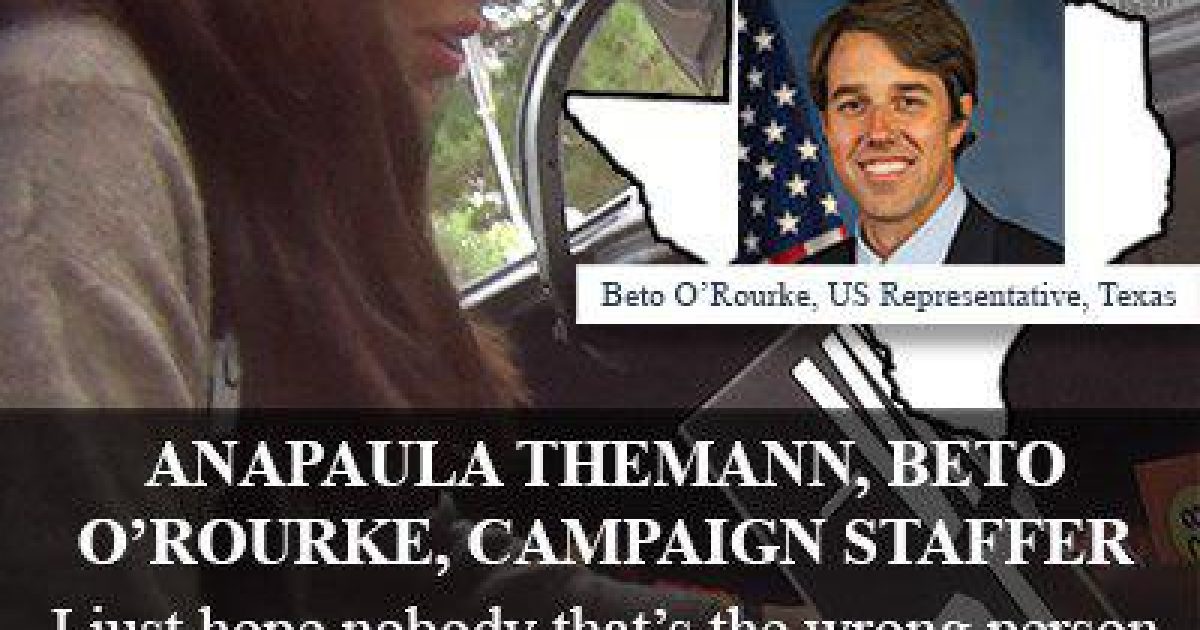 In yet another bust of criminal activity among Democrat campaigns, Project Veritas has exposed the illegal use of campaign funds by aides of congressman and  US Senate candidate Robert Francis “Beto” O’Rourke to help transport Honduran nationals in the caravan of migrants to the US to enter illegally through the southern border.

Dominic Chacon and AnaPaula Themann, staffers of the O’Rourke campaign, admitted to facilitating transportation to airports and bus stations.

In the video, the following conversation occurs.

Chacon: “The Hondurans, yeah… I’m going to go get some food right now, like just some stuff to drop off…”

Themann: “How did they get through?”

Chacon: “Well I think they accepted them as like asylum-seekers… So, I’m going to get some groceries and some blankets…”

Themann: “Don’t ever repeat this and stuff but like if we just say that we’re buying food for a campaign event, like the Halloween events…”

Chacon: “That’s not a horrible idea, but I didn’t hear anything. Umm, we can wait until tomorrow for that.”

Themann: “Well that’s exactly the food we need. And I will just mark it as, I do have dozens of block walkers.”

Themann: “There’s actually stores that just mark it as ‘food’ they don’t mark different types… at Albertsons, on the receipts, it marks it just based off of brand…”

Chacon: “I think we can use that with those [campaign pre-paid] cards to buy some food, all that s**t can be totally masked like, oh we just wanted a healthy breakfast!”

Among some of the other comments were:

Additionally, Chacon claimed that Jody Casey, the campaign manager for the O’Rourke campaign, was very happy to hear about how they were using campaign funds illegally to support the aliens seeking to enter the country illegally.

Chacon: “She texted us afterward and was like, I’m so happy that we have a staff that gets it and was there, I was so happy to see y’all there, still working, still contributing, we have the best team ever… she was good about it.”

Chacon: “Well, she doesn’t know we used the pre-paid card, but she doesn’t need to know.”

However, later it was confirmed she did know.

Reyes: “The thing is yeah, as long as we’re not advertising it. I mean yeah, I don’t really know. They said it was fine sooo *throws hands up* I mean I don’t know, okay. I told you about it! I have the text messages to prove it, sooo…”

Journalist: “So you told Jody?”

Reyes: “Yeah. I told Jody and I told my director.”

Chacon also said that they would do more.

“… we’re going to give rides to some of the immigrants too. Like to the airport, to the bus station, like why not, you know?”

When Ms. Casey was asked about the funds being used unlawfully, here’s the conversation that took place.

Journalist: “It just made me really concerned, like, you know, because I know that we’re using some of the campaign resources to help with the migrants and like, I just didn’t want anybody to get in trouble with that…”

Journalist: “Like I didn’t want them to ask me any questions about people using resources…”

And how did Casey respond when O’Keefe confronted her with the video evidence? “No comment.”

Just asked campaign manager @jodyforbeto Jody Casey about the tapes we’re about to launch on @BetoORourke appearing to show campaign funds used illegally for caravan purposes. The footage implicates Jody and her staff. She said “no comment” multiple times. Launch in an hour… pic.twitter.com/Oh1KvZa8yw

Every single person captured on these videos should not only be brought up on charges regarding the illegal use of campaign funds, but there should be a serious consideration of charges of treason in helping those hell-bent on breaking our immigration laws to invade our country.

If this guy hires staffers like this now, what kind will he hire should he become a US senator?