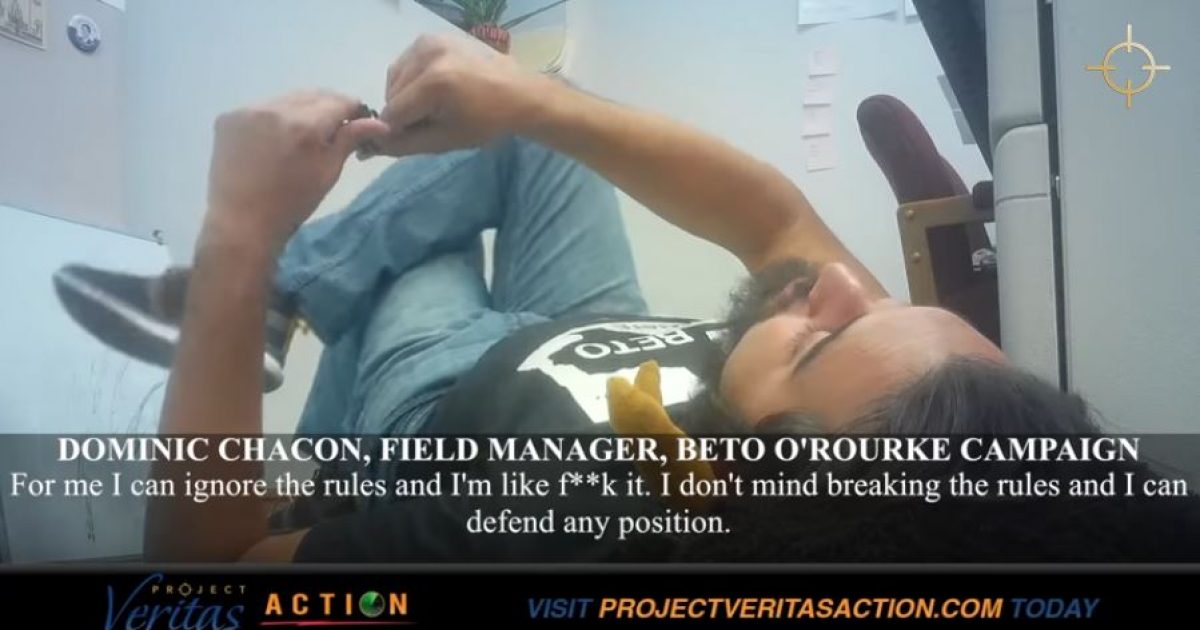 On Thursday, Project Veritas posted a damning video in which the campaign of far-left Democrat Robert ‘Beto’ O’Rourke appears to be illegally spending funds on supplies for the illegal migrant caravans winding their way to the United States.

According to Project Veritas:

Featured in this report are campaign staffers who work on Congressman O’Rourke’s US Senate campaign discussing how they use campaign resources to help Honduran aliens and transport them to airports and bus stations. Said Dominic Chacon and AnaPaula Themann, who work on O’Rourke’s campaign:

Chacon: “The Hondurans, yeah… I’m going to go get some food right now, like just some stuff to drop off…”

Themann: “How did they get through?”

Chacon: “Well I think they accepted them as like asylum-seekers… So, I’m going to get some groceries and some blankets…”

Themann: “Don’t ever repeat this and stuff but like if we just say that we’re buying food for a campaign event, like the Halloween events…”

Chacon: “That’s not a horrible idea, but I didn’t hear anything. Umm, we can wait until tomorrow for that.”

Themann: “Well that’s exactly the food we need. And I will just mark it as, I do have dozens of block walkers.”

A Project Veritas Action attorney reviewed the footage and assessed:

“The material Project Veritas Action Fund captured shows campaign workers covering up the true nature of spending of campaign funds and intentionally misreporting them. This violates the FEC’s rules against personal use and misreporting. It also violates Section 1001, making a false statement to the federal government. The FEC violations impose civil penalties, including fines of up to $10,000 or 200 percent of the funds involved. Violations of Section 1001 are criminal and include imprisonment of up to five years.”

“Nobody needs to know,” one staffer said. “Don’t ever repeat this,” another campaign staffer added.

O’Rourke is running for the U.S. Senate from Texas against Republican Ted Cruz.

Veritas says this is the eighth video in a series exposing illegal and unethical conduct by political campaigns.