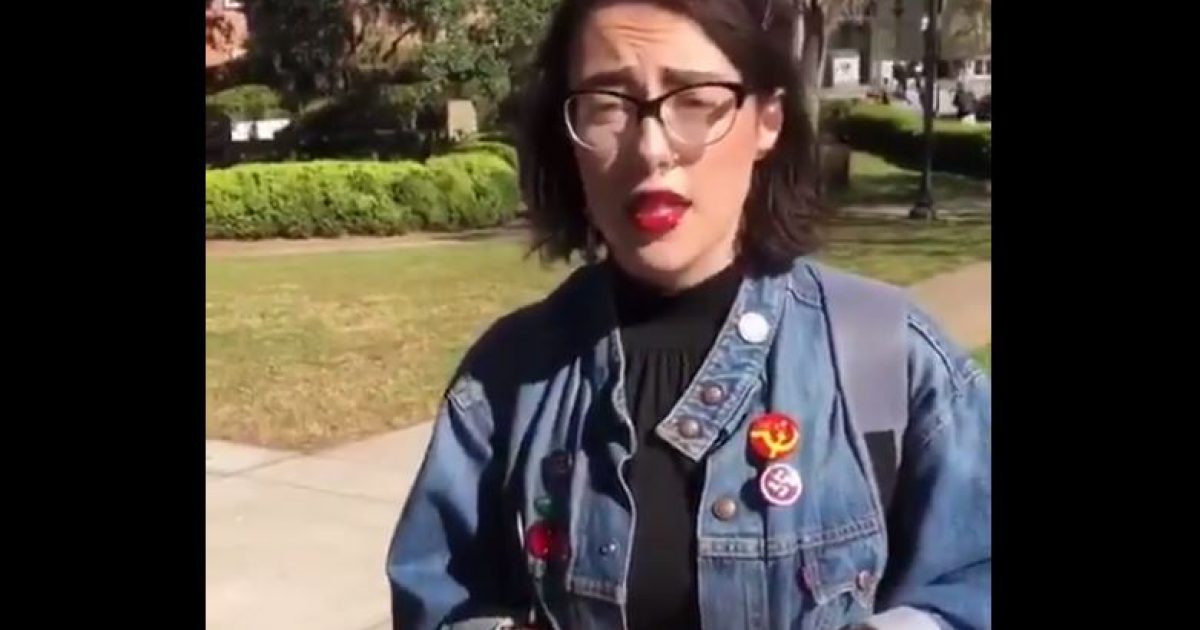 In a video posted to Twitter on Thursday, a young Communist female (who, by the way, proudly displays her hammer and sickle on her jacket) accosted a group of FSU Republicans in a profanity-laced rant, accused the conservatives of “normalizing and enabling Nazis” by supporting Rick Scott and Ron DeSantis and threw her drink on them in an apparent gesture of goodwill and community outreach.

Here’s the video, and be warned, there’s a lot of graphic language here.

WATCH: Angry leftist pours her beverage on FSU Republicans and says they are “normalizing and enabling Nazis” by supporting Rick Scott and Ron DeSantis. pic.twitter.com/1UDRxSZXE1

Naturally, this didn’t sit too well with many on Twitter:

LOOK AT WHAT WE ARE BREEDING IN AMERICA 🤪 "IDIOT"S"

Honestly, pressing charges for assault and letting her get a taste of the real world would be doing her a giant favor.

She also claimed that “Nazis” were killing “her people.”  This prompted one person to ask:

"Her people"? What is she talking about…? Am I missing something here…? Maybe I need to borrow her glasses

She has a hammer and sickle pin on her jacket. Does she have any idea how many people Mao and Stalin killed?

Probably not.  She is, after all, a college student…

1) I think her anger stems from those super-tight shorts. No one could stay calm with that amount of bound-up-ness.
2) I wonder what her mom thinks of that language.
3) The hammer & sickle pin negates her entire argument.
4) Extra point for the exit kick of the sign.

There are no facts or info to back them up hence she results to throwing beverage (assault) and aggressive behavior.

That is pretty much the liberal way, is it not?  When they’re not breaking the law or creating softcore pornography in a “get out the vote” stunt, they’re busy assaulting those with whom they disagree while calling them Nazis.

What’s truly scary is that this is the Democrat voter base, and this is the kind of ideology that will will be running our country if Democrats do manage to seize control of the House and Senate.

Which is why every singe Democrat running for office needs to be soundly defeated.

In the Midst of a Police Brutality Epidemic, Tone Deaf Dems...