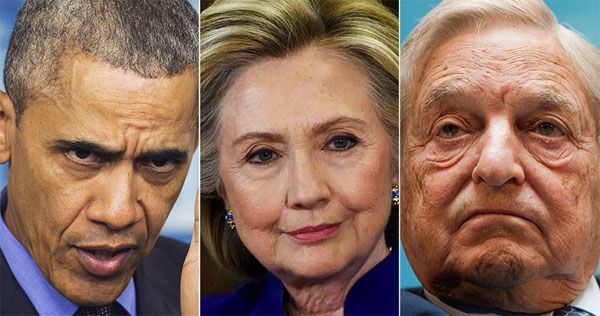 More documents are out exposing the fact that the Clinton State Department under Barack Hussein Obama Soetoro Sobarkah were using your tax dollars to fund the work of George Soros, and we have Judicial Watch to thank for it.

As the FBI and other departments in the executive branch have to continually be sued to obtain what they are lawfully supposed to provide, President Donald Trump has taken notice of them dragging their feet in response to Freedom of Information Act (FOIA) requests, particularly from Judicial Watch.

Trump tweeted, “Why isn’t the FBI giving Andrew McCabe text messages to Judicial Watch or appropriate governmental authorities. FBI said they won’t give up even one (I may have to get involved, DO NOT DESTROY). What are they hiding? McCabe wife took big campaign dollars from Hillary people…..”

Why isn’t the FBI giving Andrew McCabe text messages to Judicial Watch or appropriate governmental authorities. FBI said they won’t give up even one (I may have to get involved, DO NOT DESTROY). What are they hiding? McCabe wife took big campaign dollars from Hillary people…..

The State Department has been all too happy to collude with leftwing billionaire George Soros, using your tax dollars to fund his zealotry. Of course the department would rather you not know about it, but we’re keeping our foot in the door.

We just released 49 pages of new State Department documents showing top Soros representatives in Romania collaborating with the State Department in a program jointly funded by, among others, Soros’s Open Society Foundations – Romania and USAID, called the “Open Government Partnership.”

On September 16, 2016, the State Department’s Bureau of Educational and Cultural Affairs Senior Program Designer Jennryn Wetzler sent an email announcing that the featured speaker in a State Department-sponsored “Open Government Partnership” conference call would be longtime Soros foundations official in Romania, Ovidiu Voicu. Voicu is the Executive Director of a Romanian non-government organization (NGO) called the Center for Public Innovation, which describes itself as a “spin-off” of Soros’ Open Society Foundation Romania.

Please join us for a conversation with Ovidiu Voicu, Executive Director of Romania’s Center for Public Innovation. Ovidiu will share updates from Romania, including recent OGP commitments to OER and open data & transparency in education! We encourage everyone to share thoughts and questions, as well as their own country updates.

Speaker Bio: Ovidiu Voicu leads the Center Public Innovation, a spin-off of the Open Society Foundation Romania. He joined the Foundation in 2000 to coordinate its social research programs, and in April 2012, he. took the leadership of the newly created public policy unit. In 2015, with the Foundation phasing-out its activities in Romania, Ovidiu and his team created the Center for Public Innovation, to continue the open society legacy and work on the ground.

On October 13, 2016, State Department official Richard Silver circulated summaries of Romanian news stories. In an analytical comment concerning a summary of a newspaper article discussing a proposal by Romanian politicians to ban George Soros-backed NGO members from holding public office, he defended Soros’ Open Society Foundation’s involvement in Romania.  Ironically, in doing so, he confirmed the Soros operations outsized influence in Romania and other countries:

Since 1990, the Soros ‘s Foundation for Open Society was one of the main donors in Romania and other former communist countries, financing sociological research, education, social inclusion, good governance, civic culture and integrated community intervention. The most influential Romanian NGOs as well as politicians, researchers and other players who had scholarships abroad benefitted by its financing. Over the past 26 years, a series of political parties, mainly PSD and its political allies, have blamed NGOs, intellectuals, cultural personalities of eroding Romania’s economy, territorial autonomy, public order or the health of the population. Independent analysts warned about the danger of such messaging which creates social shifts and turns Romania back to communist practices.

Also on October 13, 2016, Silver circulated the same news summaries, but the analysis contained additional material that was redacted as classified.

These government documents detail a close working relationship between the State Department and the Soros foundations’ operations in Romania and Europe. The State Department shouldn’t be using tax dollars to either fund or advocate for Mr. Soros’s far-left agenda. George Soros needs zero financial assistance from taxpayers.

Judicial Watch has uncovered how the Obama administration used your tax dollars to fund Soros organizations in Albania, and has also sued the State Department and USAID for funding and political activities of his Open Society Foundation.

The government watchdog group is also attempting to get their hands on information about Soros’ activities that are tied to the State Department in Macedonia and Colombia.  Guatemala has also been targeted by Soros’ Open Society Foundation, which is interesting given this week’s caravan attack on the border gate there.