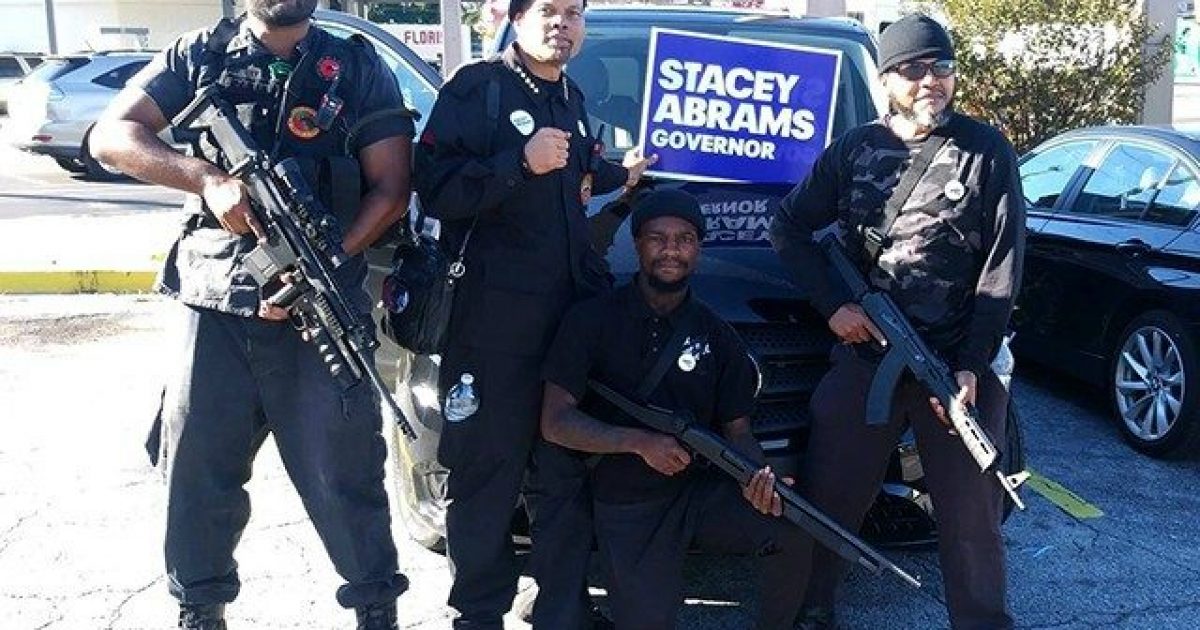 Images of Armed New Black Panthers with Stacey Abrams signs appeared on the Black Panther Facebook page, according to Breitbart. They claimed to be an “armed rally against voter suppression.” On top of that, the Georgia Secretary of State’s office filed an investigation against Democrats, citing an attempted hack.

“And relax, before you make any assumptions we are not working for & we did not plan this event with either campaign, and we have members with different political views both here in Atlanta as well as nationwide and even right here in this post. We did this on our own accord in response to the voter registration issue we’re still dealing with here in Georgia in 2018 (53 thousand registered voters voices won’t be heard this election).”

The biggest problem with that statement is the Stacey Abrams sign that appears in all of their pictures. Hmmmm. “Not working for either side.” Right.

“It’s no surprise that militant Black Panthers are armed and patrolling the streets of Georgia for Stacey Abrams. The Black Panthers are a radical hate group with a racist and anti-semitic agenda. They are dangerous and encourage violence against our men and women in uniform. Stacey Abrams should immediately denounce the Black Panthers and their hateful record of racism. She should stand against and condemn their attempts to intimidate hardworking Georgia voters just days before the election.” Ryan Mahoney,  Kemp for Governor spokesman

Abrams recently came under fire for saying that undocumented immigrants  would vote in the “blue wave.” She claimed it was a slip of the tongue.

Stacey Abrams opponent Brian Kemp has opened an investigation against Democrats for alleged “cyber crimes” stemming from an attempted hack on state voting infrastructure, according to Fox News. Brian Kemp is the Secretary of State in Georgia and is running against Abrams for the governor’s position.

“After a failed attempt to hack the state’s voter registration system, the Secretary of State’s office opened an investigation into the Democratic Party of Georgia on the evening of Saturday, November 3, 2018. Federal partners, including the Department of Homeland Security and Federal Bureau of Investigation, were immediately alerted.

“While we cannot comment on the specifics of an ongoing investigation, I can confirm that the Democratic Party of Georgia is under investigation for possible cyber crimes,” said Candice Broce, Press Secretary. “We can also confirm that no personal data was breached and our system remains secure.” Press Release, Georgia Secretary of State Office