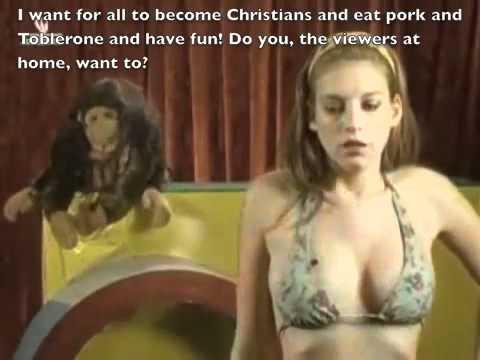 Originally published on July 30, 2017 at Fellowship of the Minds

“Whoever hates me also hates my Father.”

Toffee and the Gorilla is an Israeli TV show with a bikini-clad young woman named Dawn Rosenzweig as Toffee, and Shuki the monkey-muppet as Gorilla.

This is the description of the show on the Toffee and the Gorilla Facebook page:

It’s a parody of some of the shows on Israeli state Educational TV, especially in the ’60s and ’70s (some of the sketches are even in black and white, for added effect). The messages are unashamedly racist (against Arabs, Mizrahim, Christians, etc.), chauvinist and violent, holding up a mirror to Israeli society as it were (albeit from a safe distance – placing such attitudes somewhere in the past). The show’s creator describes its political orientation as ‘socialist-pacifist’.

Note: Mizrahim are Mizrahi Jews, also called Oriental or Sephardic Jews. Unlike Ashkenazi Jews — who make up 90% of Jews in the world and are descended from European Jews who, in turn, descended from Turkic Khazars in the Caucasus who had converted to Judaism in the 8th century — Mizrahi/Sephardic Jews descended from local Jewish communities of the Middle East from biblical times into the modern era. In other words, unlike the Ashkenazi fake Jews, Mizrahi Jews may actually be biological descendants of the ancient Hebrews.

In an episode, which was uploaded to Toffee and the Gorilla‘s Facebook page on March 24, 2016, but to YouTube on April 23, 2012, Rosenzweig/Toffee mocks Jesus Christ’s crucifixion by nailing Gorilla to a cross. Note that the Hebrew-to-English translation appears to have been provided by the TV show.

Here are the video’s English subtitles:

Toffee: “Shalom. You’ve made it to the history program of Toffee and the Gorilla. I came to talk about the highlights of the history of the Jewish people, from times past until today. Today, we will learn about the crucifixion of Yeshu [Jesus]. Have you heard about Yeshu?”

Gorilla: “I want to assimilate.”

Toffee: “Do you even know what it is to be assimilated? It means to get fucked up with a goyah: this is something neither I or you, obviously, want.”

Gorilla: “I want my children to eat Toblerone [chocolate] and become goyim. I am bored here, Toffee! I want to live in Switzerland with a goyah and eat Toblerone all day long!”

Toffee: “Okay, darling. If you love Yeshu so much, you will have to play Yeshu.”

Toffee says, facing the camera: “I am Judas Iscariot.”

Gorilla: “I want for all to become Christians and eat pork and Toblerone and have fun! Do you, the viewers at home, want to?”

Toffee: “Because of this, I will crucify you! How dare you preach to the innocent Jews?”

Toffee then nails Gorilla’s left hand to a cross.

Gorilla screams: “My God, why have you forsaken me?”

Gorilla screams, while writhing: “Toffee! No, Toffee! I am scared! I walked on the water, I transformed crickets into cake! No, I am not Yeshu! This is a mistake! I am Moses, our teacher. Do not thrust with nails. Toffee, no!”

Toffee: “It’s only one nail, you coward.”

Gorilla screams: “Nooooo! Oh Toffee! Oh God, no! Aaahhhh! Aaaahhh! Ay ah! No, no, no!” — as Toffee strikes Gorilla’s body with the hammer.

We aren’t making this up; this is Israeli television being widely viewed today. The show is called, ‘The History Program of Toffee the Gorilla’. Anyone who advocates for this should not write a comment, instead they should consider ripping their heart out and sticking it in a jar; (it would have equal purpose and someday doctors could study it and perhaps determine what the hell is wrong with you)….

Welcome to Israel, where American tax dollars support this kind of scummy broadcast.