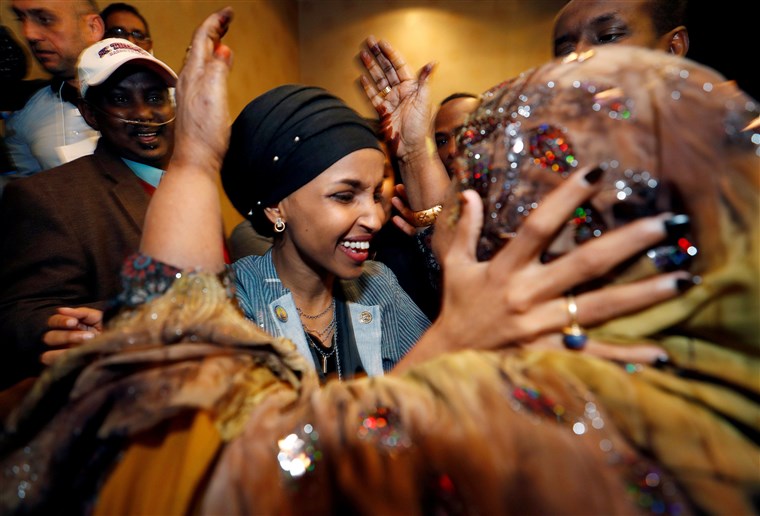 So, how did Muslims do in US elections?  There was winning and losing, but Americans need to understand that their ideology is driven by a totalitarian 5th century, demonic political/religious ideology that is anti-American and anti-Christian.  With that said, here are a few results around the country from some Muslims candidates seeking to rule over you, not represent you.

Democratic U.S. Rep. Keith Ellison will be Minnesota’s next attorney general, defeating Republican Doug Wardlow after a bitter campaign marked by allegations of domestic abuse and an intense spotlight on both candidates’ pasts.

Ellison helped deliver the DFL Party a sweep of the statewide elected offices and was met by a raucous room of supporters chanting his name at the party’s election night celebration in St. Paul. Ellison acknowledged the difficulty of the race but said his campaign persevered thanks to his supporters.

“Every single day I will wake up and I will fight to protect the rights of all of us,” Ellison said.

Ellison said “we are all in this together” and that “we are not going to cast anybody away.” “Immigration is a good thing,” he shouted, “having a good-paying union job is a good thing.”

This man has been backed by Communists, Muslims, violent Antifa activists and the most corrupt people in politics and was facing documented accusations of abuse of women to the point that not even the Minneapolis police would endorse him, but warned people not to vote for him due to his support of a cop killer.  Yet, he won by a large margin.  Voter fraud, anyone?

On the losing end of the stick is Aisha Yaqoob, who lost to Bonnie Rich for Georgia House of Representatives, District 97.  Deplorable Kel wrote on Yaqoob’s background.

Aisha is the daughter of Pakistani immigrants.

On March 24th 2016, the University of Georgia’s Amnesty International Group hosted an event called ‘Fight Night.’ Linda Sarsour was a speaker at this event. Aisha attended the event and was interviewed afterward. Aisha said, “I was blown away by the event. It was so great that Amnesty International was able to get Linda Sarsour to attend this event. It speaks volumes that a non-Muslim organization invited Linda to come speak because of how important it is for different groups to come together and fight for each other. The most powerful part of the event for me was hearing the stories from Linda and Raquel about different communities coming together and fighting for a shared cause, and sometimes not even a shared cause. The event only reinforced the need for collaboration and coalition building among different minority groups and reminded me that it is imperative for us to fight for others, instead of just our own communities.”

In 2017, Aisha appeared in an anti-Trump documentary called “The UnAmerican Struggle.” The description of the Documentary reads, “Bigotry is on the rise again in America, fueled by a President whose views are rooted in racism, misogyny, sexism, and xenophobia. His words and actions as a candidate, and now his policies as President, have breathed new life into an agenda of intolerance across the nation. This renewed struggle facing immigrants, Latinos, Muslims, black people, women, and transgender people is represented by frontline activist voices from the Southern Poverty Law Center, the National Diversity Council, the Council on American-Islamic Relations (CAIR) and Black Lives Matter.”

Aisha was endorsed by Hillary Clinton and Eric Holder.

In Michigan, Abdullah Hammoud was re-elected to the Minnesota House of Representatives, District 15.  Hammond, who is tied to Linda Sarsour, and met with both Hillary Clinton and Huma Abedin to discuss domestic and foreign policy was, like Keith Ellison, sworn in on the Koran.

This little Muslim help craft and pass a Ramadan bill in Michigan.

A resolution to extend best wishes to Muslims in Michigan, the United States, and worldwide, for a joyous and meaningful observance of Ramadan, a holy month of prayer, fasting, charity, and reflection.

Whereas, This occasion is observed in commitment to the Islamic principles and in remembrance of the month in which the holy Quran was revealed to Prophet Muhammad (pbuh); and

Whereas, Muslims in Michigan, our nation, and around the world will observe Ramadan by fasting, emphasizing self-discipline, worship, charity, and reading the Holy Quran to improve patience, humility, and spirituality; and

Whereas, Muslims in Michigan will put their faith into action by organizing the Ramadan Fight Against Hunger to collect and distribute over 60 tons of food to the state’s hungry and disadvantaged; and

Whereas, During Ramadan, Muslims spend this period in reflection and prayer while strengthening the bonds of family, friendship, and community. May is considered the most sacred month of the Islamic calendar; and

Whereas, The Muslim population has been growing in the United States and today’s Muslim American population is a tapestry of ethnic, racial, linguistic, social, and economic groups; and

Whereas, One of the largest populations of Muslims in the United States resides in southeast Michigan and makes meaningful contributions to our state; now, therefore, be it

Resolved by House of Representatives, That the members of this legislative body extend best wishes to Muslims in Michigan, the United States, and worldwide, for a joyous and meaningful observance of Ramadan, a holy month of prayer, fasting, charity, and reflection.

Sound un-American to you?  Yep, that’s because it is.

In Minnesota, Hodan Hassan defeated her Republican opponent, Bruce Lundeen, to win a seat in the Minnesota House of Representatives in District 62A.

As Deplorable Kel has noted, “Hassan is a Muslim woman who was born in Somalia. Hassan came to the U.S. as a refugee.  Hassan is against the travel ban and calls President Trump a racist.”

Interestingly her numbers were way over the top in the voting.  Take a look.

Does that not look like voter fraud to you?  Sure does to me.

We also have New York electing a Muslim judge.  As Deplorable Kel noted, ” Shahabuddeen Ally has been elected Judge of the New York City Civil Court. Ally will be the first muslim male Judge in New York.”

Clearly, this guy is not an American-minded individual.  He is aligned with the doctrines of the demonically-possessed non-prophet, Muhammad.

Will he be adhering to American law or Sharia?  I’ll let you be the judge of that (no pun intended).  I’m sure of one thing though, we will begin to hear stories about his rulings coming out of New York once he is actually in the position.

Ilhan Omar also won her district, which is not hard to imagine since it is largely a Muslim population.  What is interesting is that Muslims would elect a woman to office, especially a woman who married her own brother.

Omar also voted against legislation that would forbid insurance companies from paying money to terrorists who were killed while in the act of Islamic jihad and was found violating both House and State laws.

So, you guys are getting what you are voting for there.

These are just a few of the Muslims who ran this election cycle.  Next time there will be more and then more.

Since September 11,2001, the Muslims have not been attacked.  The American people have been attacked.  Muslims have created fake “hate crimes” and been caught over and over and over in their lies with virtually no punishment.  They have engaged in thousands of terrorist plots around the globe since 9/11 and they have even engaged in the on American soil.  Yet, America seems to tolerate them to the point of electing them to represent them.

What sort of mental malfunction are Americans operating under these days?

When are you going to have enough of this, America?