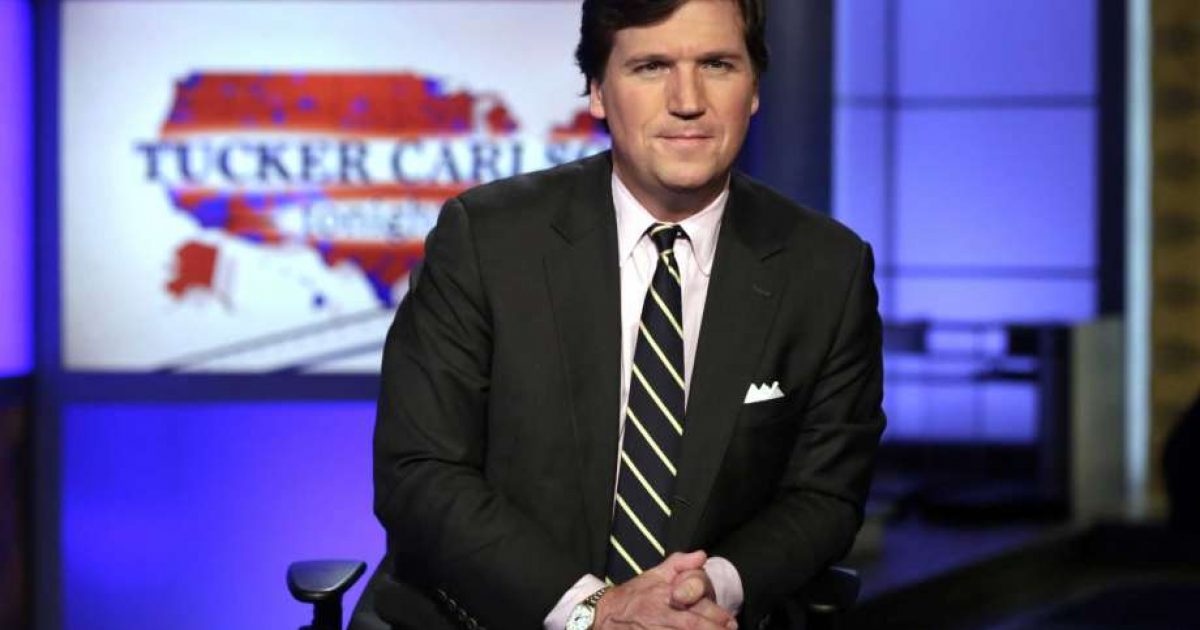 Fox News host Tucker Carlson’s home was descended upon by violent fascist criminals known as ANTIFA.  According to Carlson, the group was violently attacking his home while his wife and children were there and he was at work.  They attacked the front door so hard that they cracked it.  Understandably he and his family are upset, but they need to regroup, get armed and be proficient in the use of those arms, including teaching his kids, and make it know they won’t put up with that and be ready to deal with these criminals who trespass on his property and threaten the lives of his family.  Yes, I said it because that’s what we all believe should be done.

“I called my wife,” Carlson told The Washington Post in a phone interview. “She had been in the kitchen alone getting ready to go to dinner and she heard pounding on the front door and screaming. … Someone started throwing himself against the front door and actually cracked the front door.”

His wife, thinking it was a home invasion, locked herself in the pantry and called 911, Carlson said. The couple have four children, but none were home at the time.

But it wasn’t a home invasion. It was a protest.

According to now-deleted social media posts shared by Smash Racism D.C., a local anti-fascist organization whose members have been tied to other demonstrations against prominent Republican figures, activists showed up outside Carlson’s home Wednesday and they had a message for him.

“Tucker Carlson, we are outside your home,” one person could be heard saying in the since-deleted video. The person, using a bullhorn, accused Carlson of “promoting hate” and “an ideology that has led to thousands of people dying.”

This wasn’t really a protest either.  It was criminal in that these people were trespassing on his property and issuing veiled threats.  Listen.

I’m sure there were noise ordinances there were violating as they hid like the cowards they are under the cover of darkness.

“The incident that took place at Tucker’s home last night was reprehensible. The violent threats and intimidation tactics toward him and his family are completely unacceptable. We as a nation have become far too intolerant of different points of view. Recent events across our country clearly highlight the need for a more civil, respectful, and inclusive national conversation. Those of us in the media and in politics bear a special obligation to all Americans, to find common ground.”

That’s all fine and dandy but it won’t stop these fascist provocateurs from damaging more property and threatening more people.

Neither Tucker Carlson nor his wife or children were doing anything to these people.  While we have a right to free speech and freedom of assembly and to air out our grievances against government, no one has the right to be going on private property uninvited in the middle of the night to bullhorn private citizens.  Nobody.

They certainly don’t have the right to issue veiled threats about “knowing where you sleep at night” and then attempting to break in the house. Those are criminal actions.

The Second Amendment applies here too people.  My advice to Tucker Carlson is the same instructions I’ve given my wife regarding something of this nature:  If people show up, and start being loud in the yard, put them on notice that the police are being called and I have all the older children at home and my wife armed.  If those people fail to leave when you tell them to, they are clearly trespassing.  Video should be captured, by the way to identify the criminals.

Finally, if something like what took place at Carlson’s home happened at my home where people are a mob attempting to break down the door, I have told my wife, shoot through the door till it stops, then shoot some more.  That will send a strong message to these people that you are not to be messed with.

Tucker Carlson and his family should not have been terrorized like this any more than any other family in America, but again, there is only one way to deal with bullies.  Someone has to stand up to their violence with violence.

Just look at what happens to these Antifa pantywaists when people actually stand up to them.  They seem to like to dish it out, but don’t seem too able to take it themselves.

Now, we actually have ANTIFA members dressed with Communist masks, calling for a “Red Army” that are fully armed.  America, wake up!  It’s time to stop talking like diplomacy works with these people.  It doesn’t.

You may not like the sound of that, but our forefathers bore with a lot until the violence came to their front door and when it did, they didn’t hesitate in dishing it back out.

I’m not advocating for going and hunting people done and doing them harm.  I want to be clear on that.  I wish people would leave everyone alone just like I wish government would and let us all live in peace, but that isn’t going to happen.  It’s going to get worse.    I am advocating for self defense and the preservation of your life, liberty, property and family.  If that sounds foreign to you, perhaps you are foreign to America.