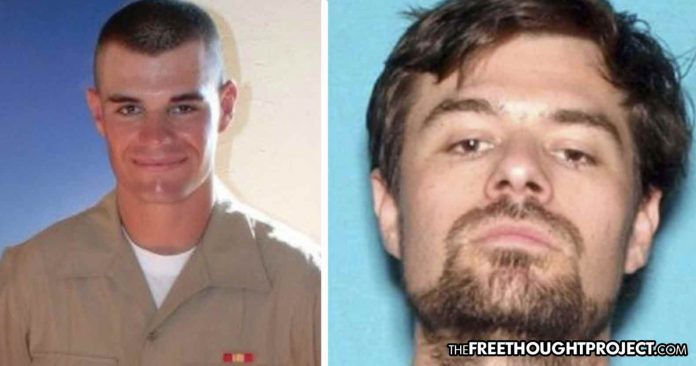 Thousand Oaks, CA — Another tragic mass shooting has taken place and, as usual, both sides are using it to further their political agenda. As the left blames guns and the right blames mental illness, both sides are completely missing the elephant in the room. If Ian David Long was diagnosed with PTSD, as reported, he was likely prescribed a slew of medications from the VA which have been tied to most every mass shooting in recent history.

According to his neighbors and family, Long suffered from PTSD. While those who suffer from PTSD can have a myriad of horrific symptoms, homicidal ideation is not one of them. However, the drugs the VA doles out to treat PTSD most certainly carry warnings just like this.

Like many of the recent mass shooters, Long was visited by police for acting irrational and displaying signs of aggression and violence before the shooting. He was most recently visited by police in April after neighbors reported hearing him screaming and sounds like he “was tearing down the walls with a hammer.”

Not surprisingly, there have been no calls by the mainstream media to delete Facebook and Instagram like the ones that led to the deletion of Gab last month.

Long also filmed himself as he opened fire on Borderline Bar and Grill in Thousand Oaks, holding his Glock .45 in one hand and his cell phone in the other, according to police sources cited by TMZ.

What’s more, in the post allegedly made by Long on Facebook, the writer says: “I hope people call me insane… (laughing emojis).. wouldn’t that just be a big ball of irony? Yeah.. I’m insane, but the only thing you people do after these shootings is ‘hopes and prayers’.. or ‘keep you in my thoughts’… every time… and wonder why these keep happening…”

Could Long’s post on Facebook been a reference to the prescription drugs he’d been taking? While his sentiment closely resembles that of the people who call for gun control after shootings, considering he was about to use a gun, it could also be referring to the drugs that may have led to him having the thoughts that made him go into the bar that night.

It is important to note that there are tens of thousands of veterans with PTSD who live their lives as close to normal as possible and never dream of carrying out such horrifying violence. The overwhelming majority of people with a mental illness are not a threat and should never be demonized as such—especially in instances like this following a mass shooting.

That being said, however, the treatment for various mental illnesses should be highly scrutinized.

While marijuana has shown to be effective at treating PTSD, federal law prohibits its use and the VA is not allowed to prescribe it. Instead, dangerous SSRIs/SNRIs are recommended by the VA to treat PTSD, like Zoloft, Paxil, Prozac, and Effexor.

As TFTP has reported on numerous occasions, the majority of mass shooters have links to psychological medications that carry serious warnings for side-effects on their labels.

David Katz, Stephen Paddock, Omar Mateen, Gavin Long, Eric Harris, Dylan Klebold, James Holmes, and Nikolas Cruz, all have one thing in common other than the mass murders they carried out. They were all reportedly taking prescription drugs which alter their state of mind and carry a host of negative side effects ranging from aggression and suicide to homicidal ideation.

The issue of psychotropic medication playing a role in mass shootings is not some conspiracy theory. It is very real and the drug manufacturers list these potentially deadly side effects on the very inserts of every one of these drugs. But the mainstream media and the government continue to ignore or suppress this information. Why is that?