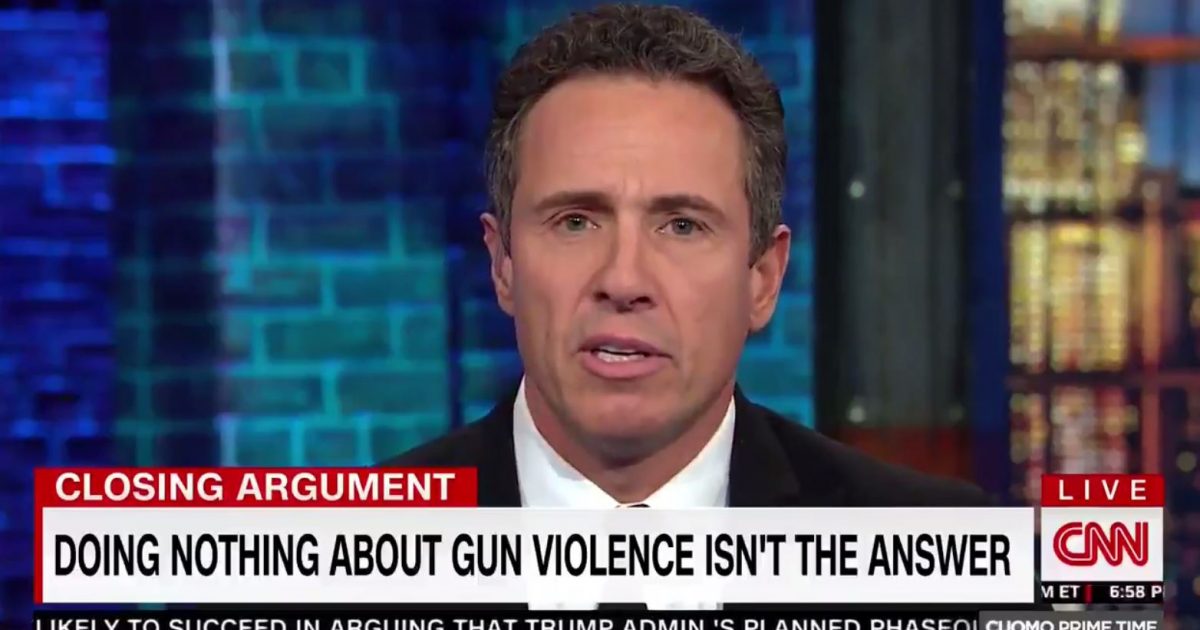 It’s a natural reaction for Christians and other people of faith to offer thoughts and prayers whenever something tragic happens.  But it seems that’s not good enough for CNN propagandist Chris Cuomo, who attacked and insulted people of faith during his Thursday program as he was making his latest pitch for gun control.

He also claimed — falsely — that politicians who express “thoughts and prayers” after a mass shooting are mocking the victims, Newsbusters said.

He wasn’t finished: “And prayer — you think leaving it to God is the answer? We pray for strength. We pray for wisdom, for resolve, but we clearly don’t want to act on any of those here, so what are you praying for?”

Newsbusters also tells us that Cuomo displayed “the frequently cited poll alleging that 97 percent of Americans want “universal background checks” for gun purchases even though, as previously documented by NewsBusters, such polling results have proven to be very misleading.”

Here’s video of his comments, as posted to Twitter by Ryan Saavedra:

CNN's Cuomo: "You mock those who lost loved ones" in shootings "when you offer thoughts & prayers…And prayer? You think leaving it to God is the answer?"

Cuomo: "is it ridiculous" to ask if we would act if a "stadium full of children…holding puppies…were all shot & killed? pic.twitter.com/OBXljqfXcy

Reaction to Cuomo’s bigoted anti-gun statement was pretty much what you’d expect:

God is always the answer.

Well, he is a propagandist for CNN, the far-left cable outlet dubbed the “least-trusted” name in network news, so that would explain a lot.

Nobody better say anything resembling a prayer when this guy passes away.

Wouldn’t want to “mock” him.

One person turned Cuomo’s statement on its head:

10 NFL stadiums full of children are brutally killed every year by abortion… but you do not act, @ChrisCuomo. https://t.co/9nUnTdF2TG

Maybe, if Cuomo really cared as much as he lets on, he’d express the same sentiment about abortion.  Or drug use.  Or any number of ills that plague the nation.  But he won’t.  Remember, this is the same CNN hack who actually said that Antifa’s activities are moral.