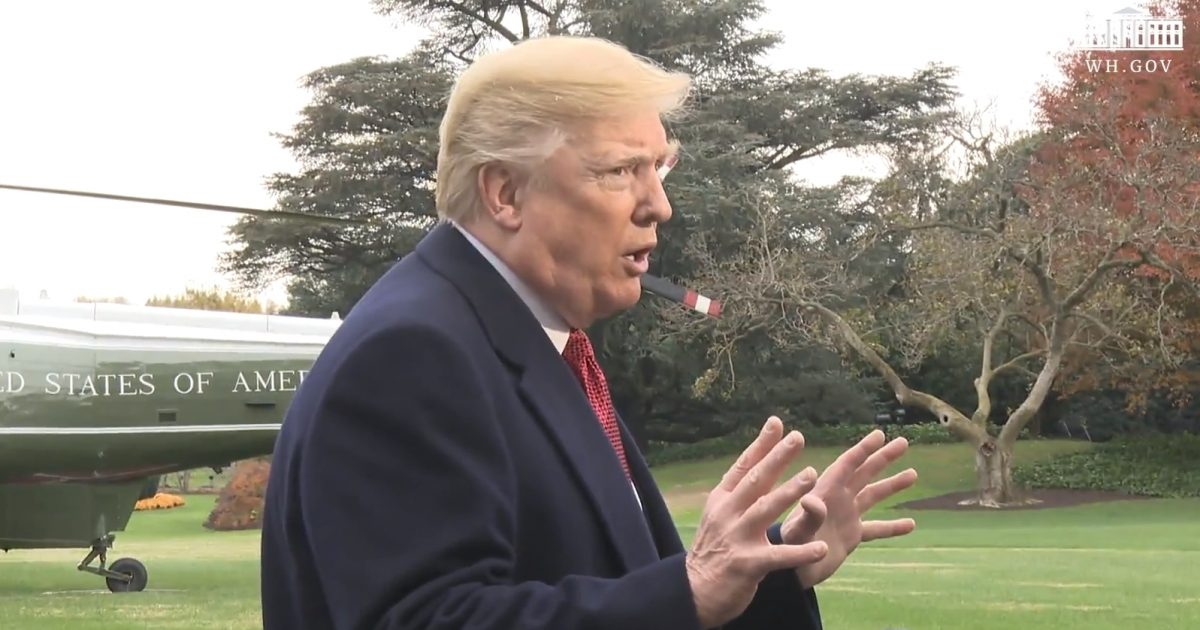 in which she proclaimed she would “never forgive” President Trump for promoting the “birther movement against her husband Barack Hussein Obama Soetoro Sobarkah.    Trump addressed her in the press by saying, “I’ll never forgive [President Obama] for what he did to our United States military…” Trump also added that he wouldn’t forgive him “for many other things,” which he said he would “talk about in the future.”  Was this a hint at going after Obama for his many crimes?

“She got paid a lot of money to write a book, and they always insist that you come up with controversy,” Trump told reporters at the White House before he left for Paris. “Well, I’ll give you a little controversy back. I’ll never forgive [President Obama] for what he did to our United States military by not funding it properly. It was depleted.”

Trump referred to the military’s equipment as “old and tired.”

“I came in and I had to fix it and I’m in the process of spending tremendous amounts of money, so I’ll never forgive him for what he did to our military,” Trump said.

Trump also added that he wouldn’t forgive him “for many other things,” which he said he would “talk about in the future.”  That part made my ears perk up and wonder if that is a hint at the fact that he is actually going to go after Obama or not.  It certainly seems the gloves are off after the elections.  We’ll see.

It’s kind of funny actually because Michelle Obama knows exactly who started the “birther” movement.  It was none other than Bill and Hillary Clinton because they knew Obama’s birth certificate was a fake.

In fact, what’s ironic is that Donald Trump said that it was the Clintons who started the birther movement, which The Washington Times agreed with him.  While self-professed fact-checking sites like Snopes and Politifact want to only deal with a memo from a campaign adviser to Hillary Clinton, who recommended that she begin her statements with the fact that she was born in middle America, they never deal with an interview conducted back in 2012 by author and investigator Jerome Corsi, who spoke with Bettina Viviano.

Ms. Viviano started her own film production company in 1990 after serving as vice president of production for Steven Spielberg’s Amblin Entertainment.

Ms. Viviano’s credits include the second and third “Back to the Future

” and the third “Indiana Jones” film

At that time, she told Corsi that the Clintons were the original birthers.

“Everybody who has called this a conspiracy from the Republicans or the tea party, they need to know who started it – the Democrats,” she said.

“It was Hillary and Bill, and it percolated up from there,” said Viviano, who had access to the campaign through a documentary she produced on the claims of delegates that Obama and the Democratic National Committee were stealing the nomination from Hillary.

“In the world we were in, with [Hillary’s] super-delegates and delegates, it just was, ‘He’s not legit – that’s the end of it, period, end of story.’ It wasn’t up for discussion,” Viviano told Corsi.

In that same interview, Corsi reported that Viviano went further:

Viviano said that she was on a conference phone call during the primary season in the spring of 2008 in which she heard Bill Clinton refer to Obama as ineligible for the presidency.

In the course of the phone conversation with Hillary delegates, she recalled, Bill Clinton spoke of Obama as “the non-citizen.”

“In the world we were in, with [Hillary’s] super-delegates and delegates, it just was, ‘He’s not legit – that’s the end of it, period, end of story.’ It wasn’t up for discussion,” Viviano said.

Michele Thomas, a Hillary campaigner from Los Angeles, confirmed to WND that she learned from “many people who were close to Hillary” that Obama “was not eligible to be president.”

Thomas led a nationwide petition drive among delegates to force a vote on Hillary’s nomination at the convention after then-DNC Chairman Howard Dean announced her name would not be put into nomination and Obama would be declared the winner by unanimous acclamation.

Viviano said that it was understood that Bill Clinton would eventually go public with his contention that Obama was ineligible for the presidency.

“He, I believe, was frothing at the mouth to tell the truth about Obama,” she said.

In the meantime, she recalled, the former president would make ironic references in public in which he “teetered” on revealing he position.

“He would go on camera,” Viviano said, “and jokingly make comments about, you know, ‘Is Obama qualified to be president? Well, if he’s 35 and a wink, wink, United States citizen, I guess he’s qualified.’”

She claimed, however, that Bill Clinton’s intention to unequivocally state to the public that Obama was ineligible was stopped in its tracks by the murder of a close friend of the Clintons, Arkansas Democratic Party Chairman Bill Gwatney, just two weeks before the Democratic National Convention in Denver.

Gwatney was killed Aug. 13, 2008, when a 50-year-old man entered Democratic Party headquarters in Little Rock and shot him three times. Police killed the murderer after a chase, and investigators found no motive.

The Clintons said in a statement that they were “stunned and shaken” by the killing of their “cherished friend and confidante.”

Viviano said a campaign staffer who was close to Hillary, whose name she requested be withheld for security reasons, told her Gwatney’s murder was a message to Bill Clinton.

“I was told by this person that that was ‘Shut up, Bill, or you’re next,’” she said.

The campaign adviser, according to Viviano, said that despite the intimidation and threats, Bill Clinton was prepared to speak out about Obama’s eligibility

“And then,” Viviano said, paraphrasing the staffer, “they went in and said, ‘OK, it’s your daughter, now, we’ll go after.’

“And then Bill never said anything.”

And let’s not forget two other Clinton supporters who testified that the Clintons did start the “birther” movement.

So, no, President Trump was not the one who brought this to her family’s front door.  It was the Clintons, and there have been several Democrats asking why Obama as fraudulent ids, such as Mark McFarlin.

However, Obama has declared on many occasions that have been captured on video that he was born in Kenya and his grandmother affirmed that.  Michelle Obama has called Kenya his “home country.”   Mr. Obama also declared Kenya to be “the country of my birth.” The Kenyan ambassador has declared Obama was born in Kenya and we have the record of the Kenyan Parliament where they declared the same thing.  Far from Trump starting anything, he was merely picking up on what everyone else who looked into the matter already knew, Obama was a fraud and not eligible for the office.

Of course, though Trump called Obama out on the birth certificate, once the demonstrably fake document was uploaded to WhiteHouse.gov, which has subsequently been removed, Trump dropped the issue, which was a shame.

Obama is a man that usurped the people’s White House for eight years and yet, he wasn’t even qualified to work at your local McDonald’s, according to E-Verify.

I’ll go a step further than Trump.  Obama didn’t just do things to the military that cost American lives, it’s what he did to America, along with his accomplices in Congress, that has really crippled us.