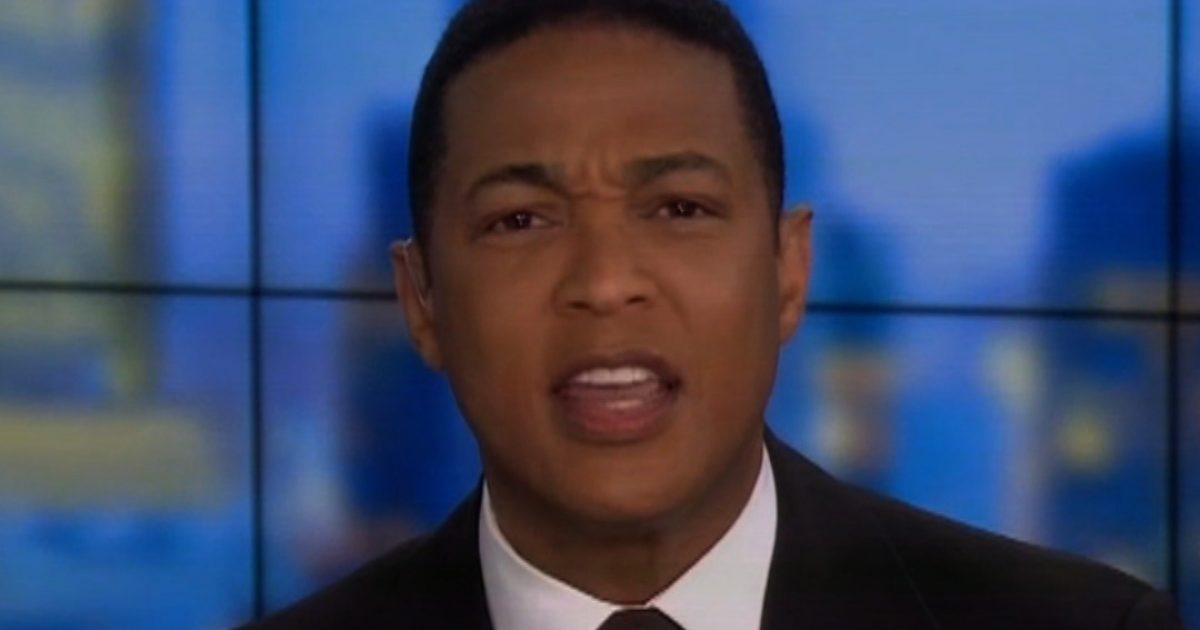 CNN’s Don Lemon has found himself in the middle of a controversy for claiming, in the wake of a shooting in a Kentucky supermarket, that “the biggest terror threat in this country is white men.” When criticized, Lemon doubled down, claiming that “the evidence is overwhelming.”

Ironically, Lemon began his venture into counterterror analysis by saying: “I keep trying to point out to people not to demonize any one group or any one ethnicity.” He then did just that. Lemon continued: “[W]e keep thinking that the biggest terror threat is something else — some people who are marching towards the border like it’s imminent.” The real terror threat, he said, was not those marchers:

[W]e have to stop demonizing people and realize the biggest terror threat in this country is white men, most of them radicalized to the right, and we have to start doing something about them. There is no travel ban on them. There is no ban — you know, they had the Muslim ban. There is no white-guy ban. So what do we do about that?

Responding to the outcry created by his remarks, Lemon later clarified:

Earlier this week, I made some comments about that in a conversation with Chris [Cuomo]. I said that the biggest terror threat in this country comes from radicals on the far right, primarily white men. That angered some people. But let’s put emotion aside and look at the cold hard facts. The evidence is overwhelming.

He also referenced several studies, including a 2017 report from the Nation Institute’s Investigative Fund and the Center for Investigative Reporting’s Reveal, which found that from 2008 to 2016, there were almost twice as many terrorist incidents carried out on U.S. soil by right-wing extremists — many of whom are white — than by Islamist extremists. It showed there were 115 incidents involving right-wing extremists and that those that ended in death were more deadly than incidents carried out by other groups.

So people who were angered about what I said are missing the entire point. We don’t need to worry about people who are thousands of miles away. The biggest threats are homegrown. The facts prove that.

No, they don’t. It is a false claim that “white men” or “right-wing extremists” are a bigger threat to Americans than Islamic jihad terrorists.

At my site Jihad Watch, I’ve tracked jihad activity in the United States and around the world since 2003. In the course of that fifteen-year span, I’ve posted hundredsof reports on failed jihad plots inside this country. No one was killed or injured in those, and for that we can all be grateful.

But failed plots are quickly forgotten. They shouldn’t be.

Most Americans, undoubtedly including Don Lemon, have no idea how indefatigably jihadis are continuing to attempt mass murder inside the United States. Just last week, we heard of a Muslim in rural South Carolina who planted a series of bombs around his county and threatened more. In Alabama, a 22-year-old Muslima worked to facilitate support for al-Qaeda. In Ohio, a Muslim was arrested at an airport; he was planning to go to Afghanistan to join the Islamic State (ISIS).

And that’s just this past week.

If you follow the Post’s link to the Government Accountability Office, and read page 6 of the report there, you’ll see that the count of fatalities committed by “far right wing extremists” and “radical Islamist extremists” begins on September 12, 2001. Why?

Further, the comparison doesn’t take into account the fact that there is a global network of Islamic jihadis. They are found on every inhabited continent. Major jihad organizations such as al-Qaeda and the Islamic State have repeatedly called upon Muslims to murder Americans.

By contrast, there is no global network of “right-wing extremists,” and they have not called for the indiscriminate murder of American civilians.

This propaganda is everywhere, but all the repetition of these lies doesn’t make them true.