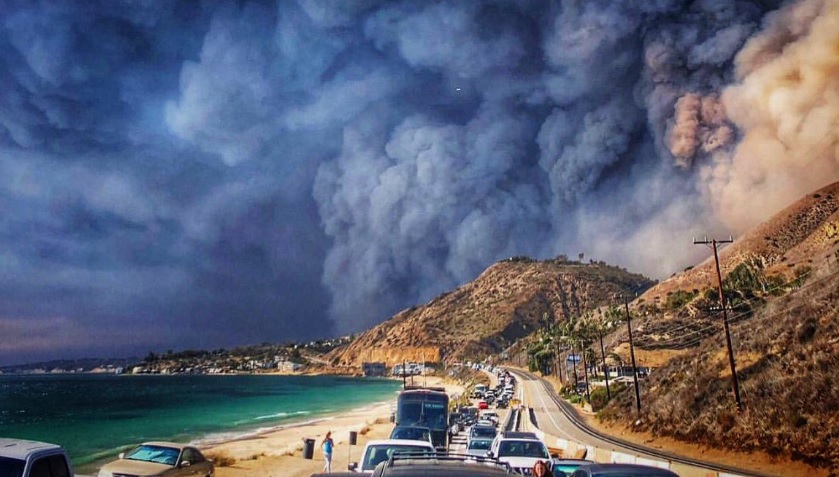 (Natural News) Actions have consequences, and bad actions often have bad consequences. In much the same way that liberal policies have burned Venezuela’s economy to the ground, California environmentalist policies have unleashed a catastrophic fire that has so far claimed the lives of 11 people and countless animals.

This is what liberal policies always lead to: Destruction, pain, suffering and death.

We pray for those who are suffering through this catastrophe, but above all we pray that the people of California might wake up and realize this disaster is self-inflicted and can be prevented. But that can only happen if dangerous liberal policies that promote these catastrophes are finally stopped.

Years ago, the California government began interfering with local efforts to bulldoze the deadwood out of forests as part of a forest management plan to reduce fire risk. This was all done, of course, under the banner of “environmentalism,” usually with emotional pleas to “save the wildlife” by leaving all the forests alone.

Year after year, the deadwood built up. It was only a matter of time, of course, before a fire would be ignited by lightning (Mother Nature’s natural fire starter). Fueled by the tremendous underbrush that was no longer being cleaned out of the forests, the fires erupted with catastrophic ferocity.

“Extreme environmentalists have shut down public access. They talk about habitat, and yet they are willing to burn it up,” warned Interior Secretary Ryan Zinke in an interview with KCRA. “This has nothing to do with climate change. This has to do with active forest management,” he said.

Liberals, you see, don’t believe in forest management. They don’t want fire breaks to be maintained, and they don’t want fire access roads to “disrupt” forest ecology. So in their effort to prevent humans from having any impact at all on forests, they prevent commonsense management activities from taking place that would help prevent forest fires.

This is how liberals think: They demand authoritarian control so they can create a liberal utopia, but when their ideas are implemented, they deliver absolute Hell.

“There is no reason for these massive, deadly and costly forest fires in California except that forest management is so poor,” tweeted President Trump. And he’s right. “Billions of dollars are given each year, with so many lives lost, all because of gross mismanagement of the forests.”

There is no reason for these massive, deadly and costly forest fires in California except that forest management is so poor. Billions of dollars are given each year, with so many lives lost, all because of gross mismanagement of the forests. Remedy now, or no more Fed payments!

Liberals, of course, blame “climate change” instead of their own disastrous policies. As Zero Hedge explains:

As University of Washington Climate Scientist Cliff Mass pointed out in an analysis of the factors contributing to California’s wildfires, climate change isn’t driving climate change; rather, poor land management policies and population growth in once-rural areas have been by far the biggest contributors. According to one recent study cited by Mass, the risk of fire increased in once-rural areas as populations increased, placing buildings, plants, vehicles and other ignition sources in fire-prone areas that were once sparsely populated.

None of us should be surprised that the insane policies of liberals always lead to these people creating their own Hell. Every city, state and nation run by Leftists has either already plummeted into collapse or is on its way there.

Liberal ideas are bad ideas. They don’t work. They’re rooted in insanity, emotion or irrationality rather than cause and effect. Liberals think “wishing” is reality, which is exactly why they think there are 67 genders… or 85… or whatever the number has expanded to this week. In exactly the same way that liberals ignore biological reality and push “gender identity” nonsense, they also ignore forest management reality and pretend that forests won’t burn up if humans don’t touch them.

It makes me wonder why all the liberals in California don’t simply announce today that they “self-identify” as people living in an area where there are no fires. Wouldn’t that make the fires go away, according to liberal logic? Since liberals believe reality is completely subjective, why can’t they simply wish away fires, earthquakes, floods and droughts? (Answer: Because good intentions don’t count. What matters is cause and effect.)

Instead of facing reality and solving problems with practical, real-world solutions, liberals blame imaginary causes for all the disasters they unleash. The current target to take the blame for all natural disasters is “climate change” — a work of complete fiction dredged up by liberals desperate to blame California’s atrociously bad water management, forest management and topsoil management policies on the petroleum industry.

Before long, California will have to find another scapegoat to blame for its astonishingly dangerous debt spending and public pension policies, all of which will drive the state into financial bankruptcy and destitution. If you think the streets of San Francisco are bad now, just wait until the state suffers the financial collapse that’s sure to break. Mass homelessness, disease and crime will make cities like Los Angeles uninhabitable by civilized people. (See CaliforniaCollapse.news for more coverage.)

Quite literally, liberals “torch” everything they touch. Poof! Economies, ecosystems and entire nations go up in smoke due to leftist policies, all of which are rooted in sheer delusion and bad ideas laced with “good intentions.” But good intentions don’t count when they’re wrapped in disastrous policy like offering free, unlimited health care to illegal aliens — another genius California concoction that will cause the state’s fiscal house of cards to collapse.

Delusional thinking does not solve real world problems, which is exactly why liberals must be stripped of all power

California liberals are delusional people, and that makes them dangerous to the rest of us. Sadly, when the liberal mob grows to a sufficient size, they can out-vote the rational people in society. When that happens, their bad ideas ruin the lives of everyone, including the good people who are trying to stop them.

If the people of California want to stop living in a Hell hole, they need to stop voting for Democrats. Sadly, it doesn’t look like that’s going to happen any time soon.

Until that day comes, the people of California will continue to suffer under their own self-inflicted disasters — ecological, economic, legislative, fiscal and otherwise.

The fires of Malibu you see today are prophetic foreshadows of what’s coming to the entire state if Democrats aren’t stripped of power.

I pray for all the people of California, including those who are suffering from the inescapable consequences of their own delusions.

Oh, and it’s not just California, either. The America voters are burning down the entire country by demanding debt spending and entitlement benefits that will lead the entire nation into financial abyss.