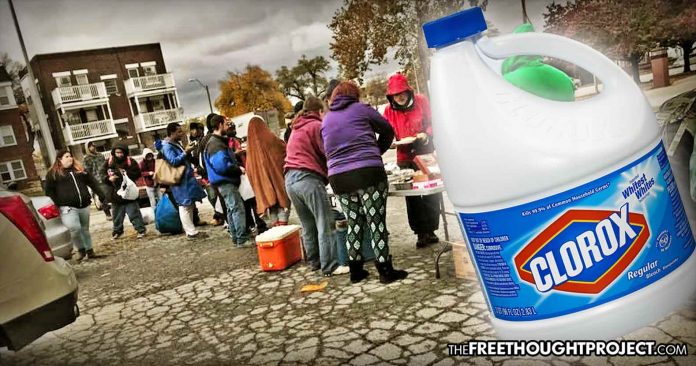 Kansas City, MO — Earlier this month, the kind folks over at Free Hot Soup Kansas City hosted a picnic at their local park and invited hundreds of homeless people to partake in the food. Because they are not a business or a food organisation and are just friends cooking with friends, members of the group stated that they do not need a permit. However, government officials disagreed and raided their event, seized the food, poured bleach all over it, and the homeless people expecting it went hungry that day.

Free Hot Soup KC had setup in the park on the morning of November 5 to eat and distribute to the homeless, home-cooked chili, foil wrapped sandwiches, and vats of soup. However, this food never made it to the mouths of those for which it was meant because the Health Department hadn’t been paid off in the form of a permit to allow it.

“E. coli or salmonella or listeria can grow in the food,” department director Rex Archer said. “And then you give that to homeless people who are more vulnerable, they will end up in the ER and even die from that exposure.”

The town’s mayor also believes in the notion that paying the state for a piece of paper to serve hungry people food is some sort of magical defense against food-borne illnesses.

“Regarding the incident involving Free Hot Soup,” Mayor Sly James tweeted, “rules are there to protect the public’s health, and all groups must follow them, no exceptions.”

Regarding the incident involving Free Hot Soup & @KCMOHealthDept: Rules are there to protect the public's health, and all groups must follow them, no exceptions. https://t.co/WaIo0QMI98

The group’s members disagree, however, and claim that destroying food is an attack on the homeless and those who support them.

“It’s about the criminalization of people who are homeless and the people who support them,” said Eric Garbison of the Cherith Brook Catholic Worker house in Northeast Kansas City.

State officials have been engaged in active surveillance of the group as they are outspoken in regard to feeding the homeless. Authorities knew exactly when and where the picnic would take place as they have infiltrated the group on social media.

“This is scaring all of us,” said Tara McGaw, 27, of Buckner, who started the gatherings in Belton. “We’re not an establishment. We’re not a not-for-profit. We’re just friends trying to help people on the side.”

“These are my friends,” said 28-year-old Nellie McCool of Merriam, who started the first Free Hot Soup gatherings three years ago after the Royals won the World Series, according to the KC Star. She was stirred, she said, by the way “everyone felt such a sense of community.”

“We’re a community of people who feel it’s their passion to share with the most vulnerable people in our community,” she said.

The good news is that the group was not intimidated by the food police and they showed back up on Sunday to help those in need.

“I think they’re angels,” Jackie Richardson said of the Free Hot Soup volunteers who he relies on to get food. “They’re angels from the Lord.”

Sadly, this is not the first time the food police have poured bleach on food and denied sustenance to the homeless. In 2016, TFTP reported on the same government entity in Kansas City who raided a food festival and dumped bleach on thousands of pounds of food meant for the homeless.

To be clear, E. coli is certainly something to worry about, however, it is not nearly as deadly as the police. In fact, police kill 30 to 40 times more people every year than e coli. Also, the overwhelming majority of e coli outbreaks and other food-borne illnesses come from factory farms and corporations whose representatives and owners are never prosecuted for the deaths related to their products.