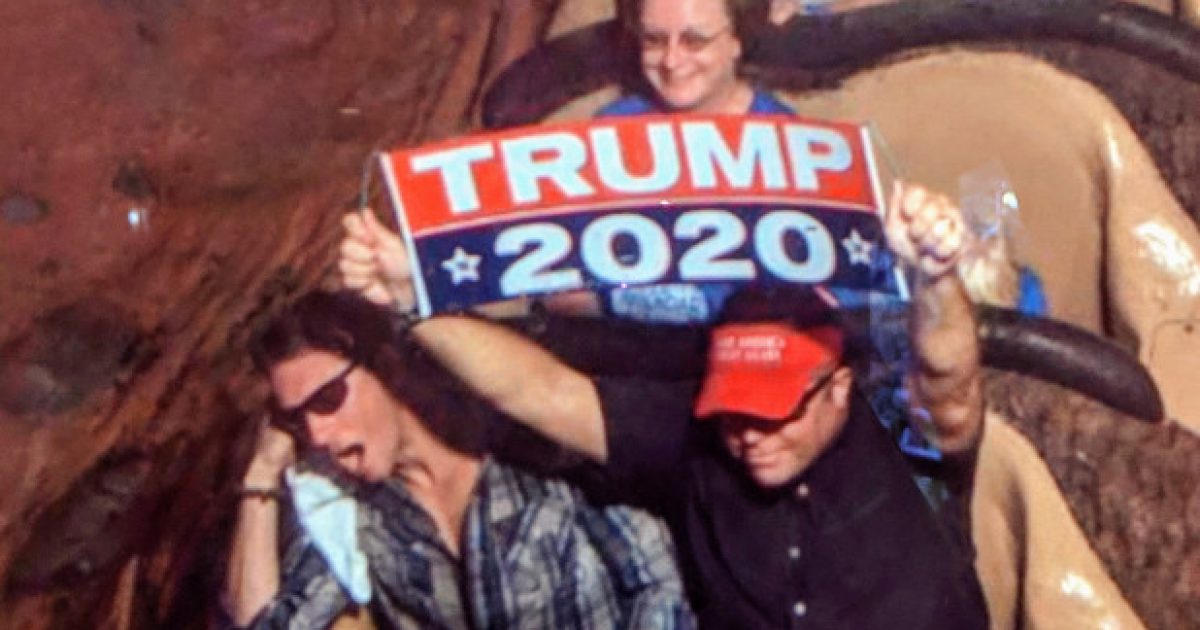 An ex-Marine veteran was banned from Walt Disney World and all its parks after waving a “Trump 2020” banner while riding Splash Mountain.  Interestingly enough, Disney apparently thought he was such a threat that they used 40 employees to escort out the 49-year-old veteran.

“I held up the sign for two seconds so I can take a picture,” Dion Cini told the New York Post. “You’re allowed to hold up signs on Disney rides — cameras, cellphones, and other stuff like that. People have been doing it for years. They just kicked me out ’cause of the context of the sign.”

Disney didn’t think this through.  Now, this story is going to go viral, Trump will get some major advertising from this and they are probably going to lose some business over this.  The guy was a loyal patron, Disney.  You just don’t do that.

Cini had been temporarily banned from Disney World property in 2017 for a similar incident, but management eventually decided to let him back in. He noted how that stunt involved a 20-foot “Trump 2020” banner and was done in a much more public place — just outside of the Main Street Railroad Station in Magic Kingdom.

“The first time might have been borderline inciting the crowd, and they called me back and said they’d let me in,” Cini explained. “The second time, I just help up a small sign…and I did not incite a crowd. So I actually proved my own theory. That they kicked me out ’cause of the context of the sign and not the policy.”

Disney insists, though, that Cini’s dismissal was not about the content of the banner or a political issue.

“Walt Disney World welcomes all Guests to enjoy our parks,” a spokesperson said in a statement to The Post on Tuesday. “However, demonstrations and the display of signs and banners is not permitted on the premises.”

The spokesperson explained that flags being held on attractions that have drops or operate at high speeds are considered harmful to other guests and unsafe to the operations of the attraction.

“We have previously reminded this guest about our rules,” the spokesperson said.

Seems to me that they are a bit hypocritical when it comes to their rules.  Allow one of the most disgusting things a person can do to be paraded in front of children, but ban a veteran from your parks for waving a sign while riding one of their rides.

And just so there is transparency here, The Post notes:

Cini told The Post that he chose to target Disney because he’s “just not happy with them and the way they treat the president.”

Disney’s CEO, Bob Iger, has been a vocal critic of the commander-in-chief, to the point where he quit his position on the White House advisory councils last year after Trump exited the Paris climate accord.

“As a matter of principle, I’ve resigned from the President’s Council over the #ParisAgreement withdrawal,” Iger tweeted at the time.

Cini believes his latest stunt proves that Disney is out to get Trump.

“I’d say the mission was accomplished,” he told The Post. “Time to move on to other channels.”

I’d say that Cini won and so did Trump as Iger left his council.