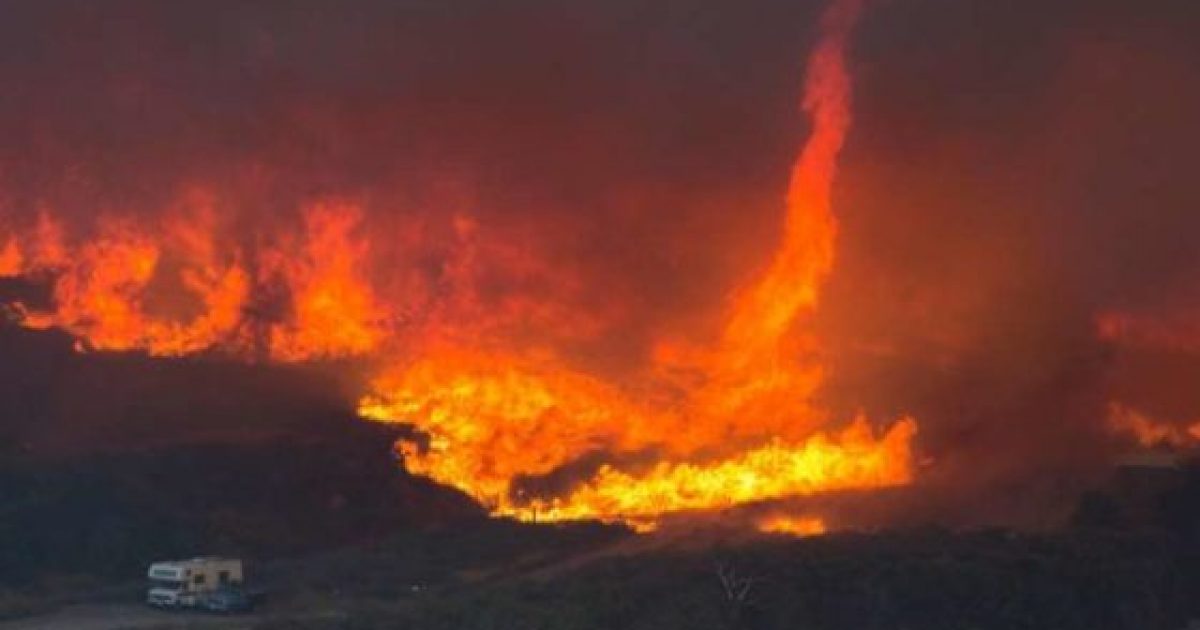 The Woolsey fire that has engulfed over 90,000 acres in California last weekend may have spread toxic and radioactive substances from a Superfund site. Activists, who believe authorities might be downplaying the risks of the toxins released into the air, say the burning of the nuclear waste site could further complicate health concerns.

According to RT, the Woolsey fire ripped right through the Santa Susana Field Lab (SSFL), a federal Superfund site in the Simi Hills that was the site of the worst nuclear meltdown in United States history in 1959. While the SSFL has been the site of multiple nuclear accidents, the worst took place in 1959 when a reactor vented nuclear material to avoid an explosion, ultimately releasing 459 times more radiation than the infamous Three Mile Island meltdown 20 years later. [PDF from a .gov website]

While the California Department of Toxic Substances Control said there was no reason to be concerned of “any risks other than those normally present in a wildfire situation,” locals aren’t so sure, pointing out that the agency has dragged its feet in cleaning up toxic sites. Many are accusing the government of a possible cover-up as well.

Physicians for Social Responsibility Los Angeles president Robert Dodge castigated the DTSC, pointing out that the site – now owned by Boeing – remains radioactive and polluted despite the agency’s promise to clean it up eight years ago. “These toxic materials are in SSFL’s soil and vegetation, and when it burns and becomes airborne in smoke and ash, there is real possibility of heightened exposure for area residents.”

The DTSC reassured residents that the SSFL facilities were not affected by the fire and claimed measurements of radiation and hazardous compounds from both the site and the surrounding communities were within normal levels, posing no danger other than that normally present in the aftermath of a wildfire. Thousands of people live within two miles of the site, which was originally developed to test rocket engines and conduct nuclear research in the 1940s. –RT

Today @CaliforniaDTSC and @lapublichealth stated that SSFL testing showed no release of rads or toxics from Santa Susana re #WoolseyFire . No actual data released,. Demand data -who where when testing done with what equipment, detection limits, & all measurements #showusthedata

Residents’ concerns, however, are not unfounded.  Reports that authorities are possibly downplaying the risks are fueled by the DTSC’s track record of broken promises, combined with the very real history of nuclear meltdown onsite. The California state legislature commissioned an Independent Review Panel to investigate the DTSC and found in 2016 that the agency had placed communities “at risk” by “failing to perform its basic function of protecting the public and environment from industrial hazardous waste and contamination.” The DTSC was held responsible for the Exide scandal in Vernon, in which a battery recycling plant leaked toxins into surrounding communities for decades, and was criticized for its backlog of hazardous waste permits.

Even those who do not consider themselves the diabolical “conspiracy theorists” are having concerns about the fire tearing through the SSFL site.

I'm not a conspiracy theorist, but I'm seriously upset that no one is talking about the fact that the #WoolseyFire was literally started at the Santa Susanna Field Lab – home to Area 4 (google it) THIS year a 7 year old has died of NEUROBLASTOMA from this place-prompting clean up

Local parents have repeatedly blamed toxic contamination at the SSFL site for their children’s cancers. The Centers for Disease Control has even designated lab workers from the 1950s who developed cancer as part of a “special exposure cohort” eligible for “compensation for their years of laboring in a radioactive environment.”