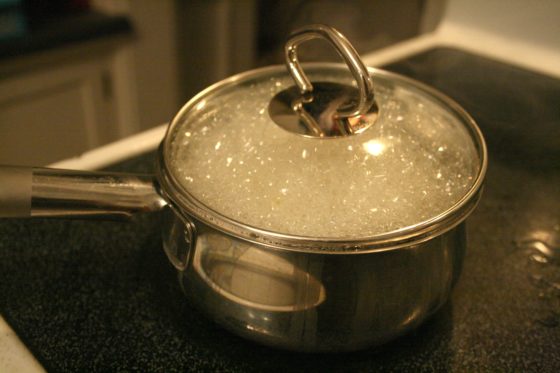 Warning: Put down any food you are consuming before reading this!

There’s a disturbing new trend among Indonesian teenagers.  The kids are boiling sanitary pads in water and then drinking the resulting liquid in an effort to get high.

Of course, please don’t try this at home – it should go without saying, but one never knows anymore. It appears that the kids trying to get high are boiling both used and unused female sanitary pads to make their liquid. But boiling used sanitary products is incredibly disgusting, not to mention potentially dangerous. According to the LAD Bible, the resulting broth that you get from boiling up used tampons and sanitary pads can offer the drinker a feeling of flying and has hallucinogenic properties.

A representative from the National Narcotics Agency, Senior Commander Suprinarto, said that the presence of chlorine in the mixture is what gives it the liquid the effects that it possesses. “The used pads they took from the trash were put in boiling water. After it cooled down, they drank it together,” he is quoted in the Straits News as saying.  That completely gag-worthy statement says everything anyone should need to know about where humanity is headed.  Our future does not look all that bright.

This insanely disturbing action surprisingly isn’t against Indonesian laws either.  The reason this is so shocking is because Indonesia has notoriously harsh drug laws.  That being said, several teenagers have still been arrested for boiling sanitary products and drinking the sickening liquid, although it isn’t known whether they were then charged with anything.

According to Jimy Ginting, as reported by the LAD Bible, this is not a new phenomenon. Ginting, who is an Indonesian advocate for safe drinking, claims that teenagers from a few places around Indonesia have been arrested for similar, if not identical, actions. And this goes as far back as 2016, according to Ginting. “I don’t know who started it all, but I knew it started around two years ago. There is no law against it so far. There is no law against these kids using a mixture of mosquito repellent and cold syrup to get drunk,” he told the Jakarta Post.