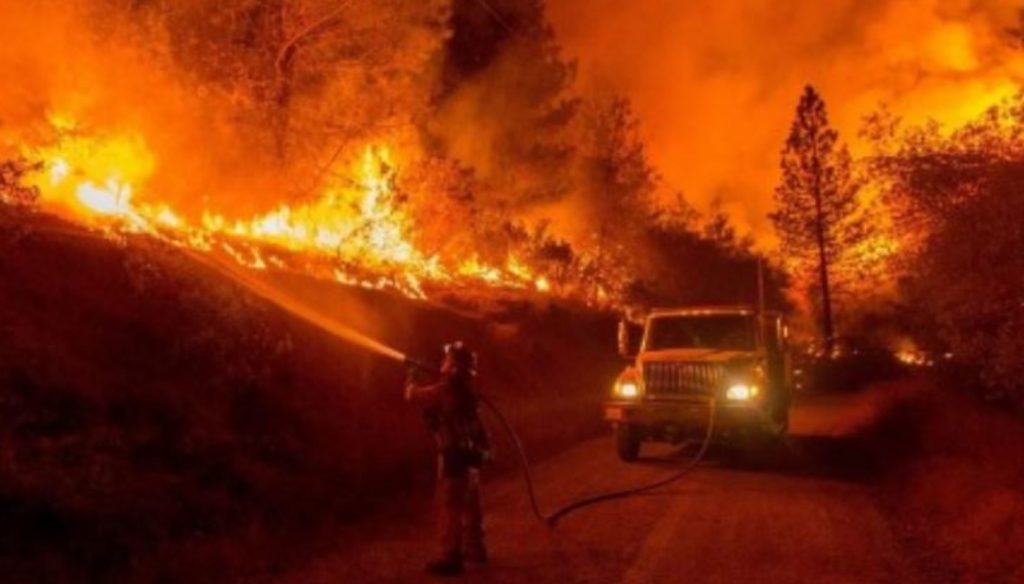 Apparently, weather can be used for warfare as U.S. Defense Secretary William Cohen has previously said, but it can’t be used to help the suffering people in California from wildfires? At least that’s what the government would want us to believe. So why hasn’t geoengineering been used in California to put out the wildfires?

What Cohen was alluding to at the time would only become known several years later in declassified documents — geoengineering.   The quote, although it seems out of place in time, exposes governments’ interest in a whole new type of weapon — modifying the natural weather to cause catastrophic damage and loss of life to “enemies” of the United States through electromagnetic waves.

In other words, using frequency to tap into the weather through directed energy weapons.  Energetic weapons such as lasers can be used to focus a frequency on the atmosphere. World-renowned physicist Michio Kaku explained the process in 2013 on CBS News. Historically, lasers and radio frequency aren’t the only weapons being used for weather control, as will become apparent while reading about aerosols and other methods that are used as well. (VIDEO)

Electromagnetic waves are defined as: “Waves propagated by simultaneous periodic variations of electric and magnetic field intensity and that include radio waves, infrared, visible light, ultraviolet, X-rays, and gamma rays,” according to Merriam Webster.

A few years before Cohen’s statement in 1992, the Wall Street Journal reported that the Russian company Elate Intelligent Technologies, Inc., had weather control equipment for sale, and used the advertising slogan, “weather made to order.”

In July 1974 amid tensions, the U.S. and USSR agreed to hold bilateral discussions to overcome the danger of the use of environmental modification techniques during the Cold War. The New York Times reported just a year later in 1975 that “A U.S.‐SOVIET BAN ON WEATHER USE FOR WAR IS NEAR.”

The paper quoted then-Senator Claiborne Pell (D) discussing the capabilities of weather warfare; something if written today would be laughed at and ridiculed.

“Mr. Pell said today that he was pleased to hear that the Soviet Union and the United States were closer to an agreement. He has said that potentially dangerous environmental warfare could involve climate control by melting the polar ice, steering of hurricanes, manipulation of rainfall, and artificial inducement of earthquakes and tidal waves,” The New York Times wrote.

Sure enough, in August 1975 at the Committee on Disarmament (CCD) the U.S and USSR drafted texts of the Environmental Modification Convention (ENMOD), formally the Convention on the Prohibition of Military or Any Other Hostile Use of Environmental Modification Techniques. ENMOD was set up with the sole purpose to prohibit the military or other hostile use of environmental modification techniques to prevent widespread, or long-lasting severe effects on the environment. The treaty was signed in Geneva on the 18th of May 1977 and entered into law in 1978.

A United States government document printed in the same year at the request of the United States Senate Committee on Commerce, Science and Transportation in November of 1978 states:

In addition to specific research programs sponsored by Federal agencies, there are other functions related to weather modification which are performed in several places in the executive branch. Various federal advisory panels and committees and their staffs — established to conduct in-depth studies and prepare comprehensive reports, to provide advice or recommendations, or to coordinate Federal weather modification programs — have been housed and supported within executive departments, agencies, or offices.

But the U.S continued its experiments, and in 1996 a report was conducted by top military personnel in the U.S., titled “Weather as a Force Multiplier; Owning the Weather in 2025,” revealing the urgency to implement these programs and that they had a long half-life to continue on to today.

A House of Representative bill known as the H.R.2977 “Space Preservation Act” was proposed in 2001 to ban the use of “exotic weapons” listing the following:

The bill noted that the term “exotic weapons systems” includes weapons designed to damage space or natural ecosystems (such as the ionosphere and upper atmosphere) or climate, weather, and tectonic systems with the purpose of inducing damage or destruction upon a target population or region on earth or in space.”

An additional group, the Convention on Biological Diversity, also banned some forms of weather modification or geoengineering decades later in 2010.

A prominent country that isn’t hiding its geoengineering effort is China who used weather manipulation to prevent rain from pouring on the 2008 Olympics in Beijing by firing special rockets filled with chemicals into the clouds. China then used the technology one year later before one of its parades to prevent rain. The Chinese Air Force claimed that the biggest weather modification operation in the country’s history cleared the skies over Tiananmen Square, using just 432 rockets to prevent rainfall on the Chinese national parade. Also in 2009, China caused a massive snowstorm.

Additionally, China put aside $168 million dollars last year that it intends to use to create a project that can produce torrential downpours. In the U.S. as recently as 2016 cloud seeding was used in LA to spread rain during the El Niño event to bring an end to the drought. They intended to do this by spraying the stratosphere with reflective metals such as aluminum. “If you put heat into the stratosphere, it may change how much water gets transported from the troposphere to the stratosphere, and the question is how much are you creating a domino effect with all kinds of consequences? What we can do to quantify this is to start with lab studies and try to understand the relevant properties of these aerosols,” Frank Keutsch, the Harvard atmospheric sciences professor leading the experiment, said.

Now is the time to pray for rain in California. Do your rain daces and your rain drum circles, play your HAARP and maybe we can use that magical technology called cloud seeding to create some rain clouds — like they did in Texas years ago — because California desperately needs the rain. These fires are out of control and the government holds the technology to stop the fires that are ravaging people’s homes.

Governments have also admitted to causing floods due to various experiments with the weather,but very few pay any attention and would rather listen to debunkers, despite the proof that many debunkers are paid shills for the government. The government feels the public doesn’t have a right to know that killer floods and weather can be created and controlled by scientists using frequencies.

I previously wrote an article on geoengineering at Steemit, where I expressed the harms of geoengineering and its dangerous history. However, geoengineering could be used in this situation to help and it’s not being used. So the obvious question to ask while many are suffering is why?

The blunt answer is money; and as Tupac and Michael Jackson’s songs, and now even DISL_Automatic’s song echoing in my ear, the truth is: they don’t care about us.

U.S. president Donald Trump has called the wildfires “a very tough situation” and threatened to pull federal aid. I don’t think it’s tough at all; use geoengineering to contain the Woolsey Fire, Camp Fire, and Hill Fire so people can save their homes and more importantly help save lives, don’t pull federal aid.

There are reportedly about 80 people who are still missing, and around a total of 50 people dead at the time of this report. The fires continue spreading as well and are nowhere near contained.