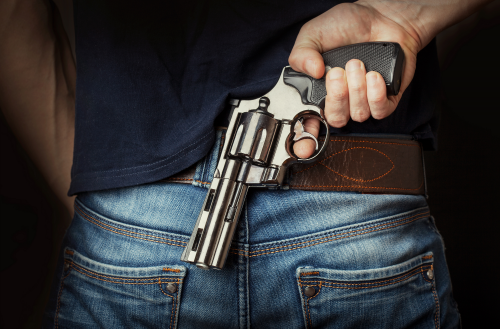 A Wisconsin company has decided to give its employees revolvers as Christmas gifts this year. The company says the gifts will promote team building and personal safety.

Ben Wolfgram, who co-owns Hortonville-based BenShot, a local business that produces glassware embedded with bullets, recently decided to give every employee a handgun as a Christmas present. The father-son business was started in 2015 in a small garage workshop in a little village of about 3,000 residents 100 miles northwest of Milwaukee. This is the first time Wolfgram has given guns as Christmas gifts to his employees. And it’s been a well-received decision.  Employee Chelsea Priest of Green Bay, Wisconsin, told the Appleton Post-Crescent that she believes the gift will empower her and help keep her safe. “I’ve never been a part of anything like this,” she said.

USA Today reported that the gift of a revolver is a choice, and employees can decline to accept the gun as a present. At least two employees initially declined the gift but are considering accepting the revolver after taking a gun-safety course that company executives have required before Wolfgram can begin giving out the guns. The business has 16 full-time employees, including several veterans, however, the business also has employees who had never fired a gun, said Wolfgram.

According to The Appleton Post-Crescent, Wolfgram said he wasn’t worried at all about mass shootings or the workplace violence often seen anymore because his business has a small staff and all of the employees know each other well. He says that he and the staff actually feel good now that the company has an armed staff. “For us, now, we have an entire armed staff,” he said. “I think that’s pretty good.”

Wolfgram is all but certain to receive negative feedback from the mainstream media, who would rather have every single American disarmed and defenseless against violent sociopaths.