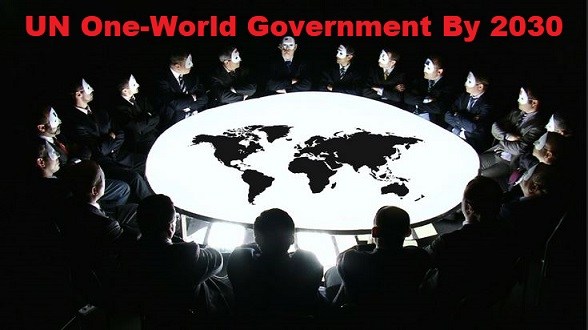 A “General Comment” is a UN agency’s interpretation of the provisions of the treaties to which it is a party.

According to a draft “General Comment” of the UN Human Rights Committee’s International Covenant on Civil and Political Rights, UN member governments:

An earlier version of the draft was read in July 2017, during the 120th session of the Human Rights Committee and made available online by the UN. “All interested stakeholders” were invited to comment on the draft. Although many pro-life groups submitted comments, their views are disregarded as the current version of the draft, as of October 31, shows that the language calling for governments to guarantee access to abortion and “assisted suicide” remains.

Meanwhhile, writing for American Thinker, Oct. 27, 2018, E. Jeffrey Ludwig reminds us that in 2015, the UN issued a program for world government, entitled Transforming Our World: the 2030 Agenda for Sustainable Development.

The 14,883-words document has 91 numbered sections addressing issues under the five headings of People, Planet, Prosperity, Peace, and Partnership; and contains 17 Sustainable Development Goals (SDGs) to improve life on the planet.

The earlier UN ideas and ideals of rights, freedom, equality, and justice are now subsumed under “sustainability”. The UN World Commission on Environment and Development defines “sustainable development” as:

The entire “Transforming Our World” document is cast in a stream of consciousness of pious platitudes for a utopian future. It is an outsize utopian dream. Five of the 17 items pertain to the environment.  There are goals for the cities, for women, for the poor, and even for life under the water. Absolutely no sphere of human activity is exempt from control by the UN….

The one-worlders of the 1950s and early 1960s are now in the UN driver’s seat, and they have made their move. The overlay of Marxist talk about “meeting needs” has moved to center stage. The UN has assigned itself a time frame for moving forward in its plan for planetary hegemony.

This projected transformation detailing (yet without details) a new world order of environmental responsibility and a significant reduction of poverty and hunger never speaks to the practical dimension of vast manipulations of people by cynical leaders and ignorant bureaucrats who hold their positions through terrorism and bribery. They never discuss incompetence and corruption, twin brothers in the family of venality. The document portrays a sincere world where all those in power want to help humanity despite the daily evidence of the selfishness, corruption, murderous intents, devilish manipulations, thefts, personal immoralities, hatreds, and utter depravity of many governmental leaders in every country in the world, and among the leaders of business as well. Is not the Agenda for Sustainable Development itself one of those devilish manipulations?