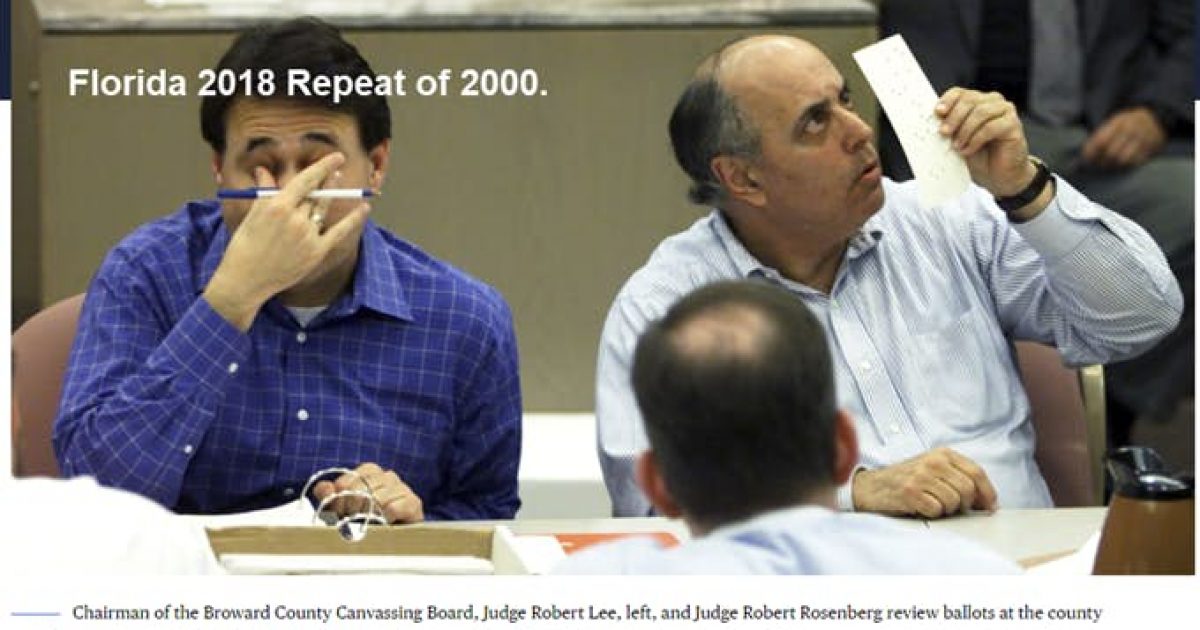 If you are looking for perfectly documented political corruption, start with this Tweet.

Lawyers for democrats Gillum and Nelson objected to the rejection of votes cast by non-US citizens. https://t.co/dnTybIby53 pic.twitter.com/D1tz4VouUx

I read through the entire thread. The claim looks accurate but I do not like the way it looks chopped off.

Brenda Snipes acknowledged the processes her office have been using aren’t perfect and that some non-citizens and felons have voted despite not being eligible — especially right before major elections when groups are actively registering new voters. But Snipes said the precautions her office takes are important to make sure eligible voters aren’t removed from the lists by mistake.

Given new charges, this election, I am confident that Snipes is about as corrupt as they get.

A recount in Broward County has been halted because of Failed Logic and Accuracy Tests with 10 elections machines.

Failed logic and accuracy. Can it get worse?

On Election Day, Broward County collected more than 600 provisional ballots. The vast majority were declared invalid by the county’s canvassing board judges for reasons ranging from registering to vote too late to previously voting to voting at the wrong precinct.

On Friday, the three-person canvassing board — on which Snipes usually sits — found about 20 of those 205 votes had mismatched signatures and declared them illegal. That means there are at least 20 illegal votes mixed into an anonymous pile of 205, all sitting in a machine that counted them but did not add them to the final count.

Republican Party lawyers immediately pressed Snipes about the future of those 205 votes and if they’d be counted. Snipes declined to answer and continued judging signatures on remaining ballots. There is no statute guiding what happens next.

Circuit Judge Carol-Lisa Phillips also held that Brenda Snipes, Broward’s supervisor of elections, was in violation of Florida public-records laws for not fulfilling a request for that information by Scott’s campaign.

Phillips ordered Snipes to turn over the number of all ballots cast in Tuesday’s midterm elections, broken down by absentee, early, and Election Day votes. She also ordered her to provide the number of ballots still to be counted.

“It’s a simple case about access to information,” argued attorney Jason Zimmerman, with the law firm Gray Robinson. “We’re not talking about recounts. … This is not a partisan issue.”

Crooked as Crooked Gets

If Scott wins Florida, I am 100% confident that he really won.

I cannot say the same if a recount gives the win to Nelson.

Meanwhile, Back in Arizona

Sinema led by 30,310 votes as of 1 p.m. ET on Sunday, according to the Arizona secretary of state’s office. That puts her ahead by 1.4 percentage points with more than 2.1 million ballots counted.

Trump had this to say.

Just out — in Arizona, SIGNATURES DON’T MATCH. Electoral corruption – Call for a new Election? We must protect our Democracy!

In striking contrast to events in Florida, Some GOP Officials Distance Themselves from Trump’s Claims of Misconduct.

“Just out — in Arizona, SIGNATURES DON’T MATCH,” Trump tweeted Friday. “Electoral corruption – Call for a new Election? We must protect our Democracy!”

Trump was swiftly rebuked by Republicans in the state, including Gov. Doug Ducey, who had just won re-election Tuesday.

We often hear the phrase: Every vote matters. And the #AZSen race is proof. So let’s get this right. All legally cast votes MUST be counted. Lawful votes in EVERY county in the state MUST be counted. 1/2

I would like to see an honest count in Arizona and Florida.

Unfortunately, we are not going to get one in Florida.