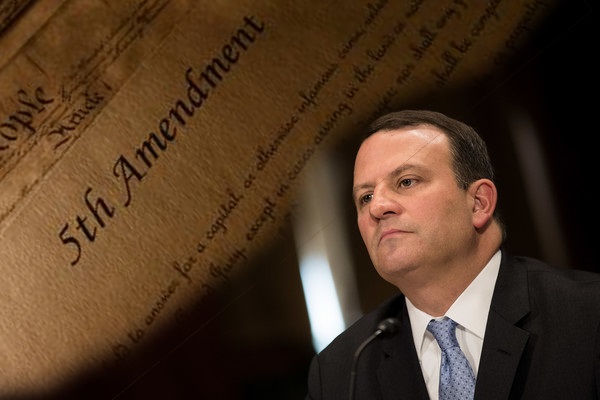 Federal Judge Timothy J. Kelly, a Trump-appointed judge, ruled that the White House had to restore CNN reporter Jim Acosta’s press pass because it potentially violated “due process” of law, and since no crime was committed and no charges have been filed, I believe that Judge Kelly has no idea of what due process is nor what the Constitution states about it and should be impeached.

On Friday, I reported:

U.S. District Court Judge Timothy Kelly, a Trump appointee, said the White House had violated Acosta’s Fifth Amendment right to due process by suspending his press badge without explanation or a chance for CNN to appeal the decision.

Kelly said White House officials couldn’t say who made the decision or how. The judge ordered the government to restore the credential while the rest of the case – which drew a slew of support from other media outlets, including USA TODAY – is argued.

But Kelly said he hasn’t considered at all yet whether the White House violated Acosta’s First Amendment rights. More arguments are expected Tuesday.

“I trust this litigation will continue at a rapid pace.” Kelly said.

Kelly went on to state, “The opportunity to be heard seems especially important in this case.  The government must provide Mr. Acosta due process if it is to revoke his hard pass.”

Judge Kelly did not rule on the big First Amendment questions CNN raised, instead limiting his decision to whether the White House had acted arbitrarily in denying Mr. Acosta a thing of value — in this case, the press pass that CNN says is crucial to him doing his job.

The judge relied on a 1977 case from the federal appeals court in Washington, D.C., where judges ruled the Secret Service couldn’t deny a press pass to a reporter in an arbitrary way — without notice or an opportunity to rebut — potentially violating the 5th Amendment’s right to due process.

“I have no choice but to apply that precedent here,” the judge ruled.

No choice?  Apply precedent?  How about applying the Constitution, Mr. Kelly?  No criminal charges were filed.  No crime was alleged.  Due process, under our Constitution, is about the violation of law and charges that go with that!

Here, honestly, I’m enraged that a judge would resort to a really bad precedent rather than adhere to the law.  The Fifth Amendment states, and I emphasize:

It is my contention that Judge Kelly is behaving badly by rendering a ruling, not base on law, but bad precedent.  As our Constitution states clearly:

It says nothing about precedent, Judge Kelly.  You are bound by the Constitution, Sir!

Furthermore, since Judge Kelly has behaved badly in this and rendered injustice rather than justice, he has qualified himself for impeachment, according to our Constitution, Article III, Sections 1 & 2.

The judicial power of the United States, shall be vested in one Supreme Court, and in such inferior courts as the Congress may from time to time ordain and establish. The judges, both of the supreme and inferior courts, shall hold their offices during good behaviour, and shall, at stated times, receive for their services, a compensation, which shall not be diminished during their continuance in office.

The judicial power shall extend to all cases, in law and equity, arising under this Constitution, the laws of the United States, and treaties made, or which shall be made, under their authority;–to all cases affecting ambassadors, other public ministers and consuls;–to all cases of admiralty and maritime jurisdiction;–to controversies to which the United States shall be a party;–to controversies between two or more states;–between a state and citizens of another state;–between citizens of different states;–between citizens of the same state claiming lands under grants of different states, and between a state, or the citizens thereof, and foreign states, citizens or subjects.

The trial of all crimes, except in cases of impeachment, shall be by jury; and such trial shall be held in the state where the said crimes shall have been committed; but when not committed within any state, the trial shall be at such place or places as the Congress may by law have directed.

Judge Kelly is succumbing to political pressure by a news outlet with a history of propaganda and lying to the American people.  CNN has forfeited any claim as an actual free press outlet because they have taken money from the federal government and have censored stories while slanting stories in the favor of Socialists and Communists who are opposed to our Constitution and our Christian heritage.

Squad Scum AOC Gets DUPED By Project Veritas- This Is HILARIOUS! 😂
AFF