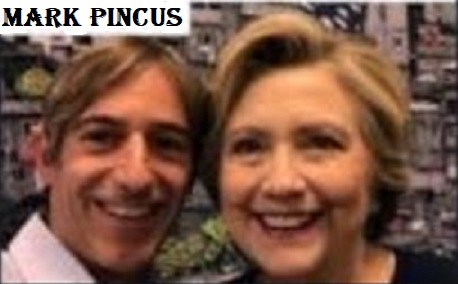 “For our struggle is not with flesh and blood but with the principalities, with the powers, with the world rulers of this present darkness, with the evil spirits in the heavens.” –Ephesians 6

The 2016 presidential election wasn’t just a political battle, it was spiritual warfare.

If you doubt it, recall that Satanists were among those who protested in Washington, DC, against Donald John Trump’s presidential inauguration on January 20, 2017.

Did you know that Satanists endorsed Bernie Sanders for the presidency?

And that the Clintons’ longtime friend and associate Larry Nichols says Hillary Clinton is a Satanist?

Here’s more evidence that the Democrat Party is the Party of Evil.

According to Wikipedia, with a networth in February 2018 of $1.54 billion, Mark Pincus, 52, is an Internet entrepreneur who was a founding investor of Twitter and Facebook. He is also the founder of Zynga, a mobile social gaming company; the startups Freeloader, Inc., and Support.com; incubator SuperLabs; and the co-founder of Win the Future (WTF), the “progressive left wing” insurgency movement within the already left-wing Democratic Party.

In the 2016 presidential election, Pincus was a supporter of Hillary Clinton, as seen in the pic below. He blames Hillary’s loss on “outside factors like Russian meddling”.

In 2003, at age 37, Pincus founded his third startup, Tribe.net, an early social network. Tribe.net partnered with major local newspapers and was backed by The Washington Post, Knight Ridder Digital, and Mayfield Fund and Guy Spier.

“We’ve kept Tribe going not because we believed it would turn into a phenomenal business success like Bebo or Facebook, but because I think it serves a really valuable role for the community.”

So, consider yourself forewarned.

On Tribe, members can initiate a discussion on a particular subject by starting a new thread. One of the threads is truly evil, titled “Newborn Snuff,” which was begun on October 2, 2015 by a member who calls himself BabySnuff. This is what BabySnuff wrote (WARNING: Graphic language):

Below are some of the comments on that thread:

“HAIL SATAN. its the best”

“HAIL SATAN! I need to give myself to him to become a temple 4 him to enter & instruct me how to fuck NB’s as a way of worshiping him!!”
“i want to ruff fuck bbys balls deep on my cock & worship satan with a large group of nepi bby snffers into 666!!!! ”