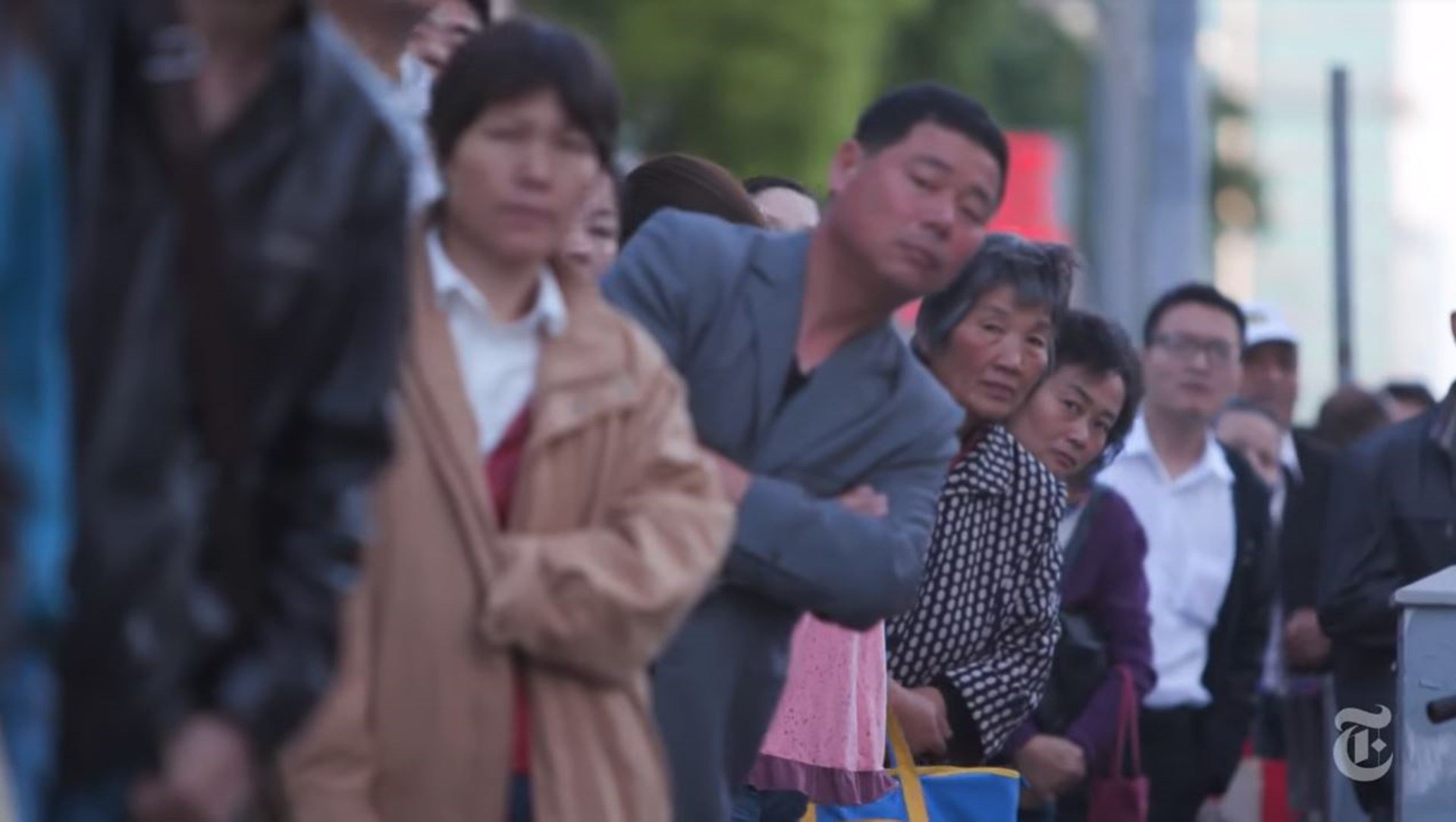 “Under Mao Zedong the Communist state provided free health care for all,” the narrator tells us. “Decades later China adopted a unique brand of capitalism that transformed the country from a poor farming nation into an economic superpower. Life expectancy soared. But the introduction of capitalism and the retreat of the state meant that health care was no longer free.”

I know first-hand how outstanding the care at private facilities is in China. Last year I had my appendix removed here. I accidentally walked into the public hospital directly across from the private hospital. The emergency room was filled with at least 100 Chinese patients.

Upon seeing my white European face, hospital staff directed me to the private hospital across the street, Shanghai United. I was welcomed by friendly staff who were fluent in English. The ER doctor was American. I had an ultrasound and CT scan performed within the first two hours. Eight hours after that, my appendix was removed, and I was high on morphine.

China’s private hospitals are the opposite of the chaos depicted in the Times’ video. Wait times are practically non-existent. You don’t have to bribe anyone to be seen.

The exceptional care that I enjoy here along with wealthier residents of China is, sadly, only a dream for most Chinese today. Why? Because it is precisely where you find the profit incentive restored and government regulation absent that you also find superlative health care.

In the video, the Times praises Chairman Mao’s introduction of “free” health care and claims that when capitalism was introduced into the country, the state retreated and care was no longer free.

Neither statement is true. First, health care was never free; it was paid for by tax revenues. Second, the state never retreated; rather, its regulatory apparatus became vaster and even more invasive. Out of sheer necessity, China allowed for the creation of private hospitals to ease the burden of the country’s heavily bureaucratic and deteriorating health care system.

The fact that the Times refused to visit even one private hospital or mention the higher cancer survival rates of patients receiving private care raises serious questions. At the very least, failing to feature a single private medical facility while blaming capitalism for the dysfunction of China’s public health system is intellectually dishonest.

The Realities of Socialism

The Times video begins with a man making drugs in his home for his elderly, cancer-stricken mother, a common practice among poor Chinese. He states that there are three kinds of drugs in China: expensive drugs from the West, smuggled drugs from India, and DIY drugs. However, there is a fourth category of drugs never mentioned: Chinese-developed medicine.

These domestic options aren’t sparse, either. China actually has the world’s second-largest prescription drug market. So why isn’t this man taking advantage of the cheaper, domestic option? The Times declines to investigate, but those of us who live here know exactly why he’s refusing Chinese medicine: the quality of the drugs is very poor.

Chinese doctors actually advise against taking Chinese prescriptions due to the lack of transparency on their ingredients, instead suggesting patients rely almost exclusively on Western medicine. (A Chinese pediatrician once warned me not to give my children a simple cough syrup developed in China.) So, while the Times contends that capitalism is killing the Chinese, it is the presence of capitalist-created drugs that allows the Chinese to survive.

In the 1980s, the government began divesting in public hospitals and relocated those funds to subsidize prescription drugs for the poor. Simultaneously, however, the government put price controls on the drugs, making it impossible to turn a profit selling them, which destroyed the incentive for developers. With a paltry investment and a near-zero profit policy, the drug industry is at a stalemate, producing garbage drugs that are unable to yield returns.

Why Hospital Lines Are so Long in China

The Times video depicts the ungodly long line most Chinese face to see a physician.

“It’s about 5 a.m. and about 100 people have gathered in line in downtown Shangai,” the narrator says softly. “This isn’t the line to the movies or a holiday sale. It’s the entrance to the Shanghai Cancer Center at Fudong University. Those who are willing to lose a night’s sleep trying to try to get in line have one question in their mind: will I get to see a doctor today?”

It’s an appalling scene. We see sick people waiting in massive lines to receive medical attention. Scalpers are selling places in line to those most desperate. Some people are unceremoniously pulled out of line by security right before entering the hospital (presumably for cutting).

There’s just one problem. The Shanghai Cancer Center is a public hospital, not a private one.

The long lines, scalpers, bribes, and physical fights with hospital staff—all of these exclusively happen in the public, communist, government-run hospitals. These things do not happen at China’s private hospitals.

In an egregious bit of sleight-of-hand, the Grey Lady asserts that capitalism is ruining Chinese health care while presenting us with a hospital where capitalism is not practiced. What viewers are watching is the medical system created by central planners.

Along with income from the municipal medical schemes that citizens must pay into, the state hospitals depend on foreign-made drug sales and testing for their revenues. This makes hospitals fertile groundfor bribes from pharmaceutical companies, unnecessary drug prescriptions, and excessive testing. The excessive testing is not only a giant waste of money, but in hospitals where doctors get less than three minutes with patients, it is a massive waste of time.

The government also heavily regulates reproduction programs due to the two-child policy, forcing hospitals to obtain a license from China’s Ministry of Health to perform fertility testing and treatments. Almost all of the licenses are only authorized for the state-run hospitals. Simply offloading the initial fertility testing to the private sector would take enormous pressure off the public system.

Market efficiencies are missing from China’s system because they were destroyed long ago by the tenets of communism. Private property and profit motive were replaced by a government-run system designed by central planners.

Sadly, the Times video ends with a quote from the now deceased elderly mother. She repeats what her doctor told her: “Your cancer is not yet severe, take some medicine and go home. You will be fine.”

That’s not the standard response one would expect after being diagnosed with a terminal illness, and viewers see why. The woman was denied treatment. Weeks later she was dead. There is a name for this: rationing.

Rationing can come in many forms, one being a dearth of primary care physicians (PCPs). In China, the government sets fixed salaries for PCPs, which are much lower than what one could earn in the private sector. Naturally, this attracts fewer professionals into primary care. In fact, less than 30 percent of medical school graduates choose primary care. Additionally, to ensure access to basic medical services for all, fees for services are set lower than costs at government-run facilities.

For the poor, this makes public hospitals appealing. Their inpatient treatment is usually fully or mostly covered by the government. And getting in isn’t always a problem. Chinese public hospitals often boast about the number of beds available — ranging from 1,000 up to 10,000 — in comparison to private hospitals, which usually have fewer than 500. The quality of the care is another story.

The absence of normal market forces creates a glaring problem: few doctors and many patients (particularly poor ones whose costs are fully covered). Hospitals simply can’t keep supply up with demand. Staffs are overwhelmed by the sheer number of patients, creating more stress in a high-pressure environment. Inevitably, people are denied care, hence the violence directed toward staff featured in the Times video. (In fact, stabbings and mob-style attacks have risen 23 percent a year on averagesince 2002, according to the China Hospital Management Association.)

The widespread dysfunction of China’s health care system depicted by the Times is not particularly unique.

The United Kingdom’s National Health Service is currently “imploding” as record numbers of patients are waiting 12 hours to get into emergency rooms. Last year, the BBC reportedpatients were literally dying in hospital corridors.

China’s experience is what inevitably results, sooner or later, from government-run medicine. The Times is correct to label it tragic. But it takes some real chutzpah to blame the tragedy on capitalists.

If the Times had wished to see capitalism in action, they had only to visit one of China’s private hospitals. I have been to the ER no fewer than six times in Shanghai at various hospitals. Each time I have been registered immediately and sent to a consultation room within 10 minutes of arrival.

And I even have the appendix scar to approve it.

Sarah Lilly is an American expat and political writer living abroad in Shanghai, China. She blogs at Red State Abroad.