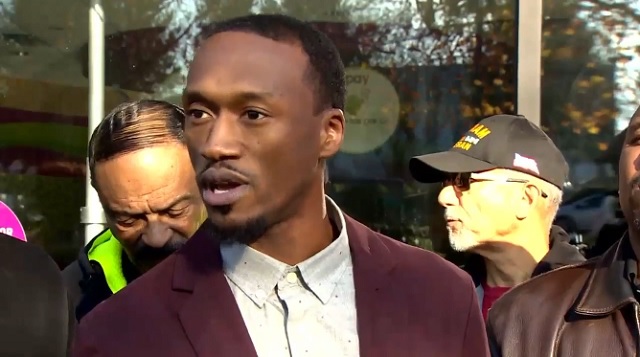 “You cannot allow white supremacy to scurry away in the corner and lick its wounds and regroup,” Byron Ragland, who is African-American, said during a press conference in front of a store he was asked to leave in Kirkland, Washington earlier this month after being accused of loitering.

Ragland’s comments were directed at Hispanic small business owner Ramon Cruz, who owns Kirkland Menchie’s in Kirkland, Washington. Cruz said he called police on Ragland on November 7 because he was sitting alone for 30 minutes in his store buying nothing and eyeing his employees, which made them feel scared.

“They are kind of scared because he looks suspicious,” Cruz told the dispatcher.

It turns out, Ragland was working as a court-appointed advocate supervising a visit between a mother and a son at the next table. Police learned that when they arrived, but asked Ragland to leave.

His attorney is threatening possible legal action and calling for “authentic actual justice.”

About 30 community members and police officers were at the rally.

“I’m sick of it, it hurts that it’s happening here where we’re supposed to be so progressive,” said Melinda O’Malley of Shoreline, who read about the story and felt compelled to attend Ragland’s rally to let him know the community stood with him.

Just so we’re clear here: Cruz’s employees saw a man sitting around their store, eyeing their employees and a young mother and son, felt threatened and called the police.

Police arrived, were explained the situation by Ragland and simply asked him to leave.

Even though the store owner who called the cops is Hispanic, Ragland responded by blaming “white supremacy” which he says has shown black people “no mercy” “over 400 years.”

The small town of Kirkland, Washington, which is extremely liberal and voted 65.61% for Hillary Clinton and 23.99% for Donald Trump in the 2016 presidential election, was held personally responsible for this 400-year legacy of slavery and informed it needed to have its white supremacist throat “stomped until it stops breathing” — and the town’s white liberals are fully on board.

Incidentally, we can chart the rise of this radical left-wing social justice/racial justice politics directly to 2012, which just so happened to be the start of Obama’s second term in office.