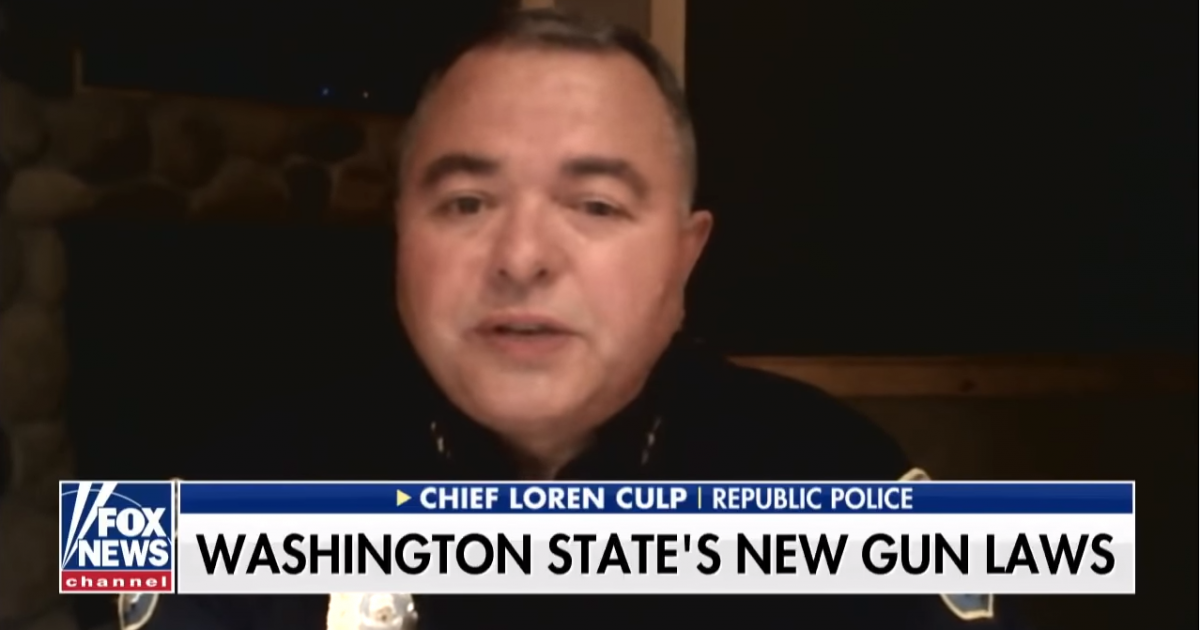 The small town police chief in northeast Washington who made headlines recently for announcing he would not enforce the state’s recently-passed gun control initiative because he believes it violates the Constitution told CFL in a telephone interview that Americans should never subject constitutional rights to a popular vote.

Passage of anti-gun Initiative 1639, which was opposed by every major rank-and-file law enforcement organization in the state, failed in Washington’s Ferry County by better than a 73 percent “No” vote. Republic, where Loren Culp is city police chief, is the county seat. He’s been on the job for nine years.

A graduate of Republic High School, he is a native Washingtonian. He attended grade school in the small town of Chimacum on the Olympic Peninsula, where his father was a Jefferson County sheriff’s deputy, before moving to eastern Washington. Culp served in the U.S. Army, traveled around the world and came back to the Evergreen State.

At a public hearing on his proposal to make the City of Republic a “Second Amendment sanctuary city,” Chief Culp noted to a standing room-only crowd that the U.S. is a republic, not a democracy.

“In a democracy,” Culp told the council, “the majority rules over the minority and in this case the big cities are telling us what is allowed and what isn’t. It’s like three wolves and one sheep voting on what’s for dinner.”

He noted that the Washington State constitution affirms that the right of the individual citizen to bear arms shall not be impaired.

When he concluded, he received a standing ovation. A decision on the proposal is pending.

Culp told CFL that provisions in the multi-faceted initiative “just slap you in the face.” He also said that the founding fathers “warned us about this.” In a republic, for which his city is named, the law protects the minority from the majority, he observed, and that appears to have been lost on the people behind the initiative.

Chief Culp has not been contacted by attorneys representing the Second Amendment Foundation and the National Rifle Association in their federal lawsuit challenging tenets of the initiative.

Culp is not the only law enforcement leader in the county to take a position on I-1639 sure to make its billionaire backers bristle. In a statement on the Ferry County Sheriff’s Department Facebook page, Sheriff Ray Maycumber observed, “Initiative 1639 has some constitutional issues which have and are being discussed thoroughly. I won’t and can’t violate the State or the Federal Constitution even if I wanted to. No authority exists under our system of law to do so other than amendment. As for the proposed city ordinance; It would be inappropriate for me to comment on the affairs of the City of Republic at this time, even more so when they have not asked me to.

“As a person who has spent most of my adult life in service to our system of justice,” Sheriff Maycumber added, “I must have faith that the courts and legislature will fairly try and lawfully apply due process to this initiative. They are aware of the oaths that peace officers take and the virtually impossible position enforcing this puts us in. I have no desire to subject the community that I serve to another poorly planned law with legal conflicts and vague guidelines, and will seek to support a legal challenge to this initiative as soon as I find an appropriate challenge is declared.”

The aftermath of the measure’s passage has the earmarks of an insurrection.