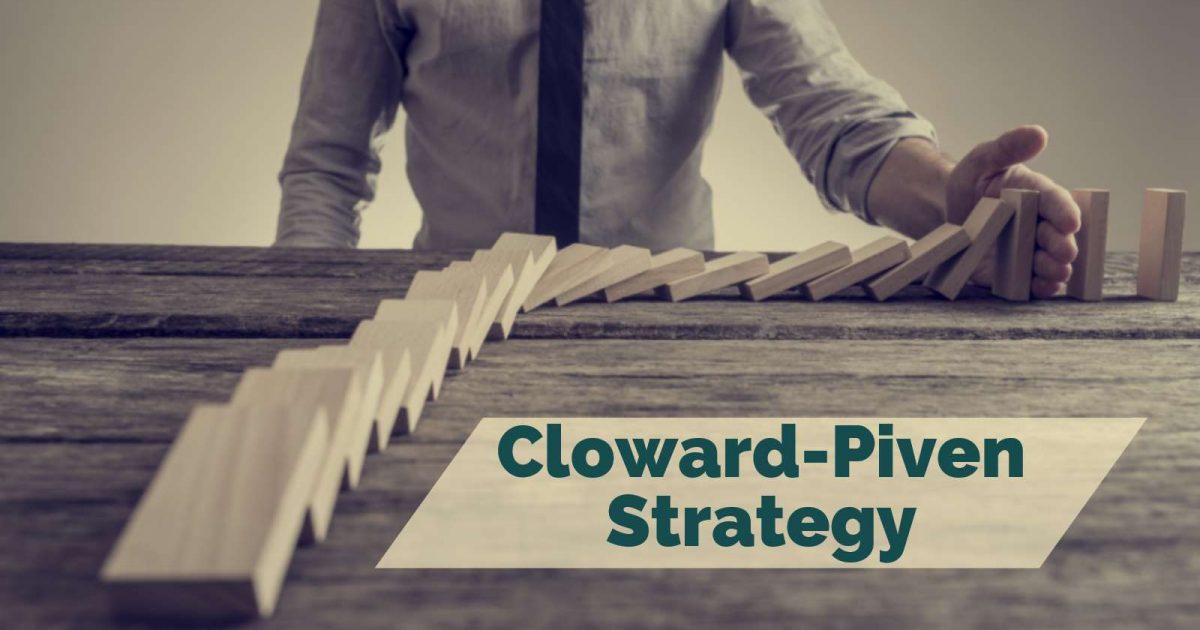 Many of us who follow politics are either familiar with or have at least heard of Cloward and Piven – Richard Cloward and Francis Fox Piven. They were `60s era radicals dressed up as Columbia University professors. Of course, we can probably describe most college professors in the same manner.

The famous, or infamous article describing their plan was originally crafted in the 60’s, and re-released in 2015 on The Nation.com website as part of “The Nation’s 150th Anniversary Special Issue.”

The article is entitled, “The Weight of the Poor: A Strategy to End Poverty.”

The essence of their scheme was/is, “A mass strategy to recruit the poor onto welfare rolls would create a political crisis that could result in legislation that brings an end to poverty.”

The strategy was/is to overwhelm the system – to so overburden government agencies with so many new welfare candidates, that the system collapses on itself. The theory is that the system could then be reset and reconfigured to resemble the redistributionist Marxist utopia these radicals have so long envisioned.

But now we can see the Cloward and Piven strategy to transform America being utilized across a whole spectrum of the left’s political ambitions – from redistribution of wealth, to immigration, to elections and voting.

It didn’t take long to begin to flood the system with new welfare recipients. As Glenn Beck explained: “from 1965 to 1974, due to the strategy and effort of Cloward and Piven, the total recipients on welfare rocketed from 4.3 million people to 10.8 million.”

The following year, 1975, New York City was forced to declare bankruptcy, due to its welfare system being overwhelmed. Total government spending estimates for FY 2019 are projected to be over $1.1 trillion. We’ve come a long way baby.

Seeing the success of their welfare state plan, the left has begun a full-throated campaign to overwhelm the immigration and asylum system.

If things continue at the current “caravan” pace, we should expect to see hundreds of thousands, if not millions more migrants flooding our Southern border in a concentrated effort to swamp our immigration/asylum system.

As of March, 2018, the American Immigration Council reported, “On average, asylum seekers had to wait around 1,000 days for their cases to be reviewed in an immigration court.” And these “wait” times will increase exponentially as more caravans arrive. This is not happening organically or coincidently. This is Cloward and Piven type design.

And lastly, our election system. As we’ve just witnessed, our election system hasn’t yet been overwhelmed, but is rapidly on its way. Aided by fraudsters like those in Broward County, Fla., early and absentee voting, same day registration and no ID required polling places, our system is heading for collapse.

Another way to facilitate a Cloward and Piven type collapse is the growing popularity of Automatic Voter Registration (AVR).

Although AVR is spoken about little, it is an insidious program. According to the Brennan Center for Justice, a leftist social justice think tank, “Automatic voter registration (AVR) is an innovative policy that streamlines the way Americans register to vote. AVR makes two simple, yet transformative, changes to the way our country has traditionally registered voters.”

Notice the word “transformative.” The left loves this word, as it precisely describes their intentions for our nation.

AVR states that any citizen “who interacts with government agencies are registered to vote or have their existing registration information updated, unless they affirmatively decline.” In other words, all who receive welfare, food stamps or any other form of government assistance are automatically registered to vote. If they choose not to be registered, they must take the initiative to “opt out,” or remove themselves from the voter roles.

They leftists designed this program knowing very well that few will go to the effort of opting out.

“Currently fifteen states and D.C. have approved the policy, meaning that over a third of Americans live in a jurisdiction that has either passed or implemented AVR.”

If things progress at this current pace of “transformation,” and if we don’t start waking up to this three-pronged attack, in 10 years or so, our constitutionally constructed America may be virtually unrecognizable.