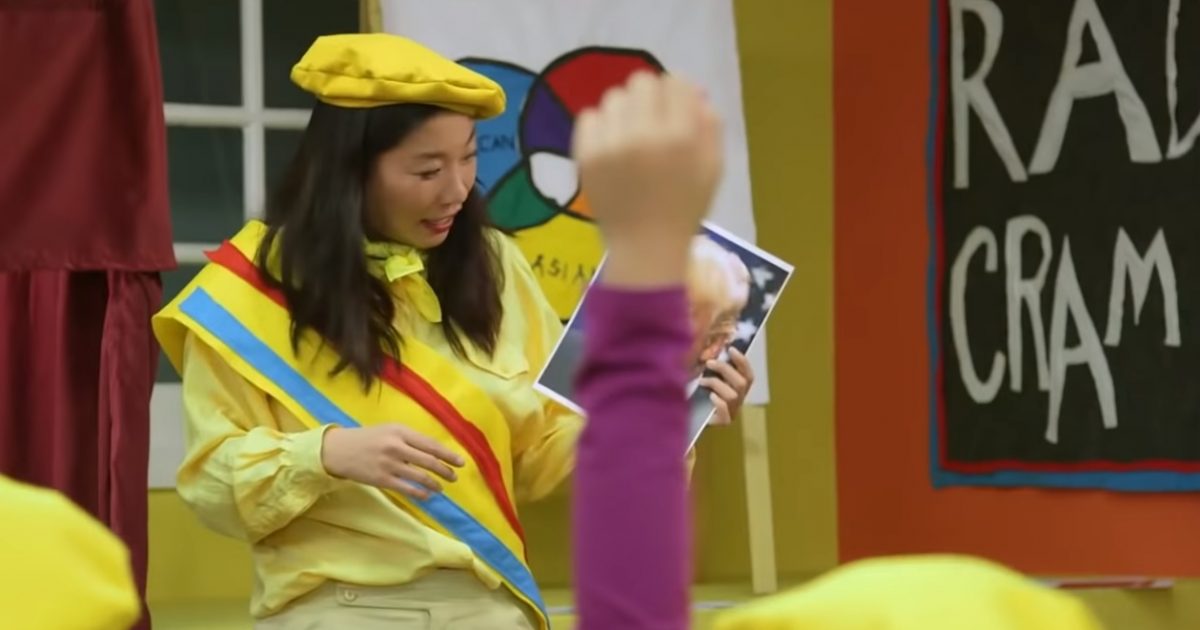 Kristina Wong is an American comedian, though like many in her line of ideology such as Kathy Griffin and Michelle Wolf aren’t really that funny.  Recently, Wong did a little video where she was indoctrinating her “little comrades” in the anti-American ideology of Communism and teaching them to abhor and hate white people, even though there was no reality to what she was saying.

Paul Joseph Watson demonstrates the utter insanity of Wong’s presentation and how she is was teaching them to hate white people.

Of course, Wong is a classic Marxist in attacking the family and specifically male headship in the family.

She wants to see if the children have been “tainted by the patriarchy,” to which one young girl asks, “patriarchy”?

Then a picture of Hollywood mogul Harvey Weinstein is revealed as if to suggest he is the model for patriarchy in America.

Interestingly enough, while one young girl says that “this thing about white people” is that is “just makes me feel like walking into the pool and they just give me the death stare,” the reality is that people like Kristina Wong have not just given the death state but have actually inflicted actual death upon millions of people.

,” which has obviously made lots of money for its creator, and there is clearly instruction to one of the little girls in her class to bad mouth white people for not wanting to hear what Hello Kitty (aka “Asian girls) has to say, as if to say a cartoon has anything other than what its creator has to say through it.

.  She happens to be an Asian woman!

But Wong doesn’t inform her little comrades of the facts, does she?  Nope, she’s like the other mental midgets and morally depraved who continue on about dozens of genders and how genders differentiate from sex in order to push Marxism on society.

“It’s so that people who look at her can project their own feelings onto her face, because she has an expressionless face,” said Saksena about why Hello Kitty doesn’t have a mouth.

Hello Kitty doesn’t have fingers or toes either.  Is that some sort of cryptic racist message too?  Hardly.

Finally, Wong parades a picture of President Donald Trump out and the kids lose their minds claiming that what they know about him is that he is “bad!”

When kids are asked about the border wall, which Donald Trump campaigned on and which both political parties have advanced at one time or another, these bright young minds declare that the wall hinders people from having a better life in America.

Little do these poor little minds full of mush realize that they are being indoctrinated to work to support the very people who “want a better life in America.”  That’s right they are being conditioned to accept and embrace their own slavery, and such slavery knows no ethnicity or skin color.

Of course, Wong also tells a really big whopper by stating that we all came from some other place before.

No, we didn’t!  Not everyone in America is an immigrant!  I wish people would start shutting this down when it is pontificated.

I was born in America, and so were millions of other people.  We weren’t nor have been immigrants. In God’s Providence, we were born citizens of this country.  True, our forefathers were immigrants, but that is not who we are.  We are native Americans, if you will.  We were born on this soil.

While Wong highlights one little girl who came with her mother from Cambodia, she forgets to inform the children that over a million Cambodians were slaughtered because of the very ideology that she holds to.

However, it was the evil, white, racist America that took in 158,000 Cambodians after Pol Pot’s Communism reached its logical conclusion in those murders.

However, Wong continues down the road of moral depravity, war against her Creator and utter madness in pushing “gender non-binary.”

I really do feel sorry for these kids having to sit through this indoctrination.  However, it makes me even angrier that their parents care so little for them as to not only be used by the likes of Kristina Wong, but to be indoctrinated by her.

Of course, all Wong is pushing is child abuse not education.

People like Kristina Wong belong in a straight jacket in a mental ward, not teaching children.  She’s crazy, literally.

Of course, when you go to Wong’s video on YouTube, the comments are disabled.  This is so people won’t be able to point out the obvious lunacy that she is promoting among impressionable, young minds.

Using kids in this manner, as political weapons, says Watson, is exactly why every parent should homeschool.