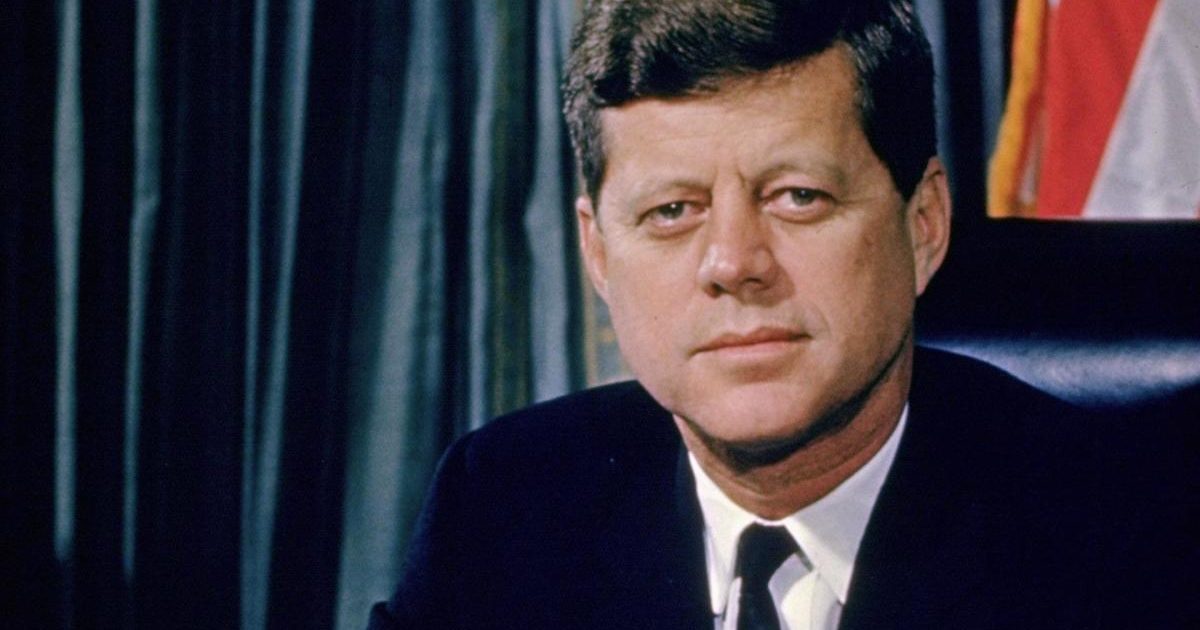 “The Pilgrims, after a year of hardship and peril, humbly and reverently set aside a special day upon which to give thanks to God …

I ask the head of each family to recount to his children the story of the first New England Thanksgiving,

thus to impress upon future generations the heritage of this nation born in toil, in danger, in purpose,

and in the conviction that right and justice and freedom can through man’s efforts persevere and come to fruition with the blessing of God.”

While visiting the home state of his Vice-President, Lyndon Baines Johnson, on November 22, 1963, John F. Kennedy was shot in Dallas, Texas.

The youngest President ever elected, being 43 years old, he was also the youngest to die, barely serving 1,000 days.

Kennedy was on his way to the Dallas Trade Mart to deliver a speech, in which he had prepared to say:

“We in this country, in this generation, are – by destiny rather than choice – the watchmen on the walls of world freedom.

We ask, therefore, that we may be worthy of our power and responsibility,

that we may exercise our strength with wisdom and restraint, and

that we may achieve in our time and for all time the ancient vision of peace on earth, goodwill toward men …”

“That must always be our goal – and the righteousness of our cause must always underlie our strength.

For as was written long ago, ‘Except the Lord keep the city, the watchman waketh but in vain.'”

“The very word ‘secrecy’ is repugnant in a free and open society; and we are as a people inherently and historically opposed to secret societies, to secret oaths and to secret proceedings …

We are opposed around the world by a … ruthless conspiracy that relies primarily on covert means for expanding its sphere of influence – on infiltration instead of invasion, on subversion instead of elections, on intimidation instead of free choice, on guerrillas by night instead of armies by day.

It is a system which has conscripted vast human and material resources into the building of a tightly knit, highly efficient machine that combines military, diplomatic, intelligence, economic, scientific and political operations.

Its preparations are concealed, not published. Its mistakes are buried, not headlined. Its dissenters are silenced, not praised. No expenditure is questioned, no rumor is printed, no secret is revealed.”

Another person addressing the threat to freedom was Lutheran minister Richard Wurmbrand.

In 1948, he was arrested by Socialist Republic of Romania and was tortured 14 years in prison. His wife, Sabina, was sent to labor camp.

After years of persecution and international pressure, the Wurmbrands received amnesty. In 1965, he testified before the U.S. Senate’s Internal Security Subcommittee.

In 1967, Richard and Sabina Wurmbrand formed Jesus To The Communist World, renamed Voice of the Martyrs.

“Every freedom-loving man has two fatherlands; his own and America … America is the hope of every enslaved man, because it is the last bastion of freedom in the world.

Only America has the power and spiritual resources to stand as a barrier between militant Communism and the people of the world.

It is the last “dike” holding back the rampaging floodwaters of militant Communism. If it crumbles, there is no other dike, no other dam; no other line of defense to fall back upon.

America is the last hope of millions of enslaved peoples …

I have seen fellow-prisoners in Communist prisons beaten, tortured, with 50 pounds of chains on their legs – praying for America … that the dike will not crumple; that it will remain free.”

In the Union of Soviet Socialist Republics, Alexander Solzhenitsyn was imprisoned, from 1945 to 1953.

After intense international pressure, he was released and traveled to Washington, D.C., where he stated June 30, 1975:

Over there people are groaning and dying and in psychiatric hospitals. Doctors are making their evening rounds, for the third time injecting people with drugs which destroy their brain cells …

They are trying to weaken you; the are trying to disarm your strong and magnificent country in the face of this fearful threat-one that has never been seen before in the history of the world.

I call upon … ordinary working men of America … do not let yourselves become weak.”

“The United States as the last bastion of Western civilization, facing an Islamic Europe …

Muslim neighborhoods … are mushrooming in every city across Europe.

These are the building-blocks for territorial control of increasingly larger portions of Europe, street by street, neighborhood by neighborhood, city by city …

“In many cities the majority of the under-18 population is Muslim.

Paris is now surrounded by a ring of Muslim neighborhoods. Mohammed is the most popular name among boys in many cities … In once-tolerant Amsterdam gays are beaten up almost exclusively by Muslims.

Non-Muslim women routinely hear ‘whore, whore’ … In France school teachers are advised to avoid authors deemed offensive to Muslims … The history of the Holocaust can no longer be taught because of Muslim sensitivity …”

“In England sharia courts are now officially part of the British legal system. Many neighborhoods in France are no-go areas for women without head scarves …

Jews are fleeing France in record numbers, on the run for the worst wave of anti-Semitism since World War II …

“Much of this street violence … is directed exclusively against non-Muslims, forcing many native people to leave their neighborhoods, their cities, their countries …

Muslims are now a swing vote not to be ignored. Mohammed’s … behavior is an example to all Muslims …

If Mohammed had been a man of peace, let us say like Ghandi and Mother Theresa wrapped in one, there would be no problem …

Islamic tradition tells us how he fought in battles, how he had his enemies murdered and even had prisoners of war executed. Mohammed himself slaughtered the Jewish tribe of Banu Qurayza …

Islam means ‘submission.’ Islam is not compatible with freedom and democracy, because what it strives for is sharia.

If you want to compare Islam to anything, compare it to communism or national-socialism, these are all totalitarian ideologies …”

“There is a danger greater danger than terrorist attacks, the scenario of America as the last man standing … With an Islamic Europe, it would be UP TO AMERICA ALONE to preserve the heritage of ROME, ATHENS and JERUSALEM.”

“Preservation of these rights is vitally important now, not only to us who enjoy them-but to the whole future of Christian civilization.”

“Upon this battle depends the survival of Christian civilization …

If we fail, then the whole world, including the United States, including all that we have known and cared for, will sink into the abyss of a new Dark Age made more sinister, and perhaps more protracted, by the lights of perverted science.”

Roosevelt was 42 years old as Vice-President when President McKinley was assassinated in 1901.

There are such ‘social values’ today in Europe, America and Australia only because during those thousand years the Christians of Europe possessed the warlike power to do what the Christians of Asia and Africa had failed to do – that is, to beat back the Moslem invader.”

“In NO OTHER PLACE and at NO OTHER TIME has the experiment of government OF the people, BY the people, FOR the people, been tried on so vast a scale as here in our own country …

Therefore, in thanking God for the mercies extended to us in the past, WE BESEECH HIM that He MAY NOT WITHHOLD THEM IN THE FUTURE.”

On February 9, 1961, President Kennedy remarked at a Breakfast for International Christian Leadership:

The guiding principle and prayer of this Nation has been, is now, and shall ever be ‘IN GOD WE TRUST.'”

“This country was dedicated to … two propositions.

… The Puritans and the Pilgrims of my own section of New England, the Quakers of Pennsylvania, the Catholics of Maryland, the Presbyterians of North Carolina, the Methodists and Baptists who came later,

all shared these two great traditions which, like silver threads, have run through the warp and the woof of American History …

First, a strong religious conviction, and

secondly, a recognition that this conviction could flourish only under a system of freedom.”

WILLIAM J. FEDERER is a nationally known speaker, best-selling author, and president of Amerisearch, Inc., a publishing company dedicated to researching America’s noble heritage. He is also the owner of American Minute and the author of several books

Video: Protester Rips MAGA Hat From Teenager’s Head, Tosses It Over Wall & Cusses Him Out
July 6th, 2020 Flag And Cross

Bill Gates: Propagandized “Second Wave” Will Get Our Attention