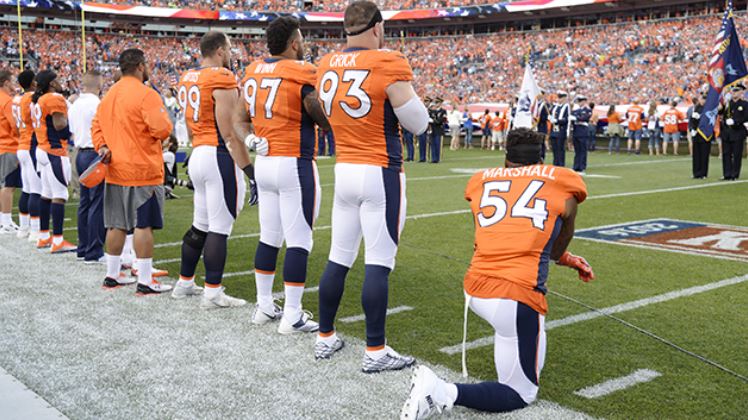 Football was once the place Americans could go to get away from anxiety, division, and politics.

No more. Colin Kaepernick’s decision to kneel for the National Anthem during the 2016 season has set off a chain reaction of sorts, one that is seriously threatening America’s pastime.

Facing the prospect of being cut by the 49ers prior to the 2017 season, Kaepernick opted out of his contract with the team. When he didn’t land on another NFL team, ESPN, Bleacher Report, and other media spent months accusing NFL owners of blackballing the quarterback for taking a stand on social justice (and largely ignoring facts that didn’t support the narrative).

This prompted more protests, which precipitated America’s commander-in-chief to weigh in on the topic—which incited an even greater media frenzy and accusations that the president was exploiting the issue for personal gain. (He probably is, but it’s rich hearing such accusations from ESPN, who has stoked the divisive Kaepernick story for months.)

Whether or not one approves of NFL players taking a knee or sitting during the National Anthem, there is one thing everyone agrees on: they have the right to do so.

“Free speech, which is enshrined right there in the 1st Amendment, is not something that you only get at certain times,” said CNN’s editor-at-large Chris Cillizza. “You get it all the time. It’s literally a founding principle of this nation.”

“It’s part of our democracy,” said the Patriots quarterback. “As long as it is done in a peaceful, respectful way, that is what our country has been all about.”

There’s just one problem. The 1st Amendment doesn’t work that way.  Anyone who’s ever bothered to read the U.S. Constitution knows that the 1st Amendment begins with, “Congress shall make no law ….”

But don’t take it from me. This is what legal scholar Teresa Stanton Collett had to say on the subject:

“I don’t watch football. I don’t care about football. But I do care about constitutional literacy. Please stop saying football players have first amendment rights to disregard the direction of their private employers while engaged in privately sponsored activities — which is what NFL football games are,” said Collett, a professor at the University of St. Thomas School of Law. “They have no more constitutional protection for their expressive activities than I do for mine at my private Catholic university. Any ‘rights’ they have are based on their contracts and employment law.”

Collett points to the case of Kelvin Cochran as an example of how few protections employees actually have. Cochran, a fire chief from Georgia, was terminated after a local councilman learned that he had published a book on faith that contained a few pages expressing support for the orthodox Christian view on sexual relations.

As private employees, NFL players have even fewer protections than Cochran. (Cillizza atually acknowledges this fact later in his CNN piece: “Yes, the NFL is a private association made up of 32 team owners. And, yes, as such, they have the right to fire or penalize an employee who, they believe, engages in conduct unbecoming to the team.”)

It’s also worth pointing out what the NFL’s game operations manual says on the subject:

“The National Anthem must be played prior to every NFL game, and all players must be on the sideline for the National Anthem.During the National Anthem, players on the field and bench area should stand at attention, face the flag, hold helmets in their left hand, and refrain from talking. The home team should ensure that the American flag is in good condition. It should be pointed out to players and coaches that we continue to be judged by the public in this area of respect for the flag and our country. Failure to be on the field by the start of the National Anthem may result in discipline, such as fines, suspensions, and/or the forfeiture of draft choice(s) for violations of the above, including first offenses.”

None of this, of course, means that teams should fine or fire players who decline to stand for the National Anthem. In my opinion, there is something unseemly and even authoritarian about compelling people to stand to honor a flag. But it’s also worth pointing out this is the same NFL that fines players for wearing the wrong color socks or bringing onto the field a towel that is not licensed by the NFL.

In any event, we should dispense with the idea that NFL players enjoy some magical constitutional right to express themselves during pre-game ceremonies. They don’t.