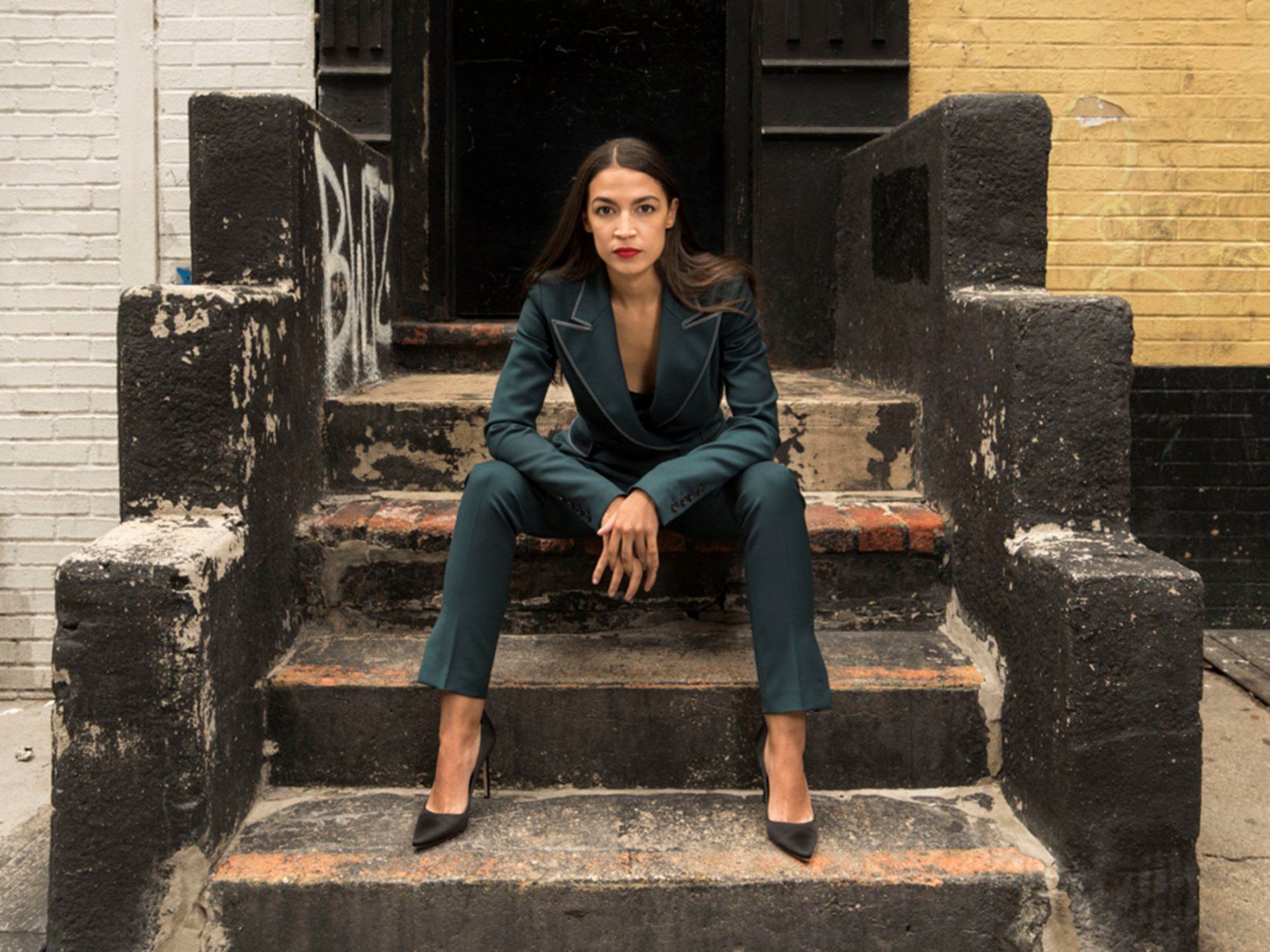 I receive near-daily emails from The Nation, the hard-left publication that never acknowledged a communist atrocity nor has recognized any socialist failure. From what I can tell, the editors are downright giddy, as they see socialism in the USA on the rise, with the bookends of the elderly Bernie Sanders on one side and the camera-friendly Alexandria Ocasio-Cortez on the other, both ably promoting socialism to a new generation of people ready to overthrow the alleged chains of capitalism.

My many writings on Bernie Sanders do not need anything new to add. If his past association with groups supporting the murderous and violent Leon Trotsky and Che Guevera do not discredit him with the modern media, then nothing will, and no further expose of his utterly-flawed worldview will change any minds or educate an adoring media that refuses to recognize the evils of totalitarianism.

In the end, however, Ocasio-Cortez presents a different challenge. First, and most important in this media age, she is photogenic, and that matters in a media-dominated world. Second, and even more important, she is photogenic and is a leftist, which means the media will not give her the Sarah Palin treatment and being both pretty and ditzy – even as she makes claims such as the unemployment rate is low “because everyone is working two jobs.” (Yes, she really said that.) Palin, as one might remember, was a popular governor in Alaska before her fateful plunge into the John McCain shark tank, which means she at least had some previous success in governing, unlike Ocasio-Cortez, who is a political neophyte. That means she can appear on the Late Show with Stephen Colbert, say something utterly inane, and still garner applause and not have to face much media scrutiny for her remarks. Palin never had that luxury.

The lack of media accountability for Ocasio-Cortez is not due to temporary amnesia by American journalists; these people are True Believers when it comes to socialism, and especially its political cousin, democraticsocialism. As I have written before, electing economic “planners” via majority votes solves none of the intractable problems of economic calculation that Ludwig von Mises pointed out nearly a century ago. Theterm “democratic” does not suddenly allow the moribund doctrines of socialism to come alive and actually make sense. However, to most American journalists, “democratic” covers a multitude of errors and magically transforms socialism into something it never has been.

When one steps back and takes a broader look at the Ocasio-Cortez phenomenon – the belief that a political rookie somehow can transform socialism, a system known for failure and repression, into paradise by just her sheer force of presence – one must better understand the current intellectual landscape that progressives have created. We are seeing a huge clash of visions and worldviews, not to mention a difference in the interpretation of what we see (or don’t see) in front of us.

As one who has been part of the libertarian and free-market world for nearly four decades (my first Freemanarticle was published in 1981), I have adopted the economic viewpoint that a market economy is a marvel of interdependent actions involving millions of people and billions of prices that produces goods that meet our needs and make our lives better. What people have been able to accomplish in the pursuit of profit truly is amazing, and one of the results – lifting billions of people out of absolute poverty – is an accomplishment that no one who took part actually intended to happen. I see how a price system works and agree with F.A. Hayek that it cannot be the result of “deliberate human design,” but rather allows humans to advance civilization while trying to advance their own interests.

That last part is utterly contradictory to progressives who believe, as did Jeremy Bentham, that there is no “natural” harmony of human interests, but rather than human advancement only can come through the imposition of “artificial” constructs placed before us by Really Intelligent People (like Joseph Stiglitz and Paul Krugman, both of whom fully accept the Benthamite paradigm). Progressives believe that civilization is advanced – and also retreats – through abrupt changes brought about by leaders, both good and bad.

Stiglitz and Krugman, for example, believe that Franklin D. Roosevelt through the New Deal crafted a near-magical economic system that “created the middle class,” reduced economic inequality (which supposedly eliminates a “cause” of boom and bust cycles), and raised the overall standard of living. Not surprisingly, Stiglitz taught many years at Columbia University, which also had employed many members of the FDR “Brain Trust” of Really Intelligent People who allegedly had all (or most) of the answers on how to organize the world.

According to the progressives, the New Deal, with its organization of much of the economy into a series of regulated cartels and emphasis on organizing labor, brought the nation into ever-increasing circles of prosperity. (That unemployment remained well in double-digits all through the 1930s is irrelevant to progressives.) The FDR-created economic success steamed nearly unabated through the 1970s. Suddenly out of nowhere, they argue, Ronald Reagan and Margaret Thatcher leaped onto the scene and shattered the ring of prosperity, peddling the snake oil of “free markets.” The masses believed this nonsense (despite the fact, at least according to progressives, that the economies of the USA and UK were doing just fine) and elected these charlatans who then imposed total, untrammeled free enterprise and getting rid of the entire regulatory structure. The results, claim Stiglitz and Krugman, were obvious: economic inequality, a declining standard of living, and a general worsening of life for all but the one-percent who actually benefitted from capital accumulation.

It does no good to present the statistics that say otherwise, that point out living standards in this country have risen greatly in the past four decades, that consumer choices have exploded, and that billions of people worldwide have risen from absolute poverty because of the growth of private enterprise. Narratives are narratives. Either progressives deny there has been progress, or they claim that any progress is due to pockets of socialism and government planning. A price system, according to Stiglitz works only under “perfectcompetition,” and, as everyone knows, there is no such thing as perfect competition. Thus, by definition, only government through Really Intelligent People and sheer force can make an economy work correctly.

That is the progressive world that supports Ocasio-Cortez. It is a narrative-driven world that holds that if the people in power exert enough political will, they can impose a socialist regime that will perform better than what we see in places like Cuba, North Korea, or Venezuela. (And I should point out that progressives over the years have held up these very places as regimes to emulate.) If one brings up the requirement of profits and losses, free prices, and private property that are necessary for economic calculation, they simply reply that they have a better path, that that relies on democratic election, putting Really Intelligent People into power, determining the “needs of society,” and then using “incentives” (negative and positive) to direct people toward the actions deemed necessary by the Really Intelligent People to meet social needs. In the process of directing resources toward their highest social values (as determined by the Really Intelligent People) all workers will be well-paid and be employed in socially-meaningful work that gives them significance and is non-exploitative. All it takes is political will to implement paradise.

Because Ocasio-Cortez is relatively young and attractive, along with being committed to socialism, she supposedly has the capabilities to team up with Bernie Sanders and bring about socialism that will not result in a loss of liberties, or drive whole societies into poverty, or at least that is what progressives believe. The reason she can do this is that she is young, attractive, connects with her audiences, and is committed to socialism. Oh, and despite her inane statement on why unemployment is low, she is a Really Intelligent Person, something that is obvious because she is young, photogenic, and committed to the socialist cause.

The other world characterized by scarcity, incomplete knowledge, uncertainty, and opportunity cost is nonexistent in Ocasio-Cortez World. These terms are mere ruses invented by capitalists in order to trick workers into being exploited. Scarcity is an artificial construct created by monopolies to impose predatory capitalism and force people into poverty. Progressives believe that we are not lacking resources or the means to use them toward productive ends, but rather our society and especially our political institutions lack the necessary political will, and that is because the economists who have supported the plutocrats have painted a false picture of the economy.

Trying to explain economics to progressives is like trying to explain how a satellite orbits the planet to a flat-earth believer. Someone who believes that the Diamond-Water Paradox is nothing more than a rhetorical trick is not going to believe that economic calculation has a role to play in the production and distribution of medical care or housing or food or anything else a progressive claims to be a human right, or believe that an entire economy cannot be directed from a single office in Washington, D.C.

It is doubly-ironic that Ocasio-Cortez was an economics major at Boston University, although one doubts that economics taught there would differ from the usual statism that dominates most college economics programs. One doubts that she intellectually internalized anything that would resemble price theory and certainly would not be able to identify anything resembling a shortage or surplus. That she will advocate for government intervention and establishment of programs that almost certainly will lead to shortages should not be lost on anyone.

William L. Anderson is a professor of economics at Frostburg State University in Frostburg, Maryland.