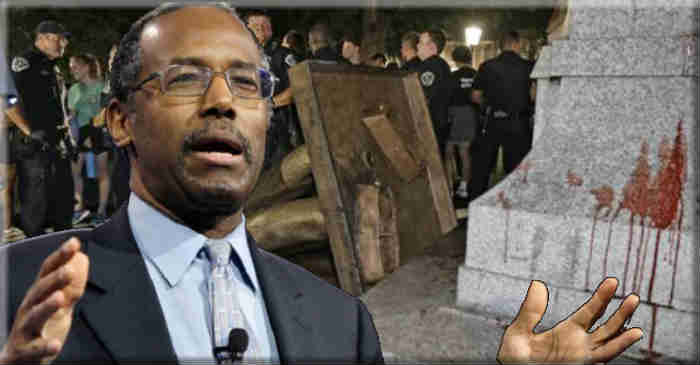 The Benjamin Carson High School of Science and Medicine near the Detroit Medical Center has an ambitious program of preparing its mostly African-American students for careers in medicine.

Students from Ben Carson High recently toured a hospital and experienced what it’s like to be doctors.

The school’s name, in its own words, honors “Dr. Benjamin Carson whose journey from impoverished, inner-city Detroit youth to acclaimed neurosurgeon is remarkable and is a constant reminder to Benjamin Carson students that their career dreams are achievable.”

The Detroit school board voted to rename the school under guidelines that say a school can be renamed when it doesn’t reflect the student population or when “information newly discovered about the current name of the school is negative in nature.”

LaMar Lemmons, a Democrat, was the leading advocate for removing Ben Carson’s name from the school. Lemmons, who along with his wife, Georgia Lemmons, sits on the school board, has used his position to blame Michigan’s emergency managers for all of Detroit’s self-created problems.

Lemmons, a “Bernie-crat”, also got his completely unprepared sister-in-law elected to the State Senate.

“Quite frankly, it is a political thing,” he admitted. “We named a school after an individual who is in the Trump administration.”

The Democrat insisted that having a medical sciences school named after a brilliant African-American surgeon from Detroit was “synonymous with having Trump’s name on our school in blackface.”

“When you align yourself with Trump, that is a direct affront to the city of Detroit and the students of Detroit,” he insisted.

If the name change goes forward, it may be the first instance of a school being renamed because it was named after a Republican.

Lemmons is okay with a school being named after a white slaveholder, but not a black conservative.

“Lewis Cass was a slaveholder,” Lemmons said. “But I would never recommend changing the name of Cass.”

Also on the nomenclature chopping block, for unclear reasons, is the Frederick Douglass Academy for Young Men.

Ben Carson isn’t the only African-American conservative being targeted by the renaming squad.

The petition was put forward by a former student named Sage Lucero. Clarence Thomas is the grandson of sharecroppers from rural Georgia. Lucero is a Brooklyn hipster and junior copywriter.

Lucero’s illiterate petition demanded that the Center be renamed after Anita Hill, “A woman who stood up for herself despite being denied of true justice.”

She ranted that Justice Thomas “wrongfully won against a woman’s word.”

The building was named after Thomas because he had served there as an altar boy.

Instead of filing the petition in the internet’s underwear drawer, the media hurriedly amplified the white leftist’s grievance against the highest ranking African-American judge in the country. One media outlet breathlessly reported that the petition had over 500 signatures. And then actually interviewed Sage.

The president of the Savannah College of Art and Design (or, as Sage put it, “one of the president’s”) actually contacted her about her ridiculously ignorant petition.

“I don’t want any other female who has hopes and dreams to have to walk through the doors of that building,” Lucero, who lives in New York, insisted.

She also claimed that “many of the students feel unsafe about the building” and that she wanted to start a conversation about “diversity” by taking a black man’s name off a building.

When Lamar Bowman wrote a counter-petition that received over 20,000 signatures, no one in the media interviewed him to learn why he thought that Thomas’ presence on campus spoke of its “dedication to the struggles and achievements of millions of African Americans.”

Or why he wrote that Thomas’ story “is one that I want my children to know and understand.”

Lamar’s story, like Thomas’ story and Carson’s story, is not the story that the media is interested in.

It took protests from Capitol Hill for Smithsonian’s National Museum of African American History and Culture to include Clarence Thomas. But not before it had included Colin Kaepernick and Anita Hill.

When the renaming cultural revolution took off, it was under the guise of fighting racism. And now it’s come full circle to fighting against the legacy of conservative African-Americans.

The parade of renamings has drifted into the realm of the ridiculous. In Portland, Lynch Meadows, Lynch Wood and Lynch View elementary schools were renamed because they had the word, “Lynch” in them. The schools were named after Patrick Lynch, a berry farmer, who donated some land to build schools.

Renaming schools named after a berry farmer, who shares a last name with former Attorney General Loretta Lynch and numerous other African-Americans, has nothing to do with fighting racism.

Political correctness doesn’t actually fight racism. It only pretends to do so, exploiting outrage over racism to justify its power grabs. The point of renaming a school named Lynch isn’t to fight racism, but to wield the power to rename schools. Renaming educational institutions and buildings named after African-American conservatives however is the core purpose for which that power is truly wielded.

The renaming revolution was not about fighting dead Confederate generals. It was a convenient pretext for legitimizing a politically correct purge. Outrage over racism and slavery was used to build a movement whose ultimate targets were not dead 19th century rebels, but living conservatives.

Including the greatest threat of them all, African-American conservatives.

The Left begins by fighting racism and then implements it.

The existence of a Clarence Thomas or a Ben Carson undermines the ideological infrastructure that has been used to silence hundreds of millions of Americans in the name of millions of African-Americans who never sought such a silencing. The renamings don’t just attack Carson or Thomas as individuals, they erase their existence. This political genocide removes people whom the Left thinks shouldn’t exist.

Political correctness exploits the suffering, the history and the bodies of African-Americans to suppress other African-Americans. While it divides the country along racial lines, it also divides racial groups internally, putting its activists in charge of forcing African-Americans into conformity with the Left.

It tells the students at Benjamin Carson High School of Science and Medicine that they shouldn’t learn from his journey or adopt his values. They shouldn’t aspire to be successful surgeons, but aggrieved victims whose only purpose is to serve as foot soldiers in the culture wars of their leftist masters.

The students at Benjamin Carson High and at the Savannah College of Art and Design are that future. By destroying the past and present of African-American conservatism, the Left hopes to destroy its future.